Zhujiajiao, a "Venice" of China 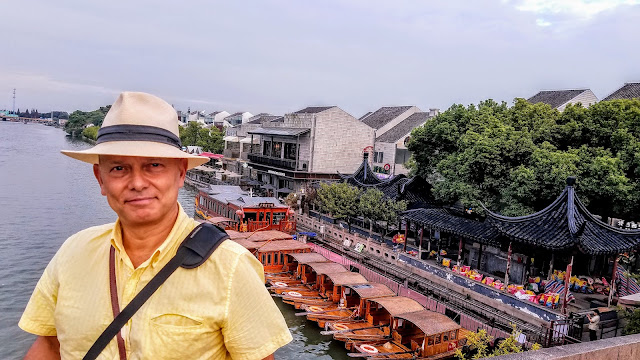 Today we take the metro from Shanghai for this special village. Good system, the trains run frequently and are comfortable and, unlike the subway stations, are air-conditioned. The ticket one way is 8 Rmb (1 euro) for a longish ride, I did not keep track of time but maybe one hour.

Comfortable and fast ride, only waited a few minutes, trains are quite frequent. One reason the trains are comfortable is that the A/C works well, which cannot be said for the stations where it feels a bit sticky.
While we wait for the trains I notice some lines on the platform, which mark the place where people should stand in a queue to board, after having let passengers get off first. The train comes to a gentle halt a few seconds after a polite voice announces its arrival  in Chinese and English - but it does not say "mind the gap!" No one stays in line, most people rush for the door without worrying about passengers who try to get off. I recall much more disciplined tube riders in Singapore and Hong Kong...
Zhangjiajie is a small village which now lives of tourism, there are myriad restaurants and souvenir shops everywhere, but it does still have a charming atmosphere. And lots of canals, for which is it often referred to as the "Venice of China" One of the Venices of China actually, the most well-known one is Suzhou. How come every town in the world with a few canals has to call itself "Venice"?? Anyway, true to its nickname, there are no cars, not even bikes; just canals and stone bridges.
When we get out of the subway station it's just a short walk to the old village, but an entrepreneurial middle-aged man approached us and offers a ride on his tricycle to "the heart of the town". He expects a tip of course, but this is much less than the cost of the ticket we would have to pay to enter the historic center of town, an attraction in and of itself.
The first thing I notice once we are on our own is gondolas. They are not nearly as elaborate and impressive as those in the real Venice, but still, they do take tourists around the canals for a picturesque view of the village from the water. For a fee of 80 Rmb per boat, not per person, we get less than 10 minutes, a rip-off as bad as the real Venice, luckily we share with 4 others. Never mind.
Of course, like for everything else, Lifang pays for this with her omnipresent and seemingly omnipotent Wechat pay app. She has yet to use cash once since we arrived in China. I am the only one to do so it seems, I feel so old!
Lunch at a quaint restaurant by the water. Lots of different dishes, I loved slightly spicy fresh-water snails and chicken paws. 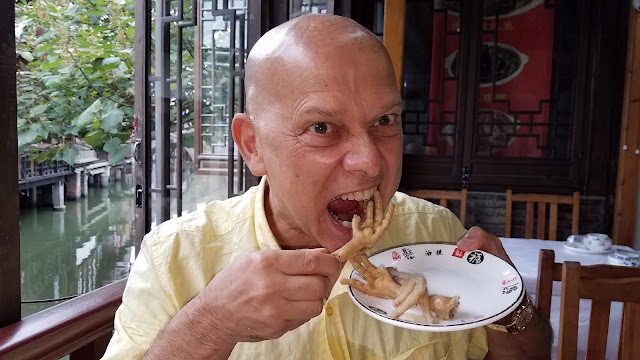 We don't have an internet connection but the waitress sets up a mobile Hotspot and all Lifang needs to do is to scan the restaurant s bar code and we're done! sometimes a shop will scan her barcode, on her phone, same thing...

Shopping is interesting, we find a small workshop that sells cotton embroidered shoes made by a local shoemaker, 250 Rmb for a pair. Very comfortable and you can only buy them here. he says he does not want to sell online, I wonder why. Maybe he does not have enough to satisfy online demand and cannot scale up. The shoes are pretty, comfortable and affordable.

Dinner by the main bridge. A nice table by the canal. The owner is quite loquacious, he comes over and is quite willing to spend time with us. Perhaps because I seem to be the only tourist around, at least the only non-Chinese tourist. He said the restaurant has been around since 1938, and his family has always lived upstairs. He also worked also during the Japanese occupation. Unline most Chinese I meet to he does not seem to feel much resentment toward Japan. Not anymore anyway.

After the Communist victory in 1949, his family was no longer allowed to run the restaurant as a private enterprise and they all got jobs as workers or employees in the public sector.

in 1998 he lost his job, thought about what to do with the rest of his life, and as he had some money saved away the following year reopened the restaurant in the same location where his father had it before. This is one of the few times we paid with cash, we're offline somehow!

Dinner is big black seashells stuffed with pork, bizarre pairing but it tastes good, a strong flavor yet not spicy! Shoots of water bamboos, fried chicken to complete the menu.
Partly because of the tasty portions that kept landing on my plate, partly because I enjoyed listening to the stories of the owner, and perhaps most of all because of the romantic setting I was enjoying with my wife, especially after they turned on the amber lights of the bridge, suddenly we realized it was getting late and we risked missing the last subway train back to Shanghai.

Exit n. 2 was not easy to find. We asked many local people working in the shops for directions, it was the end of the day and business had slowed down, some shops were beginning to shut down. Still, they were all busy with their phones and we had to insist every time to get their attention.

When we finally got out of the old city we waited at the bus station but no bus materialized. By now clearly worried we might have to spend the night here, Lifang asked a couple on an electric motorcycle and they pointed to another bus station a few hundred meters away. When we arrived we're the only passengers for the lonely bus in the empty parking lot, the last of today. The driver sat casually in his office playing with his phone. He said we needed 1 Rmb per person to buy our tickets: cash only! No cards, no Alipay, no Wechat pay. It must be the last place in China to require cash.

Well, we are in luck, I thought, as I pulled a 10 yuan note from my wallet. (Lifang did not have any cash, I think she has not used any in China for the last decade.) But no, the driver does not have any change. I was ready to give him 10 yuan for 2 yuan worth of tickets, of course, just to get out of here, but this would have meant being overcharged by 400% and Lifang would not countenance that option at all.

She ran to the last car in the adjacent parking lot as it was leaving and asked them to change our bill, but they did not have any change either. However, they did give her a 1 yuan coin. She thanked them and pointed her open hand (the Chinese never use the index finger to point at someone or something) to me, and said something along the lines that it would have been nice to take her husband back to Shanghai as well. So the generous car driver gifted us another coin.
How generous! In my limited experience, the Chinese usually are not so generous. I've never seen anyone giving any change to a beggar in the street. Maybe that's one reason why there are not so many beggars, it's not a good use of their time on the street.

Or on the subway for that matter. When we finally reached the subway and caught the very last train to Shanghai, we saw a musician walking along the train car playing a strange kind of clarinet but no one gave him any money at all.
Posted by Marco Carnovale