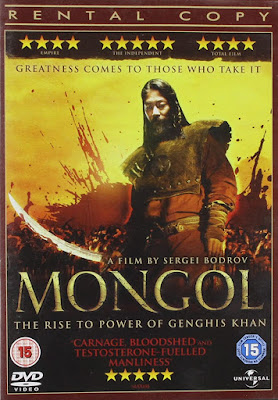 The first part of a planned trilogy, the film focuses on the future ruler's brutal childhood, as he suffers starvation and slavery, through to the battle that would cement his power.

Inspired by a poem translated from the Chinese that supposedly tells of Khan's formative years, director Sergei Bodrov ('Prisoner of the Mountains') offers a multidimensional portrait of the conqueror, focusing on the deep relationship he had with his beloved Borte (Khulan Chuluun) who was not only his wife but his most trusted advisor.

Temüjin pledges to unify all of the Mongol tribes, and eventually does, and imposes three basic laws for them to abide by: never kill women and children, always honor your promises and repay your debts even at the cost of your life, and never, ever betray your Khan.

A gripping tale of the cruel life in the steppe at the time of the rise of the Mongol empire, which would go on to take over most of China and establish the Yuan dynasty in the 13th century. Kublai Khan, who was the Emperor of China at the time of Marco Polo’s travels, was the grandson of Genghis, the protagonist of this film.

Other films about China are reviewed here in this blog.