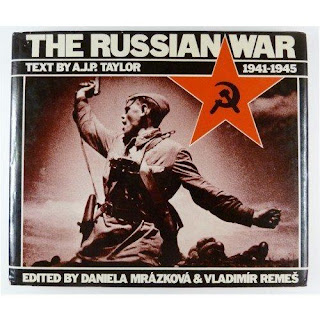 From the time of the German invasion of Russia in June 1941 until the Soviet armies marched into Berlin in 1945, six million Russian soldiers were killed and 14 million civilians were murdered by the Germans.
In the West, we forget that for most of the war Soviet armies contended against nine-tenths of the German army and never against less than three-quarters of it. Throughout this war a brave band of Soviet photographers were recording the events at a remarkable closeness to the field of action - often alternating between lens and pistol. These photographs have been arranged to form a story that begins with the Nazi assault along a 1200-mile Russian front and ends four years later when the Red Flag was raised over the Reichstag. A J P Taylor introduces each chapter with a brief narrative and an account of the photographers particularly involved. "Those who look at the photographs assembled here will, I hope, be moved," he writes. "They are a twentieth-century equivalent of War and Peace, transmuting human experiences into a vision of grandeur."

This is an exceptional collection of 143 B&W Soviet photographs from throughout the course of WW II. Some pictures have been so widely reproduced that they will be familiar to any student of the war, like Khaldei's shot of the Soviet soldier raising the red flag on the Reichstag, or Alpert's photo of a Commissar leading the troops into action, which is the cover of the book. Others are much less known.

Photographers like Lipskerov and Zelma were at the frontline of Stalingrad, and Kudoyarov spent the whole of the 900 days of Leningrad's siege in the city.

This book is the work of two Czechoslovak editors, and for some reason it has not been published in the USSR itself. Interestingly, most of the pictures were taken with a 35mm German Leica camera, the standard at the time.

In my view, several pictures have been staged, but this is normal in wartime and one must remember that the USSR, like all other countries, used photography as a wartime propaganda tool, during and after the duration of the war.