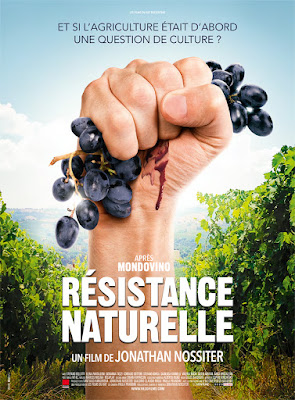 Ten years after the landmark wine documentary Mondovino, filmmaker Jonathan Nossiter returns to the subject, documenting the drastic shifts that have affected the industry in the time since. Natural Resistance follows four Italian winegrowers.

First is Giovanna Tiezzi lives in a converted 11th-century monastery, and grow grains, fruit, and wine in a way that links to their ancient heritage. She laments that much of Tuscany's vineyards have been bought up by foreigners, but then is proud that her region is a leader in quality vine cultivation.

Corrado Dottori is a refugee from industrial Milan, who inherited his grandfather's farmstead and tends to it as an expression of agricultural social justice. he studied capitalism at the Bocconi, he says, so as to criticize it better.

Elena Pantaleoni works her father's vineyards and strives to create a utopian reality.

A lot of ideology in this hastily put together film, which is really only a compilation of Nossiter's chats with the above growers over some wine.

The title "resistance" recalls the fighters of World War II against fascism and nazism, and it is not by chance. Nossiter, inserts several clips of Mussolini speaking from a balcony and SS guards rounding up civilians in this movie, and contrasts them with the heroic organic farmers, his partisans of today.

The other word in the title is "natural". The film compares and contrasts it with "artificial". And artificial (made by man with material that exists in nature) is not the same as "synthetic" (made through synthesis, transforming elements that do not exist in nature). Of course, all wine is artificial, it does not exist in nature.

Several of the protagonists complain about the DOC rules being abstract, detached from the criteria for quality that was the original reason for being created. In this they are right, and it has long widely been accepted that many top-quality Italian wines do not have, seek or need DOC certification.

The film nostalgically recalls when, in Italy, but the numbers are similar in other European countries, 60% of the people lived and worked on farms. Now it is about 2-3% depending on how you count it. Of course, every country that modernizes and develops moves from the primary sector of the economy (agriculture) to the secondary (manufacturing) and on to the tertiary (services). This brings higher standards of living, I find it hard to argue one should go back to the happy past.

The speakers are generally critical of the European Union Common Agricultural Policy (CAP). They argue it is a conspiracy to hand agriculture to big multinational corporations. Let alone that in several countries, Italy among them, EU subsidies (managed by regional administrations) are often left unused because small farmers do not bother to claim them.

They also argue that hygiene checks are targeted to create problems for small wine producers while they close an eye on the big ones. I do not know about the accuracy of this sweeping statement but they do not provide any evidence.

I also noticed a bias when a farmer shows Nossiter the difference between rich organic soil and standard vineyard next to it. The organic soil is a dark rich color and fluffy texture while the standard soil is hard and grey. But Belotti digs his organic sample near a plant and the other one on a pathway where constant traffic is expected to compact the soil. A careless test at best.

In sum, this film is more of an emotional call to arms than an analysis of the undoubted biological benefits of organic farming.


You can buy the DVD here 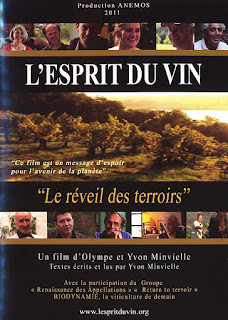 A film sponsored by Château Lagarette, a biodynamic producer in Bordeaux.

A dozen or so biodynamic wine-growers express their vision of the present and make proposals for the future.

They ask eminently social and even political questions: What food? How Could humanity restore the ideal of living together?

Through their stories, practices, and the accumulation of knowledge from their experiences, the producers of the film and a group of farmers, biodynamic wine-growers, try to open a path. They want to show how the spirit of bio-dynamics could provide answers to these questions.

This film is an all-out passionate defense of biodynamic viticulture. I say defense because most of the interviewees talk as if they are under siege, as if the evil forces of modernity are out to extinguish the feeble flame of tradition. No alternative point of view is presented in the film. If you want to hear alternative voices, skeptical or critical of biodynamic wine, you have to look elsewhere.

Clearly, the growers interviewed are very passionate about their wine, but often they get carried away. Just a few pearls from their statements. A basic theme of the film is a high level of hostility toward "technology": there is "technological" wine, which is artificial and then there is biodynamic wine, which is natural. Oddly, little attention is paid to organic wines, although biodynamic certification requires a wine to be organic to begin with.

A couple of speakers identify "technological" wines as the result of American influence and specifically the work of Robert Parker, while, on the contrary, "Europe" is the custodian of genuine winemaking. Well, Parker has nothing against biodynamic wines and actually promotes it. And, of course, there are lots of American biodynamic producers and in fact the USA is the biggest biodynamic farming producer in the world.

One speaker argues that biodynamic vineyards are better equipped to resist the negative radioactive impact of Chernobyl, thus lumping together as if it was a dogmatic truth a whole host of questionable assumptions.

A major problem for me is when, as several speakers repeat in this film, the argument is put forward that what is important in biodynamic wine is NOT the result, but the relationship between man and nature, a new philosophy of daily life. Assuming the latter is somehow better served in biodynamic farming, for me the end result, ie good and healthy wine, IS WHAT MATTERS.

Technology, a word that is often repeated with a grimace by many interviewees, destroys the relationship man and nature, farmer and vineyard. Biodynamic preparations restore the correct energy flows! A corollary of this argument is the open hostility of one speaker to established wine associations such as the Masters of Wine. In his view, these associations have been created to serve technology against the natural traditions of wine.

One speaker is very honest when he says biodynamic farming is like a religion: you can not demonstrate it, you can only believe it. Another one compares it to acupuncture: not scientifically proven, but many believe it anyway. Not surprising that biodynamic farmers also accept homeopathic principles, as they use extremely diluted solutions in some of their preparations.

A quirky claim toward the end of the film is that biodynamic wine is especially appreciated by women! Maybe so, as a woman grower claims to have produced a "concert wine" in her biodynamic vineyard because both wine and music share a spirituality for people to appreciate.

If you already believe in biodynamic farming this film will make you feel really good. If you are trying to understand more, it will give you only half the picture.

For a wise and cool view of the subject, read Jancis Robinson, one of the world's most respected authorities.

You can watch the film reviewed here on Youtube.

You can buy the DVD (in French as well as English) here on Amazon. Hard to come by and very expensive, however!