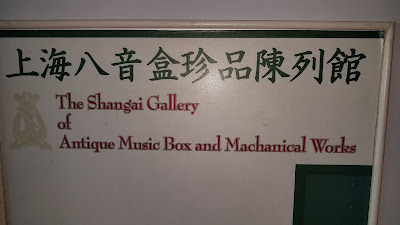 A remarkable personal collection, about 120 years old, now open to the public.

It is not among the most widely advertised attractions of this megacity, but it is well worth looking for in the Science and Technology Museum in Pudong.

music box museum we'd been told in Singapore, similar size but the experience is not as good. the young lady doing hourly tours does not know much, looks bored and cuts corners in her presentation. Here is a video of our visit.

We can also admire a 1750 "first": a singing birdcage, where an air pump pushes air through a flute to imitate a bird's singing. The bird has been constructed accurately, 250 parts in all, and covered in real feathers! 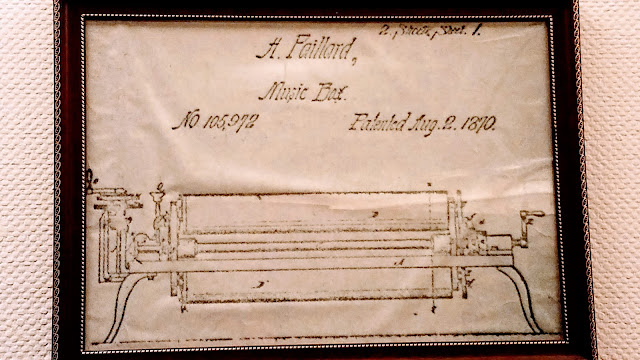 Some drawings and projects of music boxes complete the collection.

Too bad the museum is left in the hands of a bored and boring girl who makes a dull presentation, what a contrast with the enthusiastic older man who showed us the Singapore museum!

Today's lunch is at the "Ark" restaurant 2nd floor of a grey concrete building, like many others. Restaurants in China are often not at the ground level, like in Europe, but higher up. Someone told me it is because Chinese patrons like having their own private room, only for themselves and their friends, away from the prying eyes of others. And of course no windows on the streetside!

(On the other hand, doctors’ and dentists’ practices are often at the ground level, with large windows so that anyone passing by can almost literally look straight into the mouth of a patient while a tooth is being drilled.)

Large samples of Shanghainese cuisine, meat, and seafood, not spicy but intense flavors. 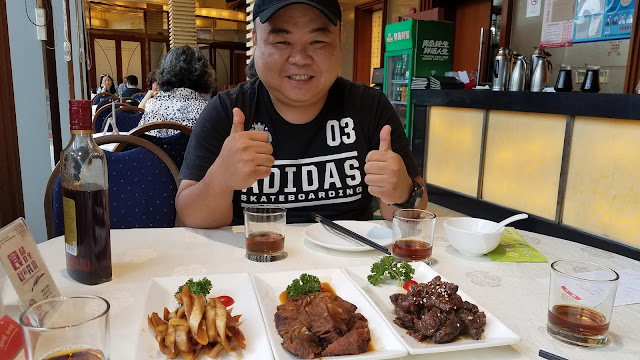 A few memories from the huge menu ordered by Qinlong: Shanghai baby eels, garlic oil pepper spring onion, fried fish, turnip, pork ribs, crab meet with crab roe, in whole orange with orange pulp and prawn,
Then, shanghai bun with sweet minced pork and crab and a pot of chicken, ginger, leek, with chicken stock lept warm in a pot on live fire which the waitress placed smack in the middle of our table. 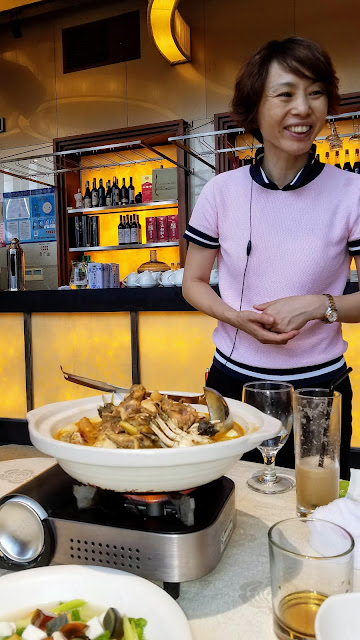 Following the above, asparagus with Tofu and "century egg", a chicken egg that smells from a kilometer away after it has been treated and "aged" for not quite a century but a few weeks and up to month or two.

All washed down with a drink of fermented sweet potatoes, rice and barley, just 11 abv, easy on the palate and well paired with the food.
I still preferred a mildly bitter but round and consistent local beer.
This was quite a treat by Qinlong, and although he is not a local in Shanghai by any means, he is from Leiyang like Carrie, but he works here and therefore considers it a sacrosanct duty to treat us to impress us. But I am sure he is genuine, he likes us and we like him, that was clear at his wedding a few months ago. 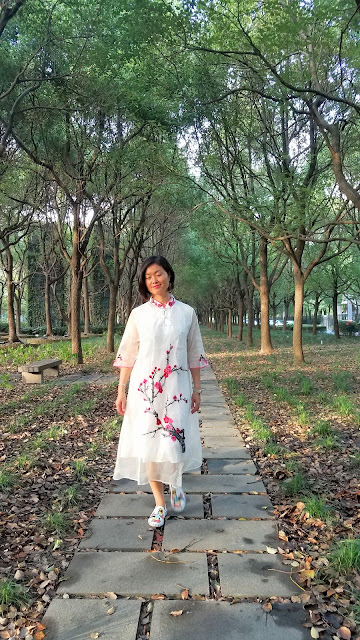 A walk in the beautiful "Century Park Garden" ends the afternoon with warm sunset rays that pierce through the thick branches of the tall trees near Century Square near the metro stop where we will catch a train to the hotel.
walk to subway station nearby, have to be careful with electric motorcycles, can't hear them coming! all motorcycle are electric haven't seen a single petrol engine on two wheels the whole time since I've arrived in China.

The Chinese planners are pretty good at building lots of cement, steel, and glass structures in their new cities but also much green space, and plant many trees all over the place.

Quite a few dogs without a leash, the Chinese are picking up a bad western habit.

Evening at the hotel's spa, we are not hungry after Qinglong's huge lunch and so skip dinner. In the pool, a child is learning to swim, still unusual in China, where most people, including divers, do not know how to swim.

Then we go to the famos Peace Hotel jazz bar and drink a good Belgian beer ! It is an old group made up of old players. They have been playing for 38 years, ie ever since they were allowed to play again after the death of Mao in 1978!

They play tunes from 1920 and 1930s, with a female vocalist for most of the program. Their sax player is the best, the others look tired, even bored. Some of the music we hear still got energy to it, some less. The bass player is 87 years-old. I am thinking: on one hand it's great he's still got energy but he's really just pinching one or two strings, not moving either hand, his notes are almost imperceptible. Maybe it's time he gave room to a younger player