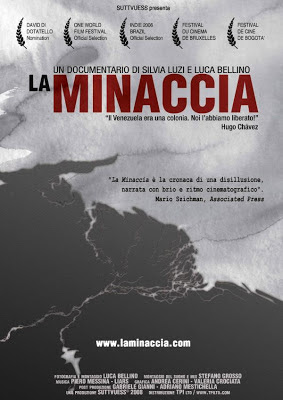 “Hugo Chavez and the Bolivarian Revolution are the greatest threat since the time of the Soviet Union and communism”. Doctrine for Asymmetric War Against Venezuela,  U.S. Army, 2006

This is the starting point for a journey across the country which gave rise to the “red wave” in Latin America. Does Venezuela represent the dream of a new socialist society or is it just another distortion of populism and dictatorship?
A trip with President Chavez over the largest oil reserve in the world, situated beneath the Orinoco river, becomes the occasion in which to enter into the lives of Venezuelans, nine years after the beginning of the Bolivarian revolution. The government missions to fight illiteracy and hunger, the creation of a public health care system and the development of an economy based on cooperative work are some of the achievements which characterize the Chavez era.

On the other hand are the country’s 60 violent deaths a week and its collapsing hospitals, the closure of the most popular television channel, the old European immigrants in flight, the opposition black list and the ubiquitous government propaganda. Venezuela en route to socialism: is this still possible in our post-ideological times?

This is an excellent documentary on Chavez's Venezuela. A couple of young Italian directors went there to see with their own eyes how the Bolivarian revolution ideals were being implemented. They were disappointed but kept a cool balance throughout the making of this film. They went to the roughest neighborhoods of Caracas as well as with the richest elites. They went to see how the much boasted national health policy is implemented in the hospitals. They went to see what is available in the market for normal people. They spoke with immigrants, students and journalists. They also spent a whole day traveling around the country with Chavez himself, asking questions and thus allowing the viewer a chance to come to independent conclusions on the pros and cons of his rule.

Here is a trailer of the documentary in English.

You can buy the DVD here, in original Spanish with English subtitles.


The Cooperative Suttvuess based in Rome has been working in the field of research, audiovisual production and post-production since 2000. It was born as a post-production company for cinema and television. Over the years however, the cooperative has enlarged its field to the production of historical and inventive documentaries as well as commercial and social advertisements.
INFO: www.suttvuess.com

Or go to La Minaccia's blog. 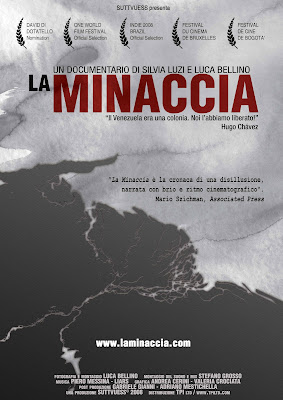 Great concerto today at Pagine del Mondo. Bea is a young, dynamic independent Italian lady who left the safety of a comfortable home to see and live the world. Now in Brussels, she is at home in many countries and speaks many languages. In her spare time she pairs up with Mariano, a professional piano player from Spain, and they put together a multilingual show of songs from aroung the world. We were  honored to host them for a night at our travel club.