River Isla near Castle, this is what we learn from a local signpost: According to the legend, two giants, a husband and a wife lived in this area. The husband Cally Camb was believed to be one of the last descendants of the giant Fingal best known for building Fingal's cave in the Giant's Causeway.
Colly Camb Lived in a cave among the boulders on the slopes of mound Blair. Because of his habit of throwing stones from the top of the hill, He was feared by local people.
On one occasion, for some reason, he flew into a rage with the inhabitants of West Mill and hurled a massive bolder after Homestead intending to demolish it.
Considering the size of the stone and the distance it was thrown it was a good shot, but fortunately, he missed. You can still see the Gled Stone where it landed by the road further down the Glenn.

We are at Glenisla, which means the valley of the river isla. 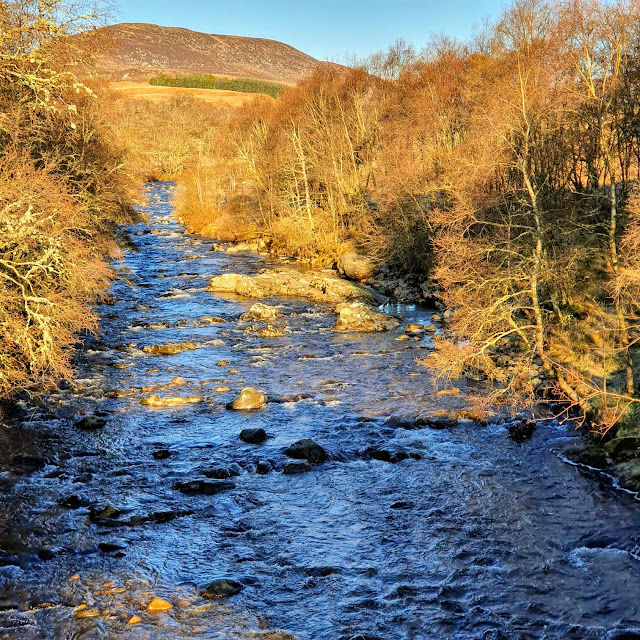 Our guide today is John, a retired politician who was also a Town Councillor for 22 years. Maybe 75 years old, designed path for walking trail around the area. he is a sociable man, who makes it a point to stress to us, as if we would be responsible for this, that he wants to be cremated and ashes dispersed from the highest point of the trail.

No animals today though yesterday we saw deer. Hunters are allowed to shoot deer, grouse, to keep their population under control.

We walk by a private cottage by the waterfront. It is securely locked up with no one home. John says it must have been there a long time, it would not get a permit today!

Walk 6.1 km in three hours. The whole Cateran Trail would be 64miles (103km) along a circular route. It can be waled in 4 to 5 days and accommodation with a hot bath and a dram of whisky is available every 12 miles or so. Maybe next time?

Cold below zero but crisp sunny day, actually feel warm after some walking to peel off layers of clothing.

Evening at home in Forter Castle with two Scottish musicians, they play the guitar and harmonica and teach us how to dance folk music.
No comments:

Bits and pieces from our visit to Stirling Castle in Scotland.
Lucky to get (like every day!) forward seats in our bus. They are reserved for disabled tourists but there are never any and we board last so they are available! Pleasant ride to Greenock, the name means "sunny place" Forty-five thousand people, the economy developed on sugar from the Caribbean. This thanks to the 1707 union treaty, grow by trading with British colonies in America avoid French and Spanish pirates further south.
James Watt from here Britain's oldest dry docks, now build submarine for Australia. Only 2.5% of the people now speak Gaelic.  Scotland issues its own own banknote GBP but sometimes it is not accepted abroad
We hear a story about the local kelpie, a horse/human figure that haunts the lakes of Scotland...
In the evening chat with Axel, our waiter from the Philippines. She's been on this ship for 2 years, before that 9 years on Queen Mary 2, that was her home. Once she had a serious problem with one eye lost sight. Cunard paid all treatment for two years during which he could not work. then took her back on Queen Victoria.