this English review was originally published in Survival, Vol XXIX, No 4, July/August 1987. 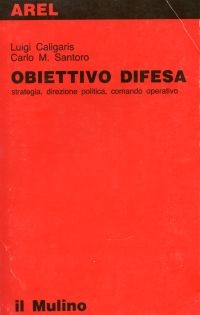 In the last few years, the international economic and political stature of Italy has increased. One domestic repercussion of this has been a generalized concern about security policy. This renewed interest in security has revitalized a dormant debate along different currents of thought which have long characterized Italian defense thinking. At the risk of oversimplifying, three currents of thought can be identified. At one end of the spectrum there are the nationalists, who want Italy to assume an independent role above and beyond its Alliance commitments In the middle is a group, the "mediators", who want Italy to remain closely aligned with its Western partners, while simultaneously assuming a high diplomatic profile world-wide. At the other end one finds the "integrationists", who stake everything on European and Atlantic cohesion The work of Santoro and Caligaris falls somewhere between the first two groups.

While presented as a cooperative effort, the book is divided into three quide distinct and separately authored parts. The first part, written by Santoro, addresses the broad issue of the geopolitical context of Italy. What transpires here is the desire for both a greater national assertiveness at the regional lever - mainly in the Mediterranean - and a more active involvement in Alliance security and foreign policies at the global level. Santoro sees the world as fundamentally bipolar (p.14), but the implications he draws from that bipolarity are not wholly clear. On the one hand, he believes that should a medium power choose "not to belong to one of the two blocs ... instead of gaining in terms of independence it would see its task become more difficult", because its operating area would remain under the control of one or the other of superpower. He cites India and Yugoslavia as two such medium powers (p.15).

On the other hand, he recognizes that for a medium power the coordination of national interests and alliance obligations can often be problematic, and cites the crises of Suez in 1956, Cyprus in 1974 and Libya in 1986 as examples (p.29).

The implications for Italy are ambiguous: should it attach itself more tightly to NATO, in order to safeguard its freedom within world bipolarism, or should it disregard NATO whenever its national interests conflict with American ones? It does not seem possible to do both, as Santoro seems to wish. Also, it would have been helpful if he had explained why Indian or Yugoslavian foreign polity might have been more "independent" had those countries belonged to one of the two blocs; or how the medium powers involved in the afore-mentioned crises might have been at an advantage had they disregarded their respective blocs.

Santoro points to a possible answer when he writes that Italy should pursue national interests at the regional level in the Mediterranean area while framing its global interests within NATO (p.106). This however poses another set of unanswered questions. First, Italian national interests in a region may be global interests for one or both of the supposedly omnipresent superpowers, thus restricting its room for manoeuvre. Santoro does write that Italy needs a "more manoeuvrable and flexible tactical room for manoeuvre" (p.32) but the meaning of that phrase remains rather enigmatic to this reviewer.

Second, he states the need for Italy to develop a "package of national strategic objectives" which should "stress its natural role as a thermoregulator of the Mediterranean" (p.48). Again, it would have been interesting to read what he has in mind when he speaks of such objectives, and how Italy could impose them upon the Alliance and US, even if only at the regional level.

Finally, some elaboration would have been welcome as to why, in order to perform its thermoregulating function, Italy could "no longer maintain a low-profile political and military position" (p.42).

The difficulty of defining, before pursuing, national security interests is clearly recognized by Gen. Caligaris in the second part of the book, devoted to an analysis of the problems facing the italian political leadership. But, he points out, this is only one of the challenges facing the Italian leadership. Others include improving a highly deficient defense legislation (it is unclear, for instance, who would hold the High Command in case of war (p.202); creating an environment - for example, in the universities - where a security culture might flourish (p.205); refurbishing the now rather inadequately structured decision-making apparatus, both for day-to-day and for crisis-management purposes; restoring the position of Chief of Defense Staff above the service chiefs (p.287).

Unless these problems are satisfactorily solved, so the main thrust of Caligaris' argument implies, Italy will remain confined to its parochial dimension, wherein it is constantly seeking not to be excluded from international bodies and meetings - especially those restricted to the major industrialized countries - quite irrespective of what it can "say, deny or offer" as its own contributions (p.190).

The last part of the book, also by Caligaris, addresses specifically the issue of the military instrument, seen as an "extremely critical aspect of a national security policy" (p.243). Throughout this part he points to the dual function of force for both the "successful resolution of otherwise unresolvable crises" (war fighting) and the "catalization of effectively mediated solutions" (deterrence) (p.243).

Caligaris, however, betrays an overall uneasiness with the fact that, because of deterrence, military strategy has acquired an "unusual dimension" to the point of having both "lost its identity" (p.249), and weakened the military's commitment to force preparation. Moreover, nuclear deterrence in NATO has brought along a "deresponsibilization" and a "denationalization" of defense, as many countries, including Italy, found it easier to passively accept American protection (p.250).

With Caligaris' concluding chapter the book comes full circle. The main theme that emerges throughout is the perception on the part of the authors that Italy is not playing a role in the management of international security - particularly at the regional level - that is commensurate with its rising international profile, and that this role should increase. On this score, most Italians concerned will agree.

However, he means through which to achieve this end are more varied than the book would lead one to believe. Gen Caligaris does highlight several areas where Italy's defense posture is wanting, and his work is a useful contribution in the rather desolate panorama of Italian security literature. However, the book fails to provide clear prescriptions in terms of security policy objectives. It also does not convince that a higher military - and particularly nuclear (p.160) - profile is needed for Italy to be able to provide a better contribution to international security.