A document of war and strife during the 1990s, this volume of photographs by the photojournalist James Nachtwey includes dramatic and shocking images of human suffering in Rwanda, Somalia, Romania, Bosnia, Chechnya and India, a well as photographs of the conflict in Kosovo. An essay by the author Luc Sante is included. The book is published to coincide with an exhibition of Nachtwey's work at the International Centre of Photography, New York.

This book is a masterpiece of what I would call "political" photography. Nachtwey is a traveler, big time. He goes to war, or follows war's footsteps, and closes in on his subjects where most others would turn away. He prevails over his own emotions in order to show us the horrors of the world. He feels he has to do it, as he explains in interviews (see DVD below) because if he does not, who will? He is humble, understated and brilliant. The book contains only B&W pictures, is big and heavy and expensive, and it is probably the best photo reportage book you will ever buy. It certainly is for me.


You might want to buy this Oscar nominated DVD, made by Swiss director Christian Frei, who followed Jim Nachtwey and placed a micro cam on his film camera. He is also extensively interviewed and so are many who work with him. I have reviewed this DVD here on this blog. 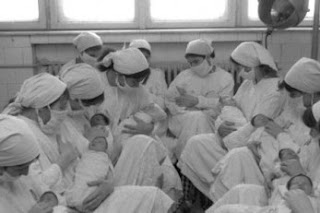 
You can watch a trailer of the movie here, and the introduction here.
No comments: