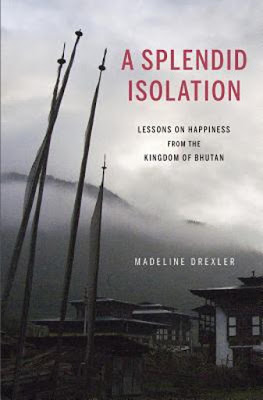 What does Bhutan understand about happiness that the rest of the world does not? Award-winning journalist and author Madeline Drexler recently traveled to this Himalayan nation to discover how the audacious policy known as Gross National Happiness plays out in a fast-changing society where Buddhism is deeply rooted--but where the temptations and collateral damage of materialism are rising.
Her reported essay blends lyrical travelogue, cultural history, personal insights, and provocative conversations with top policymakers, activists, bloggers, writers, artists, scholars, religious leaders, students, and ordinary citizens in many walks of life. This book is sure to fascinate readers interested in travel, Buddhism, progressive politics, and especially the study and practice of happiness. A Splendid Isolation was a Finalist in the 2015 Next Generation Indie Book Awards.

A well-informed travelogue on Bhutan by someone who knows the country well. The only slight shortcoming is that she is too much in love with Bhutan and this results in a positive bias when she hands out her opinions.
A small book of only 60 pages, it is packed with information, some current and some of historical interest. The first paved road was built only in 1962. Until 1974 no foreign visitors were allowed and that year only 287 visas were issued (in 2012 the total topped 100,000). There was no TV until 1999, the same year, oddly, that Bhutan was connected to the internet. They did install a grand total of 1 traffic light in Thimphu in 1992 or os but then removed it as it looked out of context. (I have still seen a policeman on the spot, directing traffic, in 2016.) And so on...
All throughout the book, the author delves on the issue of Gross National Happiness, the trademark policy of Bhutan, highlighting its successes and also its shortcomings and contradictions.
No comments: