In the middle of the night my wife woke up with food poisoning, it looks like the green long beans at the buffet maybe were not well cooked or washed. Palau produces virtually no vegetables, they are all imported from the US. I suppose it might be easier to import them from Asia or Australia, but give the special relationship I am not surprised a lot of food comes from American farming. Even eggs I am told!

We hate having to wake up our cruise director but she is feeling really sick, even coughing blood.

Luckily our boat is not far from the port, and the skiff ride to shore in the moonless night takes only a few minutes.

The hospital is a simple structure but seems alright. I register her with a receptionist and get checked by a nurse before seeing a doctor: a young petite lady who wears a white mask and gloves. She sends us to an adjacent lab for a blood test.

As I walk in the door there is no one to be seen but, after a few minutes, a really big betel-chewing guy with red gums shows up in a blue hospital apron and takes a sample of her blood. After some 20 minutes, we get the results. The soft-spoken doctor says not to worry it's not too serious and blood is just coming from her scraping her throat with the repeated vomiting.

On checking out, I'm pleasantly surprised to see a sign on the cashier's window that they accept my DAN (Diver Alert Network) insurance for their services. Except that they don't. When they see our cards they argue our policy does not include this eventuality. Insurance companies never cease to surprise. It's going to be 151 dollars for us. Could have been worse.

A poster on the wall encourages women to report domestic violence. It informs us that 37 percent of the victims in Palau don't ever tell anyone while 67 percent don't report it to the authorities.

Another poster explains ABC: babies must sleep Alone, on their Back and in a Crib. And without a pillow, but somehow the P didn't make it into the acronym. And by the way, no toys in the crib ...

Another poster warns about dengue fever: report asap any symptoms. I thought Palau was free of dengue but apparently it comes back from time to time.

On a happier note... an open box on the wall is full of condoms and a little colorful note taped to it encourages patients, or anyone passing along really, to take a free condom, "or 2 or 3..."

Email ThisBlogThis!Share to TwitterShare to FacebookShare to Pinterest
Tags (click on a tag to read posts on same topic): health, Palau, TRAVEL

Palau is one of the fewer and fewer countries that still recognize Taiwan as the legitimate government of China, much to the chagrin of Beijing. And this despite the fact that Chinese tourists now provide a large amount of business.

This is because, despite the above-mentioned policy, Chinese nationals can travel to Palau visa-free, which of course makes it a very attractive destination for a tropical vacation.

China recently tried to make the point that enough is enough, and made it more difficult for tour operators to organize trips to Palau. But there are still quite a few who do come, so much so that there are a number of Chinese restaurants in Koror which cater mostly to them.

Some of these Chinese settle in Palau, some try and become naturalized citizens. For one, foreigners can't buy land or businesses alone, they can only be only co-owners with a local Palauan partner.

Another reason is that a Palau passport is one of the most coveted ones in the region, as its proud owners can travel visa-free in 118 countries around the world, including the USA. Though a far cry from Japan's 190 visa-free destinations, it is much better than most. Chinese nationals can go to 74 countries visa-free. Taiwanese can travel to 148 countries, exactly twice as many.

I should be quite happy with Italy's 188 destinations, which puts my country at the n.5 spot in the world, after Japan with 191, Germany with 190, Singapore and South Korea with 189.

Email ThisBlogThis!Share to TwitterShare to FacebookShare to Pinterest
Tags (click on a tag to read posts on same topic): China, Palau, Taiwan, TRAVEL 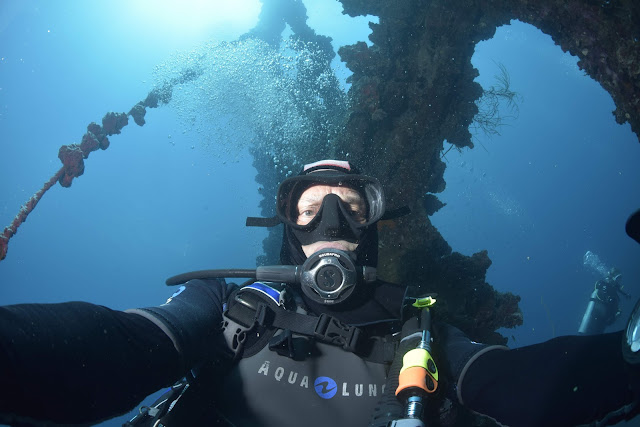 The "Iro" was not a "maru", like most wrecks in the Chuuk lagoon, ie it was not a merchant transport converted to military uses. It was an oil tanker built in 1921-22 expressly for the imperial Japanese navy. Funny she was powered by coal, was a steamer, even though she carried oil for the engines of other ships. One of only 9 oilers in the Japanese navy in WWII, a major weakness.

It participated in most major WWII operations, except Pearl Harbor. During the course of the war, it was hit many times but survived.

It was finally hit by a torpedo in her bow near the Philippines which chopped off a whole bite of the hull at the very front edge. In March 1944 it was limping on her way to Chuuk to be repaired when she learned of operation Desecrate, the American attack on Palau, and she was ordered to Palau, the next maritime line of defense for the imperial navy. 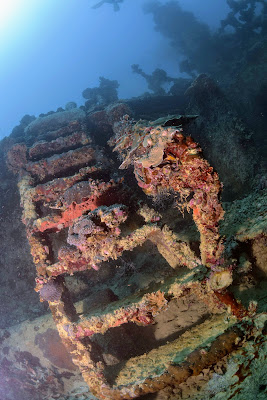 There she was again attacked and finally sunk.

It was salvaged in the 1950s, the Japanese recuperated the bodies and valuable metals but... the boat bringing the remains of the Iro's sailors and any valuables back to Japan sink en route!

The Iro now rests upright, stern sank first and is deep under the sand with prop and rudder clearly visible. A most interesting set of dives. 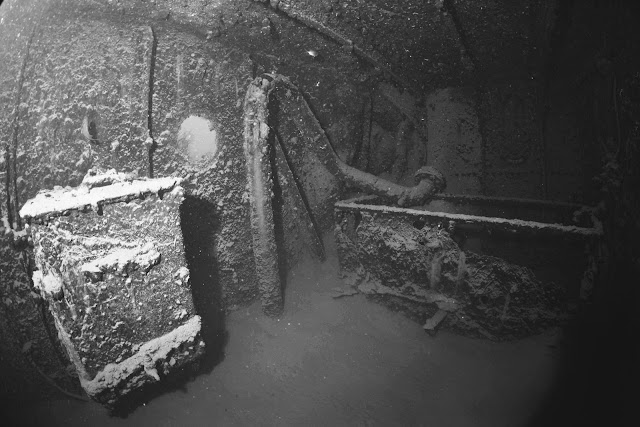 Leisurely break between dives, a tour in a canoe in the lagoon.
No comments:

Email ThisBlogThis!Share to TwitterShare to FacebookShare to Pinterest
Tags (click on a tag to read posts on same topic): Palau, sport

Mrs Wan, who runs some restaurants and hotels in Palau, came over from Guangzhou some fifteen years ago with her husband. She speaks Cantonese and Mandarin but only basic English. Their kids grew up here in Palau and speak good English.

She takes a liking to us since we keep coming back every day for dinner and comes over to chat. We come back because the food is excellent, the price is fairly low and they come and pick us up from our hotel for free. And take us back after our meal. Oh, and because my wife is Chinese and there are no Italian restaurants in Koror. None that could be called that really. And not many good restaurants, period. Lots of hamburgers and junk food I am sorry to say.

Mrs Wang also gave us free food a couple of times: a delicious crab one day and fresh yellow fin tuna just caught by her cousin another evening.

She says business is slow these days because the numbers of Chinese tourists are down. In fact during a whole week we've only seen very few patrons in the restaurant, all of them Chinese, which is surprising since there are quite a few western tourists around. I guess they prefer hot dogs and hamburgers. Oh well.

The biggest table in the restaurant, a big one with a lazy Susan in the middle, is always that of Mrs Wan's family and their visiting friends!

She came to talk to us a few times. She says fewer Chinese come to Palau these days despite the allure of a not too far sunny tropical destination accessible visa-free, an unusual combination of attractive factors for the rising middle class of China. The reason, she explained, is that Palau recognizes the government of Taipei as the legitimate government of China, and not that in Beijing.

So Beijing has forbidden Chinese travel agencies to sell group tours to the country. Since most Chinese still prefer group organized travels this has had a major impact.

Tom, an American dive guide who has lived here for decades, would later explain to us that another reason for fewer Chinese is that Palau's government has withdrawn the license it had given to Chinese charter flights. The reason is that too many Chinese were flying over but not spending much money. They would stick to their tour operator's activities, eat at Chinese restaurants, even bring their own food from China. Tom said the Palau government would rather do without them and try to attract bigger spenders like Americans, Japanese, and Koreans as well as the relatively few European divers who make it all the way down here.

These days they are opening a new Chinese resort, Palau Royal Garden. Some fear Chinese intrusion into Palau, some politicians think they will use investment as a political tool. That is not inconceivable I suppose though people like Mrs. Wang are just hard-working entrepreneurs who go and find opportunity where they can find it in the world, just like the Chinese have always done.

Very American breakfast with lots of fruit juices though they are mostly from concentrate. Disappointing in a tropical island. Lots of processed foods actually, mostly imported from the US and Taiwan, even eggs!

We are picked up at our hotel by Marete, a stereotypical tall, blond, blue-eyed Danish lady who is spending a gap year traveling and working around the world with her boyfriend before going back to Denmark and continue her studies. Great idea. Not many Italians do this, even fewer Chinese I think. Too many Italians stay home with mamma until they move in with their wives. Anything to avoid cooking or having to manage a household.

Chinese are just beginning to understand the concept of a gap year. Until now they have to work as soon as possible to support the family. But the rising middle class now knows that is an option and can afford it, we'll see. 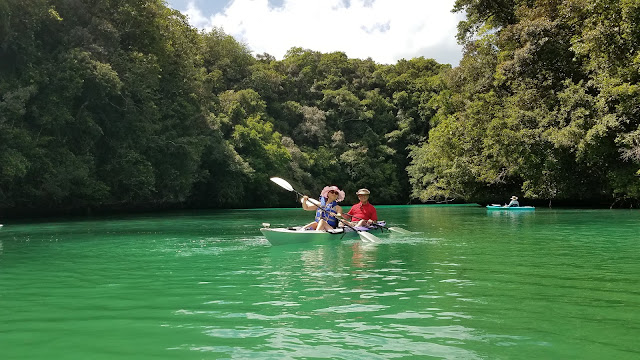 Amazing canoe tour at Risong. A small group of us with a guide who comes from Tinian but has worked here for 12 years: meny more tourists, more money to be made. He takes us through the unmistakable Palauan volcanic formations carpeted with luscious green bushes whose branches overloaded with deep dark leaves reach all the way to the waterline.

An American pilot is with us with his Japanese girlfriends (panta rei, a few decades ago she would have rather died than be anywhere near him). he works for United Airlines is enjoying a day off before returning to Guam, US aviation and military hub in the region. We join a group of 4 elderly and very energetic American ladies. one asks where we live, and when I say London but not sure after Brexit she invites me to move to her native New York city. 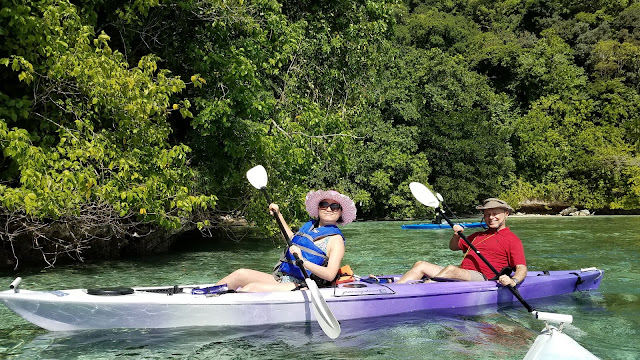 We can see small fish of all shapes and colors, a few baby reef sharks and lots of totally innocuous jelly fish, which do not sting as they have no predators in these protected waters.

Dinner at the Yue Hai restaurant, owned by Cantonese family who moved here some two decades ago also run the hotel's jewelry shop all in the family, including some cousins who have come here for a few years to help and make some dollars. The restaurant is far more appealing and much better value than the jewellery store. 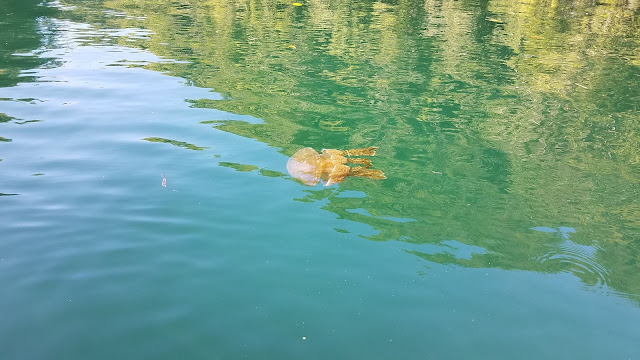