As we disembark we see piles of coal at the harbor, they tell us it is still extensively used for home heating! We have a guide who is obviously a Catholic nationalist, here is a few points from his explanations during the day.

Now Northern Ireland is trying to revive the shipbuilding industry concentrating on repairs, 800 workers, used to have more than 25000. The Titanic, of course, was built here. Biggest exports from Northern Ireland are farm products, lamb cheese, and machinery.

Giant causeway, since 1996 UNESCO World Heritage Site, the only one in NI. It was formed 50 million years ago by volcanic eruptions and is made up of about 40,000 stones.
According to mythology a giant from Scotland and one from Ireland were fighting. The Scottish giant bigger Irish ran back and wife.

1588 shipwrecks of Armada, uncharted waters on West coast of Ireland

Why the UK keep North Ireland after Irish independence in 1922:
- strategic reason: feel vulnerable to attack from Atlantic
- economic: 6 counties in ni richest, textile shipbuilding. At partition Northern Ireland had 80% of the island's gdp, today 9%.
- just over 50% in Ulster wanted to remain in the UK.

Unionists wanted NI to be a "protestant priority" land. In the late 1960s lots of catholic uprising, they were inspired by the American Civil rights movement, discrimination against Catholics similar to that against blacks in the USA
even segregation, created enclaves, separated by so-called peace walls still visible.

The army was sent in. In 1971 cases of internment of Catholics without trial
powers to army directed against Catholics, up to 5 years in jail without charge.

In many ways a backward country, everyone got the right to vote in local elections 1973, before that one had to be a  landowner!
No comments:


Stop at the Giant's Causeway, Northern Ireland's only Unesco WHS. Rainy day but fun to see this unusual site and waves crashing on the shore!
No comments:

Biggest hand-operated loom in the world made with Canadian pine wood. The lady said she can do 1000 knots per hour!

These carpets are in Irish embassies around the world and other major public places.

At a local pub, some musicians and crew singers from our ship fraternize.

The town sports a small "cathedral" and lots of fishing boats. A quiet walk under the warm drizzle.

Email ThisBlogThis!Share to TwitterShare to FacebookShare to Pinterest
Tags (click on a tag to read posts on same topic): cruise, Ireland, VIDEO, work

What better way to spend a rainy day in Dublin than in the whisky museum?

Notes from a guided tour.

Uisce is the Irish word for water
beatha means of life

book of Kel 1405 first record of the word whiskey, it was then made by monks.

Was the original purpose communion, instead of wine?

Used as perfume, originally from Iran came with with moors to Spain

must be aged at least 3 years by law

Angel share lost to evaporation is about 20% per year, therefore old whiskey expensive: you pay for lost whiskey!

the more you lose to angels the faster whiskey ages

Stop the process by drying with hot air or burning peat to make smoky flavor get grist.

Yeast to transform grist to alcohol, about 12pc beer is the result

Whiskey is distilled beer in a nutshell

In Ireland cìit is allowed to make whiskey at home but not sell or even give away because fear of methanol.

... and also because of tax revenues suffered!

There 8192 illegal stills in Ireland in 1834 , more than ten times more than in Scotland

Stills made of copper

Add sulfites as in wine to stabilize

Toasting barrels just 20 seconds or so to get flavor caramel and vanilla from America oak barrels, only use barrels once.

Learned to blend now 18 stills up from only 2 before they turned to continuous, more to open soon

no spitting in whisky tasting! must get ending with swallowing
can dilute however, only reason to swirl is to look fancy! no use...

2. powers gold label
malted and raw barley together
started because maltée barley was taxed more traditional
aged in bourbon barrels only
round long

Just next  to the whiskey museum is the famous Peterson pipe shop, I cannot not go in, and after a good chat with the salespeople who give me a good discount I end up buying two pipes to add to my collection.

End the day with a walk around town looking at some typical architecture.

Took some time to get ashore as they had to check Lifang's passport. As a UK resident and married to an EU national she does not need, and does not have, a Schengen visa, which the cruise staff should know... So we had to wait for a chubby Irish official to board the ship and check the documents of all non-EU passengers and she, of course, smiled and said all is OK and we can go ashore... 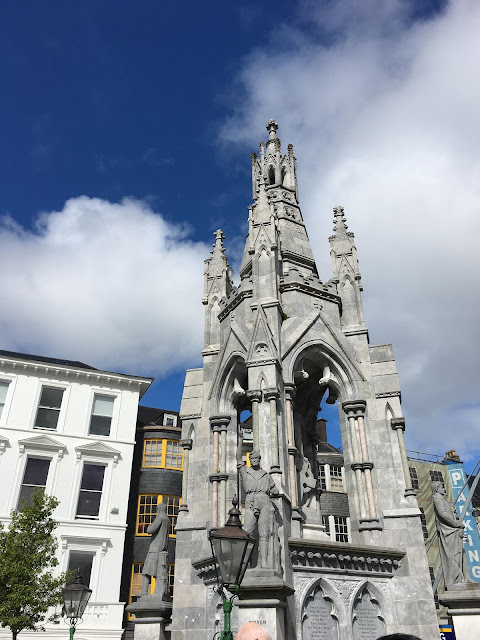 Cork is the 2nd largest natural harbor in the world after Sydney, it has a huge 5m tide which requires skill to operate in. The river is navigable 12 miles up to the city of Cork. It was a poor town for a long time, lots of emigrants going from here to the USA.

Now it is doing very well. Ford established its first factory outside the USA here, but now it is Apple Computers which is the largest employer.

Interesting fish at a local market!