The Storyboards of Palau

While in Micronesia and Palau I bought some woodcarvings. The most important among them is a Palauan storyboard. These are high quality works of art made by local artists on hard wood, and their subjects are local legends, more legends are here.

The storyboard I bought tells the legend of Osile Ra Ulong, which I report below as taken from the National Palau Museum website.
Osilek was the chief of Ulong. Very wealthy, he was known to have the biggest fish net in all of Palau. People envied him for his fast canoes, his many servants, and his wealth. Every mother wanted him for a son-in-law. One day, he fell in love with a beautiful young lady named Oreng, but she was already in love with young Ngiramariar, a poor fellow from her village. As traditions dictated that marriages were to be arranged, Oreng was forced to marry Osilek when he proposed. Her mother said, "Oreng, don't you want to marry rich Osilek and give your family a happier life?" So Oreng did as her mother decided. However, poor Ngiramariar was heartbroken when he became aware of the situation.

Oreng went to live with her new husband on his island. One day, a sad and lonely Oreng went on a walk around the beaches of the island, then saw a coconut cup with oil floating toward her. This was a sign that her sweetheart was either sick or dead, and she immediately started plans to get back to her village and see Ngiramariar. She told her husband that she wanted to go to visit her parents and her husband approved.

On her arrival, she heard that Ngiramariar was dead so she went straight to the house where the funeral was held. She asked the family if she could see Ngiramariar under his death blanket to say her farewells and present him with her gifts. Permission was granted, but as she took a long time to do so, the family asked someone to check Oreng. They found her embracing Ngiramariar, but she was already dead.

A messenger was immediately dispatched to Osilek with the sad news. Osilek was sitting on his cliff lookout point and saw the canoe coming in a hurry. He immediately knew that his beloved Oreng was dead. He cursed and stomped his feet so hard that he lost his balance and fell into the sea and turned to stone. People still say that this particular stone can still be seen on a visit to the island.
Posted by Marco Carnovale No comments:

Email ThisBlogThis!Share to TwitterShare to FacebookShare to Pinterest
Location: Palau

I did this dive alone with my guide Johnny, a local Chuukese who knows this wreck like the back of his hand. He takes me around the dark, silty bowels of the ship with unfailing dexterity. We visited the engine room, where all kinds of tools are still neatly hanging on their racks. The radio room is in great shape, the big apparatus still on its feet. Lots of plates and bowls lying around.

Buy this book on Operation Hailstone, the attack by American navy on Chuuk in February 1944. 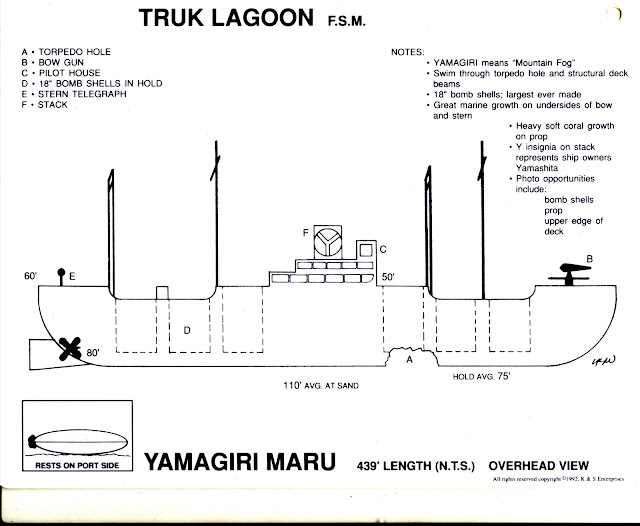 You can watch a video by Andrew Lee here 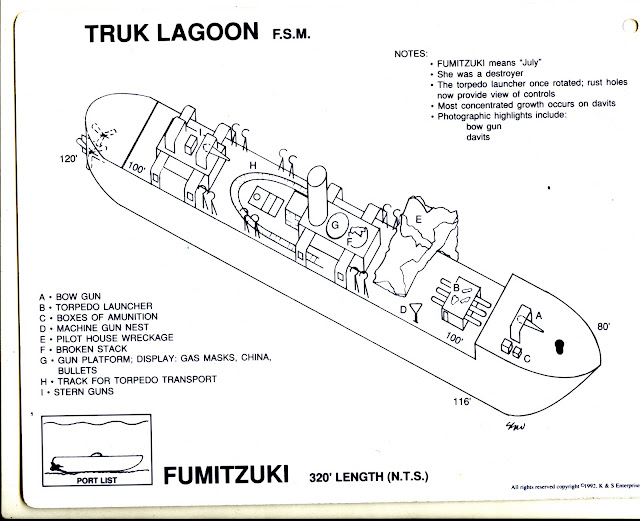 Dive on the cruiser Fumizuki.

The Fumitsuki was a Mutsuki Class Destroyer built in 1926, 320ft/97m long with a gross tonnage of 1,913 tons normal, and 1,590 tons light after reconstruction. She was driven by 2-shaft Parsons geared turbines and 4 Kampon boilers. She could carry a complement of 150 officers and crew. She was one of only two real Japanese Navy combat ships sunk in Truk Lagoon.

She was capable of over 33.5 knots fully loaded, but was under repair at the time of her demise. The name translates as “the 7th month of the moon calendar when rice/flowers ripen.” Information from Trukwreckdiving.com

I can see the railway used to move equipment of the bridge and torpedo launchers.

Military transport ship built in Newcastle in 1905 and sold to a Japanese shipping company in 1921. Requisitioned by Imperial Japanese Navy for the war. 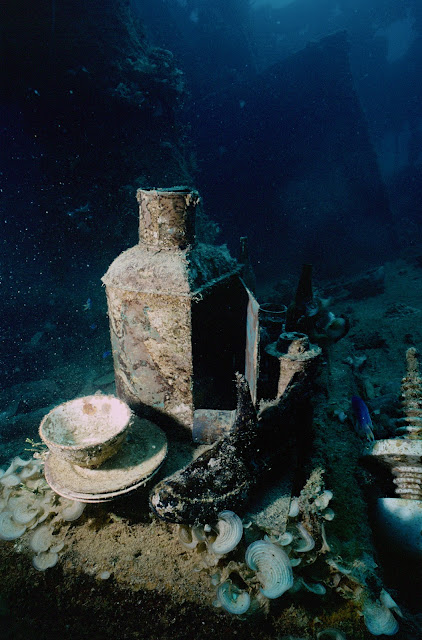 See this video by Rod MacDonald on the Unkai Maru 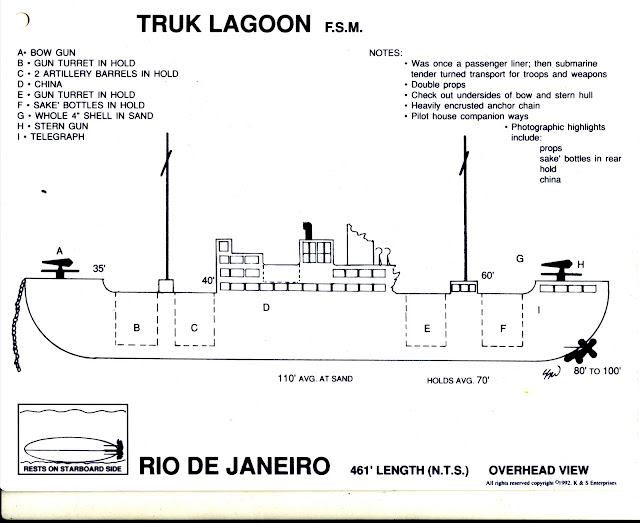 Interesting dive on the Rio de Janeiro Maru where I can photograph the hugh props and tons of bottles of sake.

Stay tuned for more pics as I scan them...
Posted by Marco Carnovale No comments: 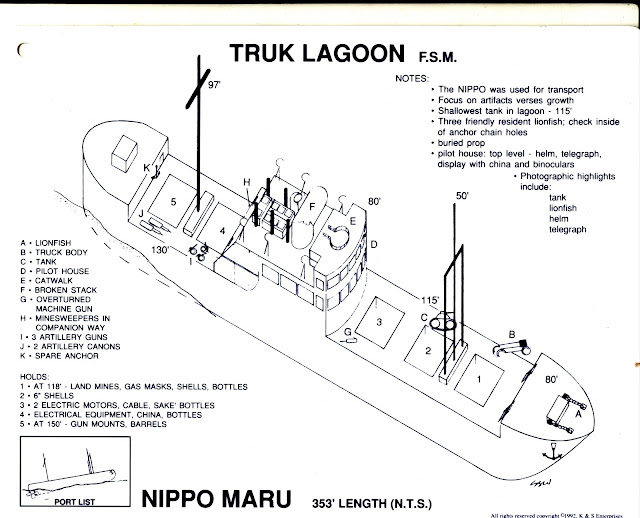 Three memorable dives. I could see lots of artillery pieces by the stern, a tank by the bow, and the beautifully preserved pilothouse

In this wreck of transport ship Sankisan I could see and photograph tons of truck tires, mountains of bullets and lots of airplane engines.

My pictures are being scanned... to be included soon!
Posted by Marco Carnovale No comments:

Largest divable wreck in Truk. It was an oiler. 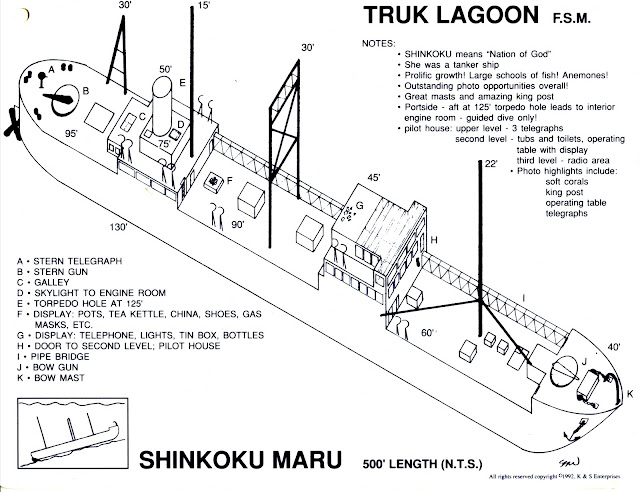 The Shinkoku Maru is a fascinating dive. I found most interesting my visit to the galley.

Also of significance is the operating room, with the bed still almost intact.

You can watch two interesting videos on the Shinkoku here on Vimeo (see especially those by Pete Peterson) and here on Youtube . 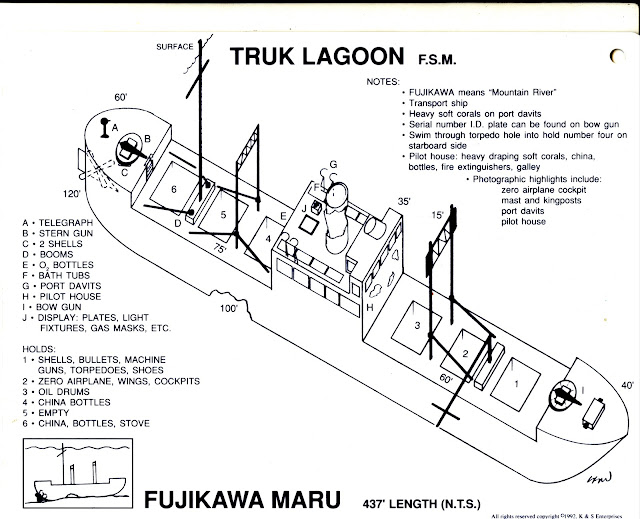 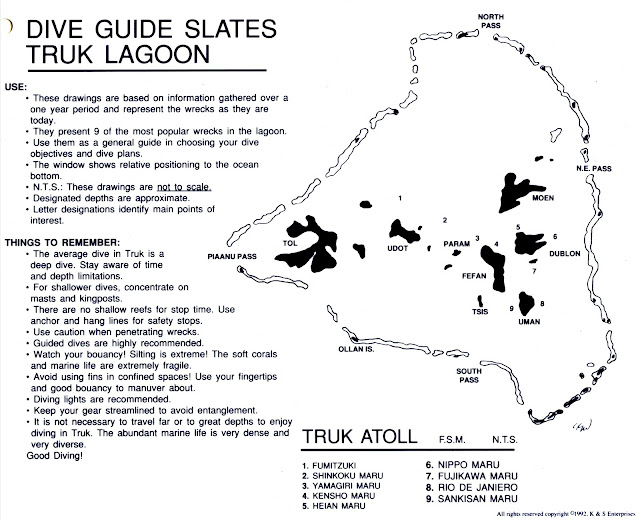 Today I arrive in Chuuk (formerly known as Truk) Lagoon for ted days of diving aboard the Truk Aggressor yacht. In the map above you can see the location of the wrecks I will be visiting. I am adding photos and commentary as I complete my research and scan my slides (in 2013)... stay tuned!
Posted by Marco Carnovale No comments: