Ishaa Ishaan is an 8 year old whose world is filled with wonders that no one else seems to appreciate; colors, fish, dogs, and kites are just not important in the world of adults, who are much more interested in things like homework, grades and neatness. Ishaan just cannot seem to get anything right in class. When he gets into far more trouble than his parents can handle, he is packed off to a boarding school to be disciplined.

Things are no different at his new school, and Ishaan has to contend with the added trauma of separation from his family. A new art teacher infects the students with joy and optimism and breaks all the rules of how things are done by asking them to think, dream and imagine. All the children respond with enthusiasm except Ishaan. The teacher soon realizes that Ishaan is unhappy and sets out to discover why. With time, patience and care, he ultimately helps Ishaan find himself.

Bonus features (in Hindi only, no subtitles) include: Director's Commentary, panel discussion on children, deleted scenes, making of, Music CD with two beautiful collectible postcards. This film is Aamir Khan's debut in directing.

In this film we see a story of commitment and hope against all odds. The film takes place in contemporary upper middle class India, but the moral of the story is one for all places and all times. The subtitle, "Every child is special" tells it all. Yes there are children with special problems, and they do need special attention in special schools. But there are perfectly "normal" children, capable to become integrated in society like everyone else, who simply need to find their own pace and place to do so.

What they all need is love and appreciation, even for quirky "special" inclinations that they may display and that may arouse scepticism and criticism from "normal" people, especially adults. "If you want to win competitions, then breed race horses, don't raise children, dammit!" says Khan, and sums it up well.

In the end, Ishaan comes out on top, while his "normal", super skilled brother, the repository of the family's expectations of success and achievement, does not.

You can see my other reviews of films on India here in this blog.


Click this link to buy more films with Aamir Khan 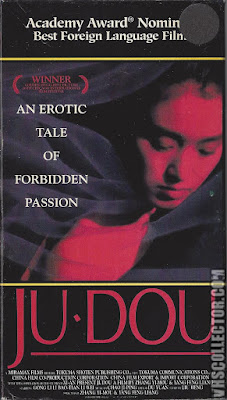 
In Zhang Yimou and Fengliang Yang's sensuous, Oscar-nominated Ju Dou (1990), billowing bolts of red, yellow and blue dyed silk have more freedom than any of the main characters, who are cut off from the possibility of happiness by circumstances and convention.

The trouble starts early, when Tian-qing (Li Baotian) returns from a long road trip and first sets eyes on his new aunt, the beautiful young Ju Dou (Gong Li). Tian-qing's selfish, harsh silk-dyer uncle Jin-shan (Li Wei) - who reluctantly took Tian-qing in after his parents died - has already gone through two wives, and at first his third seems likely to join her predecessors. Jin-shan routinely beats and humiliates Ju Dou at night, berating her for failing to give him a son (he blames her despite his own impotence and sterility).

Tian-qing is drawn to his lovely, sorrowful "aunt," and eventually they begin a torrid affair. But the strict rules and customs of 1920s China make it impossible for them to build a life together, even after Jin-shan becomes paralyzed and Ju Dou gives birth to Tian-qing's son (whom Jin-shan claims as his own). 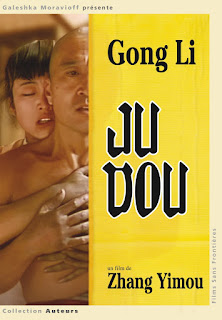 A gripping story about how tradition and cultural context can make it impossible to find happiness. Wealth, prestige, beauty, strength, youth all abound in the big house of the cloth dyer, but no one is happy. And it is unhappiness of their own making. The bad old man has his evident faults, he seems to attract hate like a magnet. The young couple is brave and fight for their rights, at least as we can tell with XXI century eyes. But they also err in taking on a battle against their world (feudal rural China) and impossible odds. 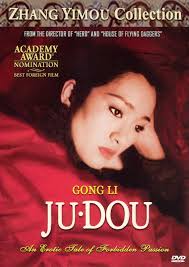 Even the little boy who is born out of wedlock in this cruel environment becomes evil very soon in his life, and after his "official" father drowns in a pool of color dye he can only smile and seems bent on perpetuating his heartless character. He viciously kills his biological father when he realizes they are all the object of gossip in the village.

The final fire that consumes the dye factory is perhaps the only satisfying scene of the film, and I read it as a depiction of the last vestiges of feudalism in China crumbling down with the onslaught of modernity. Very good photography in this film. It is paradoxical that the long rolls of cloth of the dye factory give so much color to a very sad and dark story. The DVD is technically poor, seems a bad digitalization from a film roll, for this I take out one star.

See more reviews of films about China here on this blog. 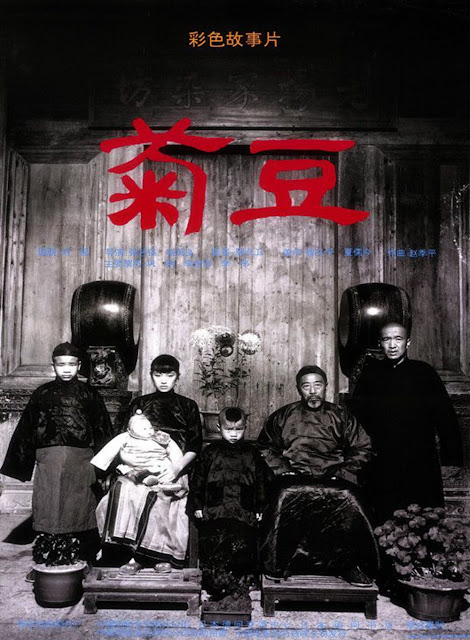