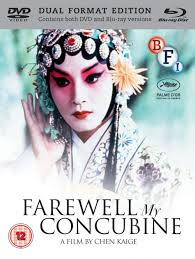 The film gives a most interesting overview of China's history in the XX century through the eyes of Peking opera actors. We see the country moving from the fall of the Qing Empire (the last eunuch is still around for a long time after the advent of the Republic), through the Japanese invasion, the civil war and the various phases of the Communist rule.

Two boys are educated to play two classical roles in the Peking Opera, one masculine and the other effeminate. They are so good at it that they play the opera together for their entire career: during the chaos of China after the fall of the Qing Empire, during the Japanese occupation, the brief Nationalist takeover, the Communist take over, the Cultural Revolution.

Gong Li becomes the wife of the masculine actor, and as such created serious, and ultimately unsolvable, dilemmas in the mind of her husband, with tragic consequences. 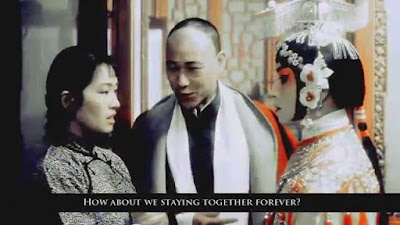 In this film the character Douzi represents in many ways the real life of the actor Leslie Cheung. Douzi was gay and struggled to be accepted in the society of his time, and so was Cheung in real life. He is however successful professionally and admired for that, and so is Cheung, the first Hong Kong actor who acted in a mainland China film. And the real life of Cheung represents Douzi's role in the film: he can't take the pressure any more and ends up committing suicide. Beautiful costumes!

A courageous masterpiece by Chen Kaige, a pillar of Chinese film in the XX century. He addressed the controversial issues of homosexuality and the Cultural Revolution in a film before anyone else dared to do so in the People's Republic of China. For this "farewell my Concubine" was banned shortly after its release in 1993, only to be cleared by the censors a while later in an abridged form.

This was the very first film from the People's Republic of China to win the Palme d'Or at the Cannes Film Festival.

See my other reviews of films about China here on this blog. 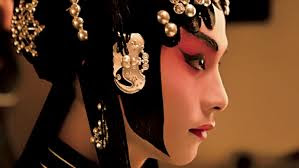 Buy this film by clicking on one of these links