Depart 8.30 am from Port Elizabeth. First stop is at "Seaview", a lunar landscape spot to take pictures of some funny rock formations shaped by wind and waves. Before embarking on the perilous trip on the slippery rocks to take some pictures, I stop to breath in the fresh breeze and have a chat with a few guys who are drinking beer in the shadow of their pick-up truck. They ask about my country of origin and when they hear Italy the first workds that come to their slightly intoxicated minds are ''bella donna: that's all that you need in life". Well one might argue with that, especially if you are a heterosexual woman, or if you are a believer in equal gender rights, but I am not going to. Anyway I like their answer, at least it's not the usual refrain about soccer players and mafia, the references most commonly associated with my Bel Paese when traveling abroad. 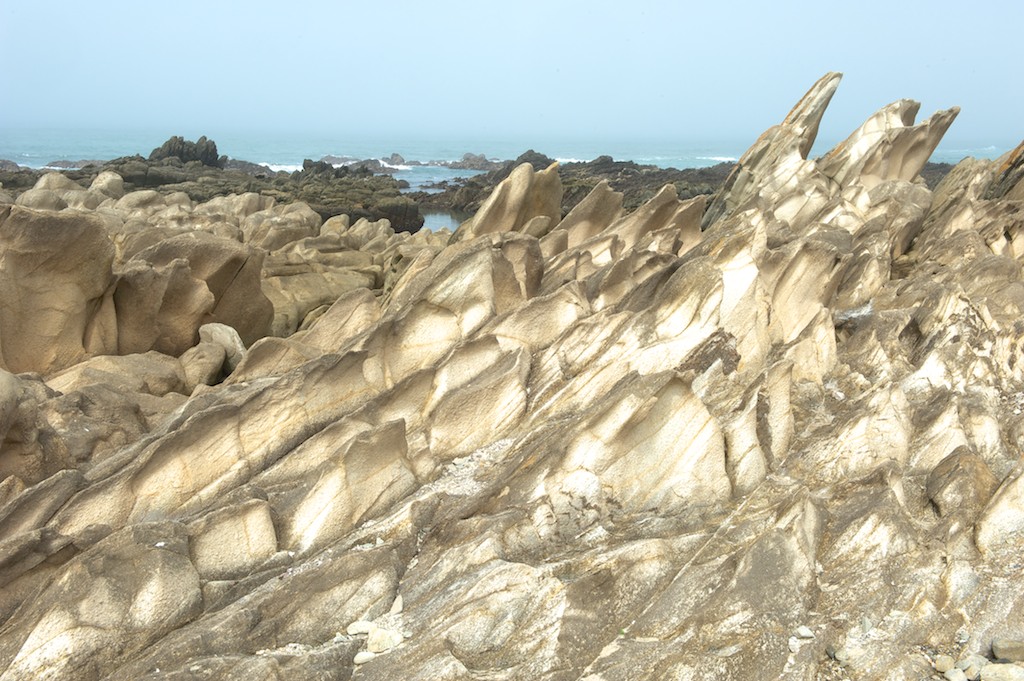 So I agree, a bella donna is really all you need in life. I thought this would be it and we would switch topics, and tackle the weather or Mandela or beer perhaps, but no. One of them asks if I am married to a beautful woman. No, I am not, unfortunately. Do I have kids? So many kids are born out of wedlock in South Africa (some 60%) that, from their point of view, it would be perfectly normal if I did. No, I don't, is again my answer. Why? Well, that's a tough one. So I decide to tell them I actually have a girlfriend who is molto bella but unfortunately she can not be with me for this trip.

After a few minutes I see that Pasquale is coming forward and it is he who now attracts the attention of the three men in the pick-up truck, who let off the pressure on me. I take the chance on the fly, wave them a warm good-bye and head down the rocks to find the perfect seascape angles for my wide-angle lens.

As we keep driving west we stop at Jeffrey bay. It's nothing special really but this could become an interesting twist in my trip because our driver gets lost in a township. I have been trying to visit a township but so far all our (white) drivers have steadfastly refused to venture into any. And today is no different. Petrus wants to get out as fast as possible. Anyway it's drizzling and windy, it would not be so pleasant to walk around, I tell myself. And the light is not right for pictures, either. So be it. At least for now.

However it takes Petrus a good fifteen minutes to find his way out, during which I can take a good look at the place. The people of Jeffrey Bay are obviously poor but not desperate. Their small houses are neatly aligned and seem well maintained. High walls all around most of them prevent me from seeing inside their gardens. No electrified barbed wire though.

In is early afternoon when we reach Tsitsikamma. There would be a lot to do here. I opt for a long walk up and down the steep slopes that are home for abundant wildlife and lush vegetation all the way to the water's edge. It's cloudy, awful light for photography.

Toward the end of my walk there is a suspension bridge, at the head of which a padlock has been securely latched. It bears the name of two lovers. A habit that seems to have spread around the world. 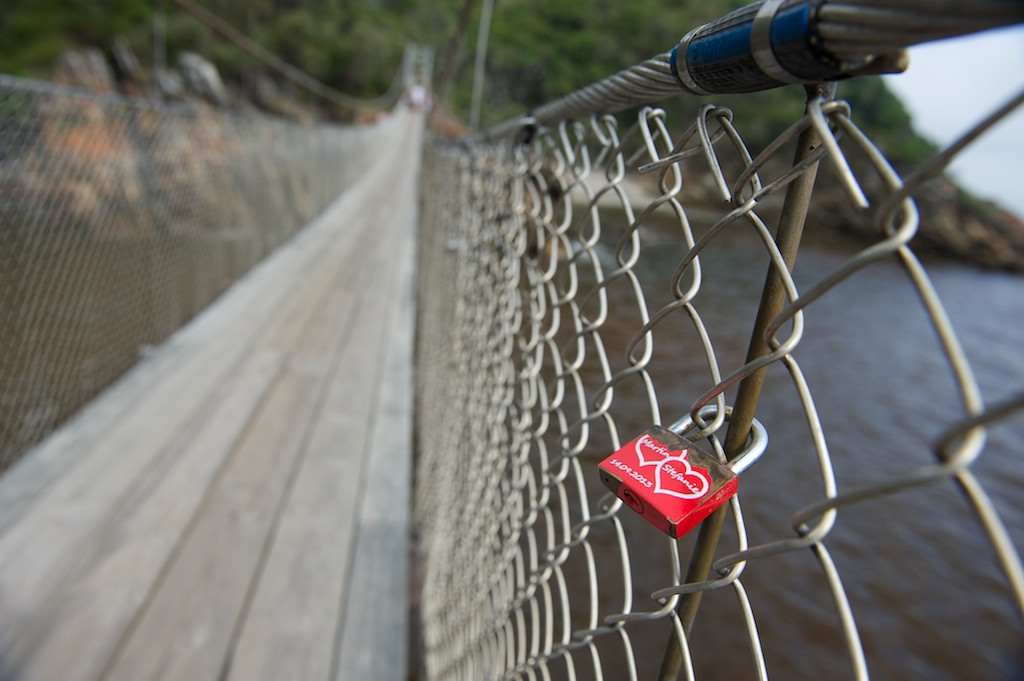 In the evening I can finally satisfy my curiosity for Kudu steak. Hard to come by these days it seems. Last time I had it was in Namibia, over fifteen years ago, and have been missing it ever since. It is hard to get kudu in South Africa, there are not as many of the beasts in the wild and as far as I know they are not farmed. I order it rare. I like all red meat rare, or raw, to do justice to its unique organolectic characteristics. But it nevertheless comes well done. No: way way well done. Taste and send back. I tell them to serve it RAW. After ten minutes they bring me a new steak, nice and juicy, rare. Seems it's common to overcook meat in South Africa. Totally forgettable shiraz.

After dinner I take a short stroll around the hotel and run into a very unique restaurant/bar: there are table outside, and in fact it seems to be fully booked for the evening. But inside the large neon-lit room there are only antique motor vehicles. Motorcycles, mostly, but also one large American car from the 1950s with a sign on the windshield: "You are welcome to lay down on the bonnet if you are female, under forty and naked." 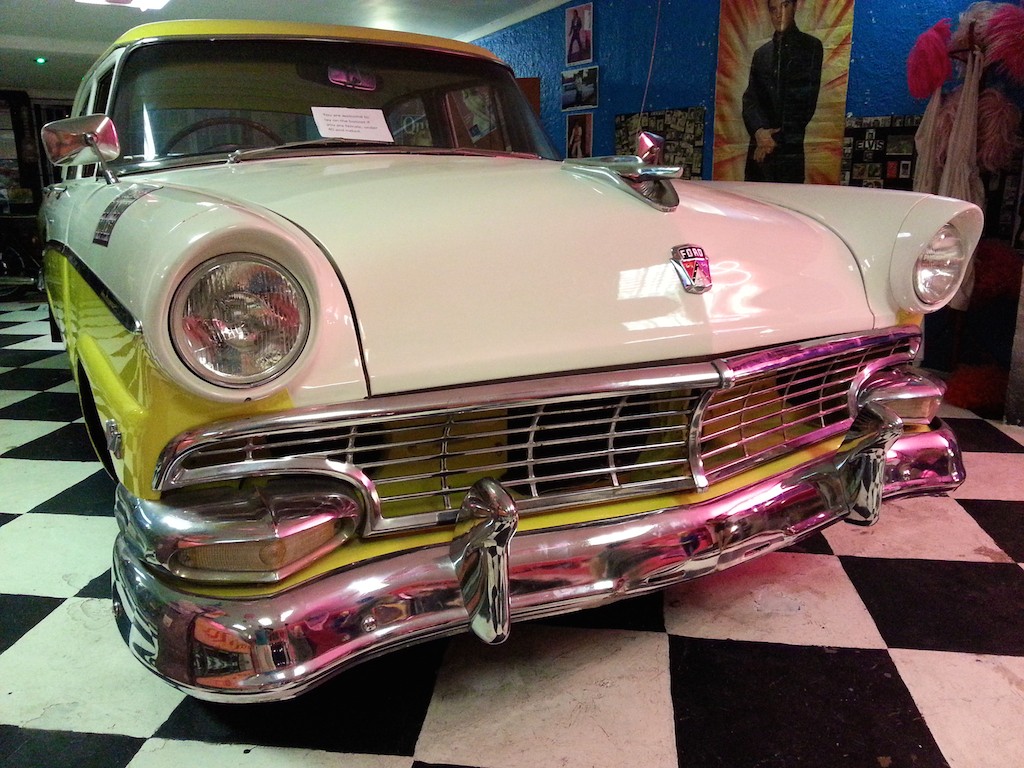 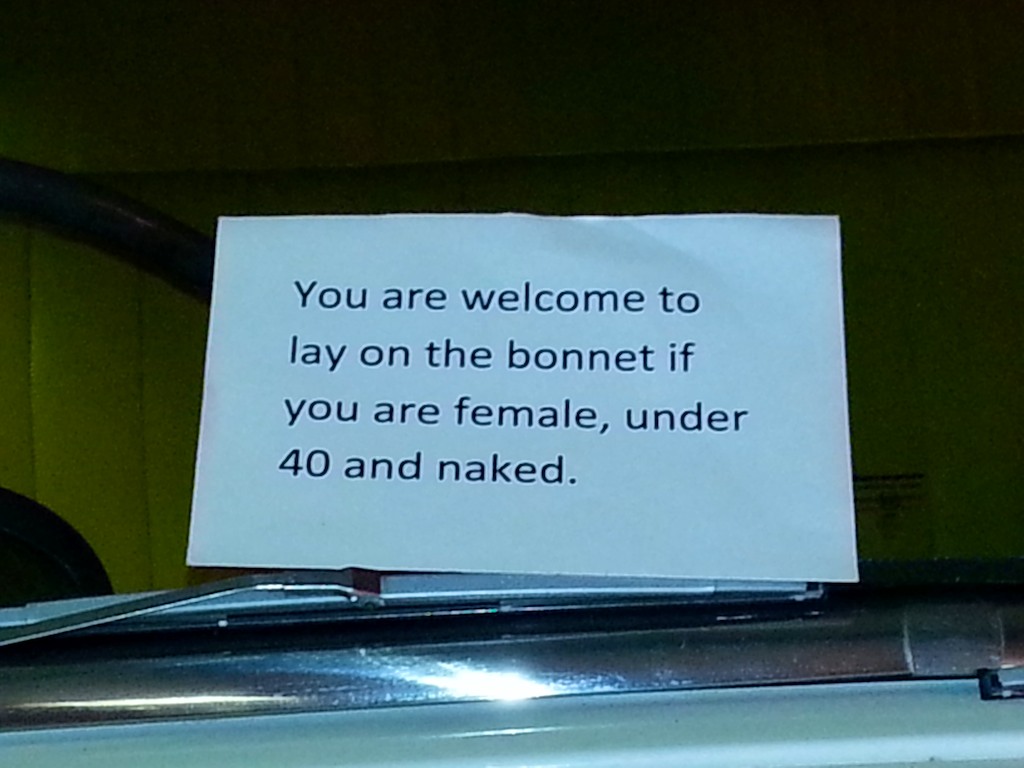