Easy drive to Knysna. As we get closer, I remember how my first impression of the town was its township on 13 December. This time I'd really like to go there: it does not make sense to spend a month and a half in South Africa and not go to a township. However our driver, predictably, does not want to get anywhwere near there. He says it's not safe and he is responsible for us, for the bus, as well as of course for his own good health. I am quite disappointed, but what to do?

Right, what CAN you do? Well, you can read a good guidebook and browse the web, that's what you can do. And that's what Valentina and I start doing. She hands me a copy of the Lonely Planet guidebook, which makes reference to an association that organizes tours of the township. It's called Emzini and there is a phone number. One minute later I am talking to Penny, who at first sounds a bit surprised to hear me asking for a tour of the township in the afternoon. She asks if she can call me back in five minutes.

Five minutes later she is back on the phone and, much to the surprise of our driver, we are on. I tell her I'd like to add some food: I am always interested in eating local food and never tried township delicacies yet. Assuming there is such a thing as a township delicacy. We agree to meet at noon by the big clock tower at the Knysna waterfront.

Penny is with Ella, a young black lady who lives in the township and is behind the idea of Emzini. She grew up without much education during apartheid and later thought that she could start a business by making it possible for tourists to become acquainted with the reality of the townships. She met Penny in church and together they started Emzini.

Ella tells us that until recently this was mostly an area of "informal" housing (slum) with no toilets, no running water or electric power. Now there are real homes in the township people get a free house from the government if they meet three conditions: a) be South African citizen; b) have children and c) earn less 4000 Rand per month. With 20,000 inhabitants, this is one of the smallest townships in the country. Most residents are Xhosa and colored. In addition, several thousand dogs call this home, says Ella with a smile. She had a difficult childhood and could not afford to go to college. She found the way of her life in the church and it is there she met Penny. When she started to think of making a business out of township tourism, she realized administration was not her forte, and this is where Penny came in for a mutually beneficial partnership.

As soon as we arrive the first experience awaits us, though none of my travel mates decides to take advantage of it: try some local meat that is being cooked in a large cauldron.

It's a pretty exceptional day today: there is a "manhood ceremony" going on. These usually take place in December and January and mark the rite of passage of young boys to adulthood. Men and women celebrate in different rooms of the house. We are told to separate our boys and girls but in the end, this does not seem to be such a hard and fast rule. The boy in question is under a blanket in a corner.

Everybody is in a state of excitement but it seems that it's the ladies who are especially taken into dances and liquor.

Then we move to Ella's home. We have an opportunity to learn some Xhosa, though the challenges of the clicks in this language are beyond what most of us can confidently muster. Much easier to go for some food and music. She makes fried cakes with cheese and jam. The I ask her to show me how to make Umphokoqo, a staple food here made with white corn flour and hot milk.There are also a number of drums around the house for anyone to try some African rythms.

We can taste the food and drinks it while sitting around her living room and meeting her adopted children. One boy, the youngest, is sleeping, while the others play with us. Grandma manages to sleep in the same bedroom as the little boy, totally oblivious to what is going on.

Enzimi also gives a short class in  the "click language" of her Xhosa nation. Interesting but very difficult to imitate or understand!

Some of the kids play with us, others are busy with their smart phones. A young teenager lady seems flattered when Stefano, our pro photo man, tells her she could be a model. 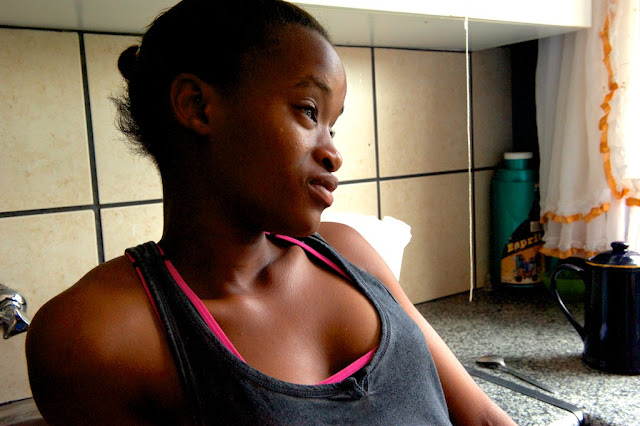 On the way out we walk along one street of the township. A horse strolls slowly along: odd to see a horse here, among so many dogs and chicken, but there it is.

It's three o'clock and 30 degrees. I am quite thirsty. There is a drink seller working out of a container with a small cut out window protected by a strong metal grid. It looks more like a bunker than a bar. A large (440cl) can of Coke costs only 7 Rand, just 50 euro cents. But maybe here the "just" would not apply to the locals. They don't serve alcohol at all though. Not that is would be difficult to find, but it's hot and there is no need for it really. Anyway I don't need to celebrate my manhood today! 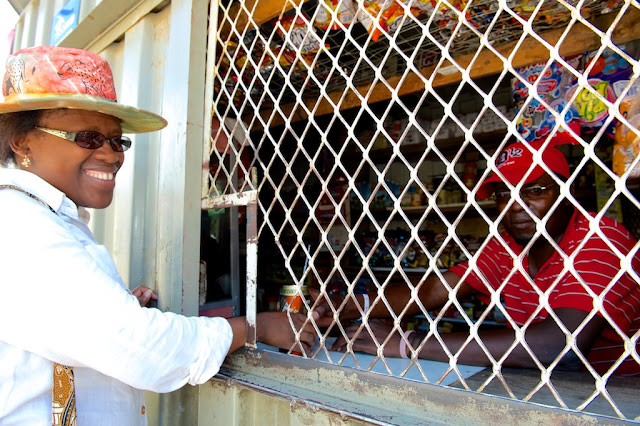 Very few people in the streets, but quite a number of dogs. At some point a donkey appears, trots down the street and vanishes behind a row of houses. Reluctantly, we board our bus again and head to the watefront. We still have quite a way to drive today.

It's been an intense few hours in the township, but it's time to move on. We bid farewell to Ella and Penny under the same clock tower where we met, and we are back on our big bus, where Petrus has been patiently waiting for us. It's a balmy afternoon in Knysna, we are tempted to stop and have a beer by the waterfront. Tourists and locals blend in a polished environment of boutiques, restaurants and souvenir shops. The contrast could not be starker between here and the rugged houses of the township we just left.


Drive to Mossel bay. This time we stay at a rather posh hotel near a big casino. In the evening we drive to town for dinner, again at the "Ocean Basket". Usual noisy and crowded place, like all other Ocean Basket restaurants, but very popular and we have to wait over half an hour to get a table. Stefano, Stefania and I go for a beer at a nearby bar, and kill time chatting with the bartender about beer in South Africa. When we head back to the restaurant our table is ready: my kinglip fish is very good. It and beer get along very well and after a while fatigue begins to make itself felt. Time to hit the sack, no energy even for a Toscanello. It's been another long day to remember.
Posted by Marco Carnovale