Morning spent walking leisurly in town. Several ladies sell a bit of everything along the road: the same stand will have fruits and vegetables by the roadside and also sell curios on the sidewalk. Some graceful paintings and some tacky T-shirts, all mixed together with the inevitable Mandela paraphernalia. Just behind the displays, I can barely see simple small houses where they live, I think.

Not far, next to the pumps of a gas station, a half dozen teenagers are celebrating the new year in the street, dancing, singing and performing some remarkable acrobatic rap dance. They are most excited when I stop to take pictures and quite happy to adjust their routines so I can take my best shots. 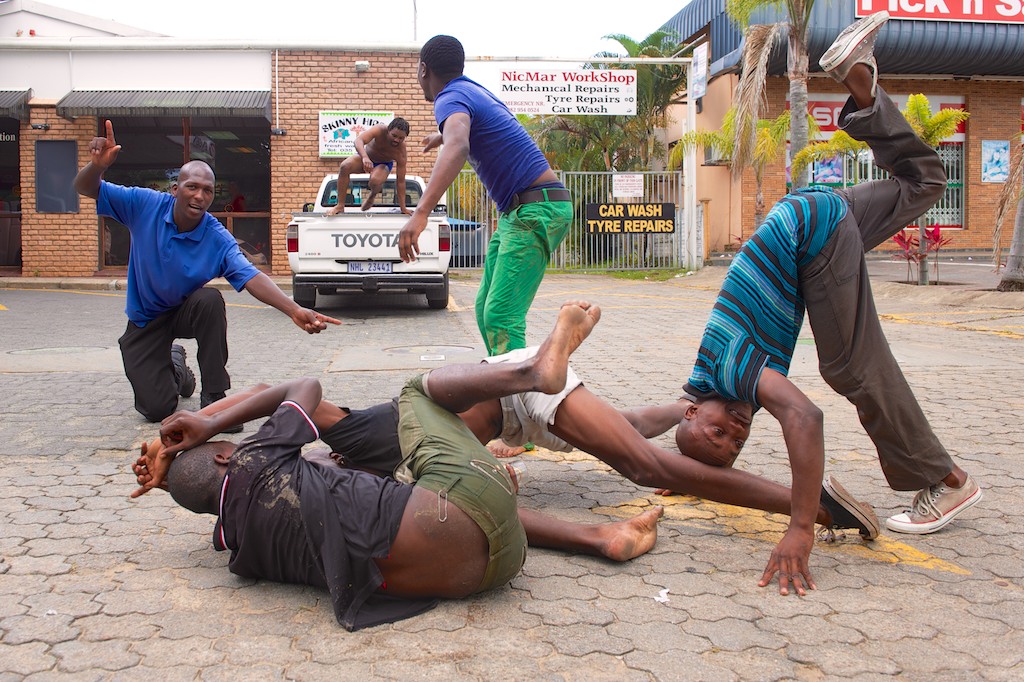 This started as a cloudy day but by noon the sun is high in the sky and it's rather hot. Decide to skip lunch and spend the rest of the morning by the pool of our hotel. No one is around and it would be very peaceful were it not for the manager of the adjacent restaurant who is yelling at a waitress because she has not tidied up properly after breakfast. He is actually doing the cleaning himself now but keeps screaming that this is not the manager's job. She sits in a corner, silent, motionless, looking straight ahead of herself into a bush. 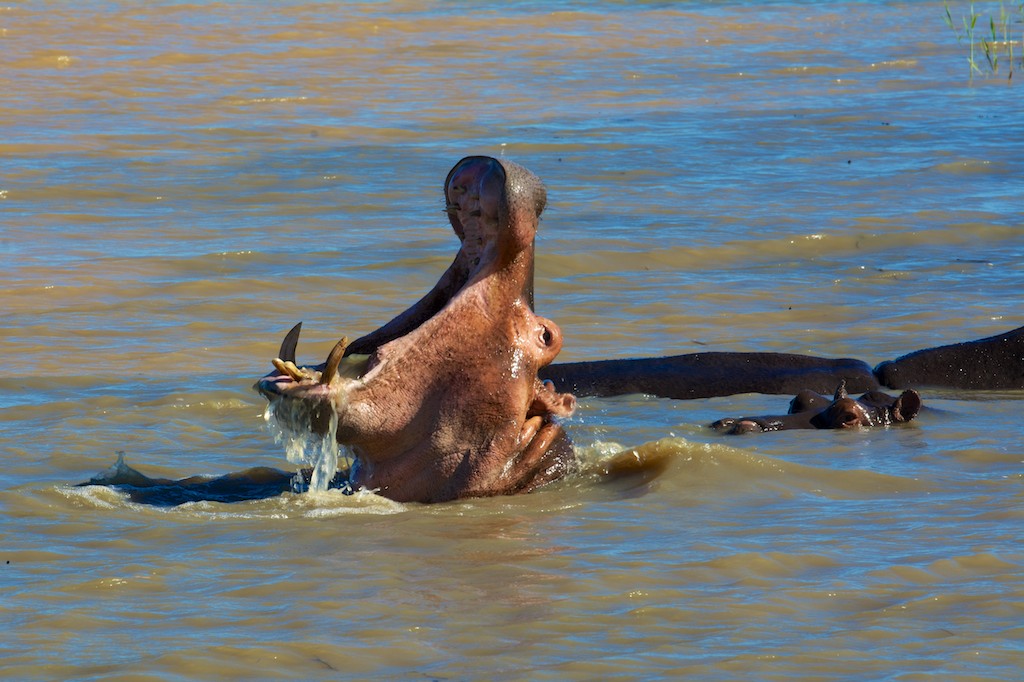 In the afternoon we all take a cruise n the estuary to see hippos and crocs, plus a lot of other wildlife.The eight hundred hippos who live here, we are told, eat 40kg of grass every day each. Actually every night as they spend the day in the water, whence they come out after sunset to graze the fields. All together they produce some 32 metric tons of dung per day! Which is apparently the favorite food of prawns, a local specialty. Well now I know what's in my plate when I order delicious South African prawns. 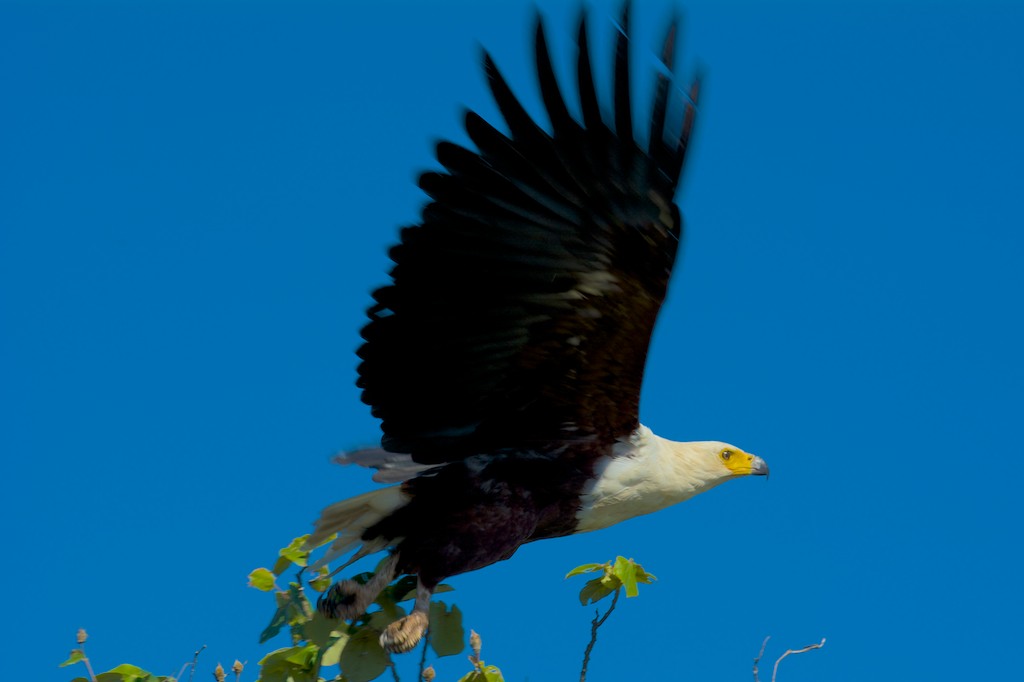 Just thinking as I disembark from the crowded ship and make my way to the pier: hippos are the biggest killer of humans in Africa, more than any other big fierce animal like lions or leopards, and second only to malaria carrying mosquitos. And now they turn out to be a major feeder of humans, if an indirect one. Who would have guessed?

After the cruise, Valentina, Luca, Rosella and I head to the beach. We've been told there is a huge party there every year on New Year's day. I've seen some packed vans driving around yesterday and today, but there do not seem to be more people in the streets that one would expect during a holiday. Talk of understimating...

We need to walk for about 2 km from downtown S. Lucia to the beach. It's about 4pm and the sun is already beginning to set behind out backs. As I hold my two cameras, I can see thousands of people who are walking away from the beach we are heading to, and beging to snap away at their cheerful and satisfied expression. Their party is over and they are heading home. I try and walk faster to reach the beach while there is still good light to photograph and the people are partying. I am afraid I am late, party must be over with so many thousands leaving, but hopefully some stragglers will still be there. 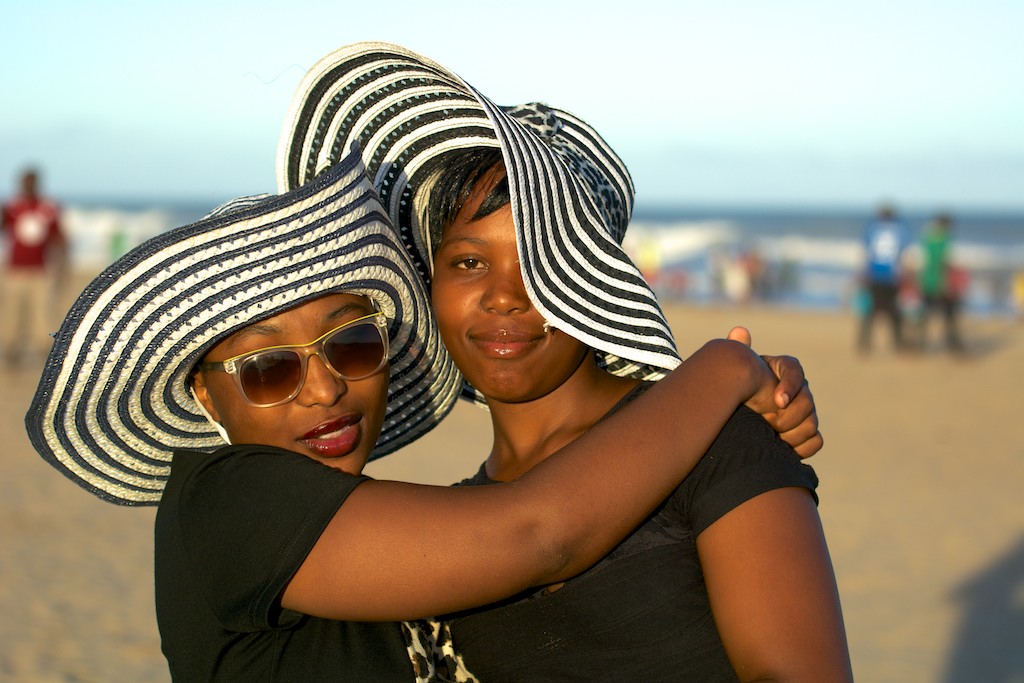 But I need not have worried at all. As I approach the beach, and can actually see the blue horizon in the distance, the long line of people leaving continues, but the source of the flow is an infinite crowd that strolls to and fro, swims, eats, drinks (no alcohol is allowed though) and makes merry. Everyone I meet is happy to chat, exchange happy new year wishes, take pictures together and exchange Facebook friendship on our cell phones. 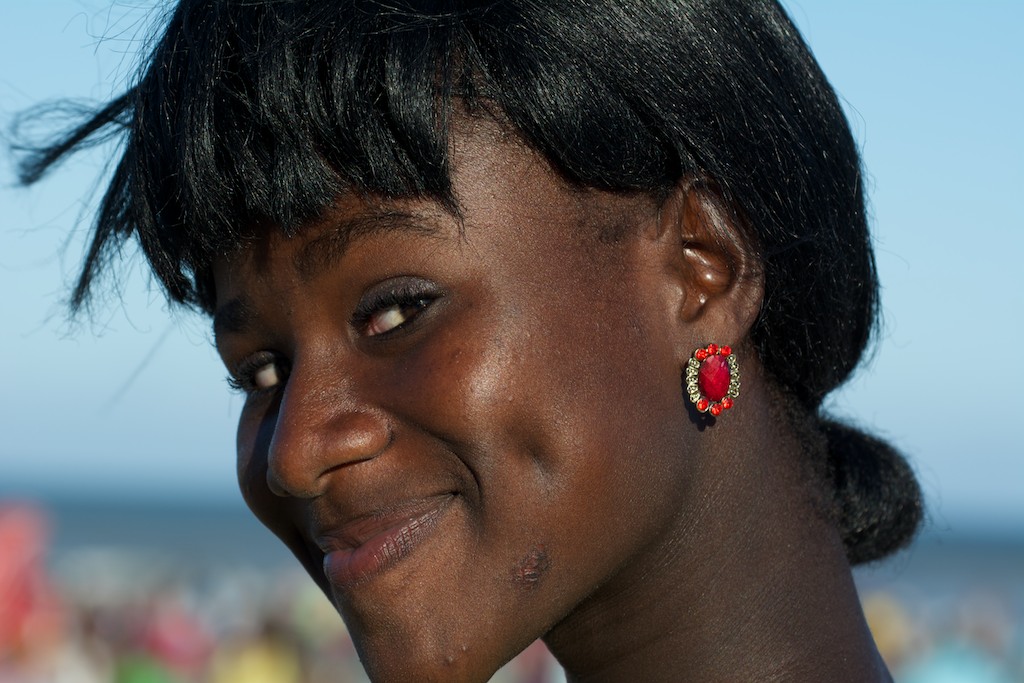 I have never seen so many people together in my whole life, and probably never will again. Unless I come back for another new year celebration at the Saint Lucia beach, that is. Hundreds of thousands of people as far as the eye can see, for kilometers on either side of the spot where we reach the water's edge. All are blacks except my three fellow photographers, a few albinos and me. I can't of course be sure there were no other whites, but I won't see any for the following three hours.

A few policeman and policewomen patrol leisurly but no sense od tension or conflict. The only exception is three drunk guys holding beer cans who talk to me with a clearly hostile attitude while I am exchanging Facebook nicknames with a lady I have photograped. It is strictly forbidden to take any alcohol to the beach today, I have seen several signposts to that effect, but how do you check hundreds of thousands of partying youths?

She insists on typing her name on my Facebook app and they give up. Then another small man maybe twenty years-old wearing red and yellow sunglasses comes forward and asks if everything is OK.

Everyone is quite happy at being photographed. Many ask for it. Several offer their Facebook address to receive their photos. Only the three or four albinos I meet don't want their pictures taken. Maybe they are ashamed, maybe they fear that circulating their images might put them in harm's way. Though not as bad as in other parts of Africa, superstitions on the powers of albino body parts exist in South AFrica as well.

On the way back to town I notice many people with large jars, maybe 5 liters, full of sea water and some sand. I ask why they take sea water away and the disarmiblgy simple answer is that they mix with tap water and make salt bath at home!

Dinner time: it's hard to find a restaurant, many are closed and those which are not are booked solid and often have a long line of people waiting outside. Even the restaurant of our own hotel is overbooked, the kitchen closes early and there is no way they can feed us.

We consider going to a fast food someone we talked to mentioned might be open in the township of Mtubatuba, some 25 km away. We have little reliable information and might be just wasting time going there. I make some phone calls to numbers provided to me by a seller of curious who is hoping to exchange a zebra skin currently in his shop with some of the notes in my wallet. But the chances of us driving to Mtubatuba and finding an open restaurant seem to be considerably below 50%.

Moreover, our driver, who last night had supported my hypothesis that it would be safe to visit a black township as a group, bulks at the idea of actually taking us there tonight. He says it's not Soweto. It's not welcoming, crime is high. He fears for our safety and the car's. This makes me more rathr than less eager to go so he calls the company headquarters to ask permission (or at least he says he does) and the answer is no. So much for the township experience, for tonight anyway. But we still need to eat.

In the end, and at the end of a long wait in the street in front of the curio shop, with the owner still looking my way hoping for a deal on his zebra skin, we eat at the Reef and Dunes restaurant, which is right next door to it. Warm welcoming and pleasant atmosphere under their thatched roof. Lots of good beer and their fried butterfish is excellent! I did not know at the time that it can be less than healthy to eat it, but it did no harm to me. Time to hit the sack, it's been another long day. 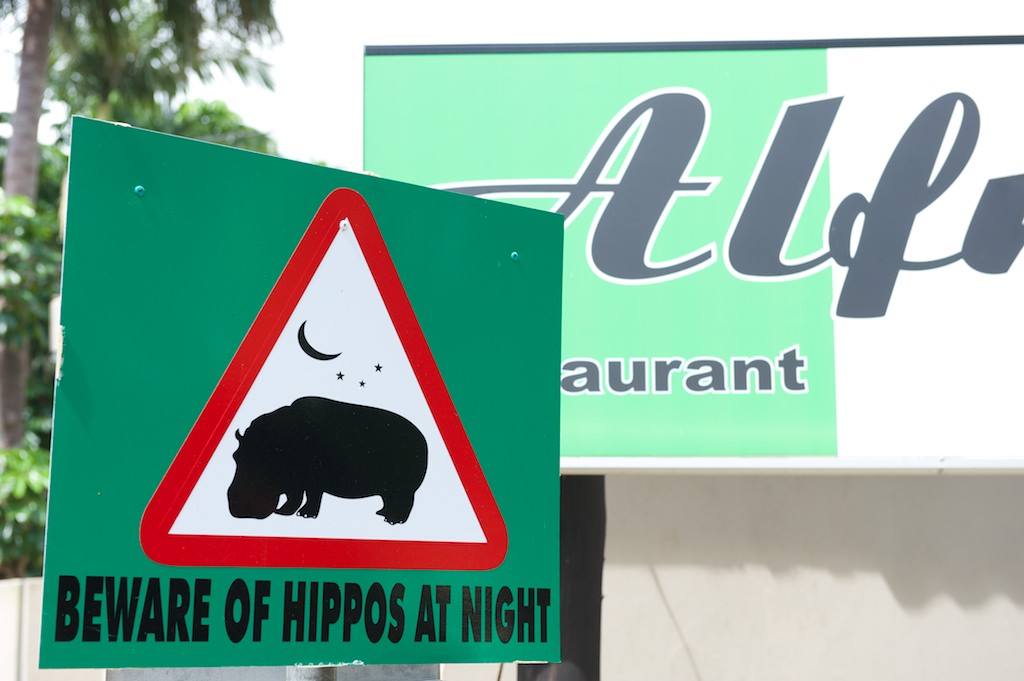 At night I can hear the grunt of several hippos that have walked ashore. They can be dangerous. Several signposts in the streets and in the garden of my hotel warn everyone to be careful with hippos. And even more careful with monkeys who roam around private property and take pleasure in grabbing anything that strikes their fancy.
Posted by Marco Carnovale