We get picked up early for a pre-wedding ceremony in the groom's village, about half an hour away. Here we meet his relatives and assist to a small ceremony in the paternal house.

They tell us how the husband went to the house of bride to take her with him and left a chicken as a symbolic form of gratitude to her family for having brought her up!

On a simple wooden table in the middle of the main room of the paternal house, we are offered tea, peanuts and cigarettes.

All around are many old houses with clay tiles, wooden beams and wood floors.Some are being demolished for new ones with flat roofing and cement bricks. More functional if less charming.

Back in town we see a rather large Christian church next to a Buddhist temple. We get our shoes cleaned  by a happy lady (one of many) who is working on the sidewalk with a little stool, a chair for her clients, brushes and polish. She is happy, smiling and works fast and very well!

We are told that this town of Leiyang also hosts the biggest cement factory in Hunan and a huge coal power plant they are very proud of! Also a shoe factory, not to mention a gold mine: 20 percent of china's gold is extracted in Hunan.

At the reception, people come and give envelopes at a table by the entrance where each envelope is opened and the money counted, then most of them just eat and go away, unabashedly taking leftovers with them! The meal is scrumptious as expected, local cuisine, moderately spicy. The bride and groom spend some time at the different tables, and at the end they come to ours. They are exhausted, but finally can relax a bit and eat their lunch! 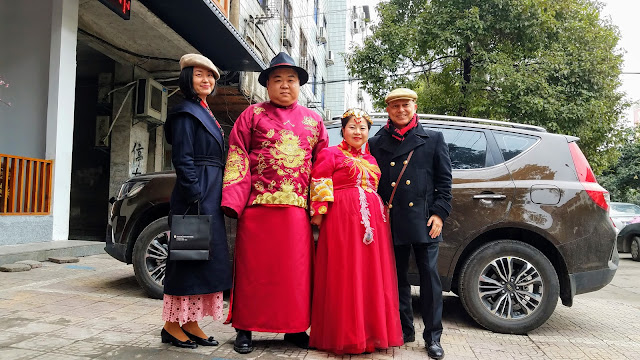 We later take a walk around the Western Lake park with a large pond and bridges by the western lake middle road. Lots of children running around, many elderly men play card and mahjong. One lady is screaming obsessively at her son for who knows what reason, then starts to hit him. Lifang tries to calm her down but she tells her to mind her own business!

There is a beggar with broken feet, he says to my wife he was a construction worker but fell from the 3rd floor of a building and broke both his feet. He says he gets 200 rmb a month from government, just enough to pay rent for a room. Then has to beg for a living, moves around on a small sled with 4 little wheels and pushes himself forward with two broken metal pipes.

My impression is that it is not easy to be a beggar in China, it is not a compassionate culture if you can generalize about 1.5bn people. His pot is almost empty. I am thinking of London where beggars get much better treatment from passersby but a better comparison is India where (again difficult to generalize) people give more easily in the streets. Quite often I've seen people who look poor give to those who are poorer. In China apparently a lot of beggars are fake, they pretend to be sick or handicapped.

In the end we manage to buy tickets at coach station to go to Guiyang tomorrow, no chance for train, but better than walking!
Posted by Marco Carnovale