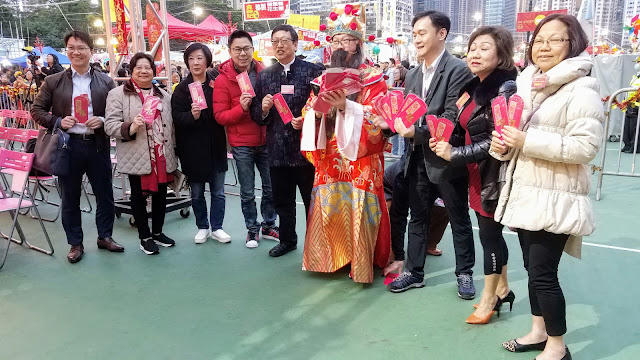 Visit a new year market with lots of flowers, food and a couple of musical shows. Huge crowds! The flow of the masses of people is channeled so that everyone is going in a one-way direction around the portion of Victoria's Garden at Causeway bay which is dedicated to the fair. It would be impossible to have everyone move at random, freely, there are just too many of us. Those in the middle of the human river can't even see stands on either side!
In the middle of it all there was a theatre with a sequence of shows: singers illusionist, some free snack are offered to the crowd.
For street food, Hong Kong is rightly famous and today is no exception. We can stand in a fast-moving line at one of many howker stands and buy some quail eggs on a skewer for me and a pot of beef noodles for my wife. No meat, no meal!
While we are munching away, waiting for a show to start, a charming lady in her seventies comes to talk to us. She speaks good English and says her slight American accent is due to the fact she lived in Massachusetts for a few years. Her brothers went to MIT, my classmates! Then they decided to come back to Hong Kong. She is happy about her choice, this is home, but is worried about the future of the Special Administrative Region. A dilemma many Hongkongers face after the return of the British colony to China in 1997. As usual, the British left their old possession in a mess, just like India.
Filipino helpers are mostly sticking to themselves, there are so many here in Hong Kong, they are let in pretty easily to help out in the homes of the middle class. It is paradoxical but it is easier for a Filipino to come and work here than for a Chinese!
Dinner at one of the thousands of "hole in the wall" eateries of Hong Kong, this we found by chance as it was the only one still open at 11pm, excellent pork noodles. We sat at a cramped table along a narrow corridor and were joined by a talkative local lady. She is an ethnic Chinese but actually comes from Canada and is a regular here, she assures us we ahve been lucky to find this place by chance as it is one of the best "holes in the wall" around. She complained about mainland Chinese who come in droves and empty shelves of whatever it is they can't find in China. Baby formula is a constant. I don't really understand: why is it so difficult to procure more baby formula? If there is demand, local shops should be able to just order more from international suppliers and let the Chinese buy as much as they want.
Christians in Hong Kong.