Full day tour of the city with Lesley, an independent local guide I found online. We have had extensive correspondence before my arrival and I have detailed my priorities to her, though today being the 26th of December many of my points of interest are closed. I am disappointed to learn that the Museum Africa, the most important in Johannesburg, is closed. So is the Apartheid Museum, which acquires a special relevance now that Mandela has passed away. Oh well...

Leslie comes with her minivan at 8:30 and we are off to town. We proceed first to Rosebank Mall for the African Craft Market, a much ancitipated stop of my tour. My 4.25 meter high wooden Namibian giraffe, which I bought in Okahandjia in 1997, has long been waiting for company in my Brussels home's foyer. Here I was expecting to find her a mate - I mean not necessarily another giraffe, but perhaps a fellow savannah inhabitant to mark some continuity in the tangible memories of my African adventures. It was not to be. The market is very closed. Lesley is visibly upset because she had called them in advance. Well, so it goes.

It's drizzling a bit, which does not help uplift our morale in the wake of this useless trip to Rosebank. We then move to the first mine, not much more than a hole in the ground really today. What could be a green garden to spend time and remember the founders of this city is actually a haven for squatters. Rubbish and ash are everywhere, and a stench of urine does not encourage us to prolong our visit.

As we drive along Lesley points out various neighbohoods to me, some newer and visibly more affluent, some dirtier, poorer, sad really. The rich areas are mostly dotted with low lying contruction, pretty villas, lush gardens. Most of these are fenced and many are walled off with CCTV cameras and very unfriendly signs that warn of no trespassing and "armed response". Not many people are to be seen in the clean and well paved streets.

The poorer areas are mostly made up of large apartment buildings, criss crossed by dirty roads full of people moving about or just sitting lazily on the pavement, doing nothing in particular. Maybe because it is a holiday and there is not much to do in their small dwellings, just being together in the open seems the thing to do.


Mary Fitzgerald Square and Museum Africa, unfortunately closed. We walk around the square a bit, it is pretty desolate today. Some lively murals spice up the dreary concrete pillars of a road overpass. A few people move about aimlessly and after twenty minutes or so we decide it is probably safer to move on.

We then move to Main street a the pulsating commercial and financial center of Johannesburg. It is not pulsating very much today actually, yes, you guessed right, because of the Christmas holiday. But it is interesting to see the historical plates that dot the sidewalk, with pictures and text documenting the birth and growth of the city around the gold mining industry. 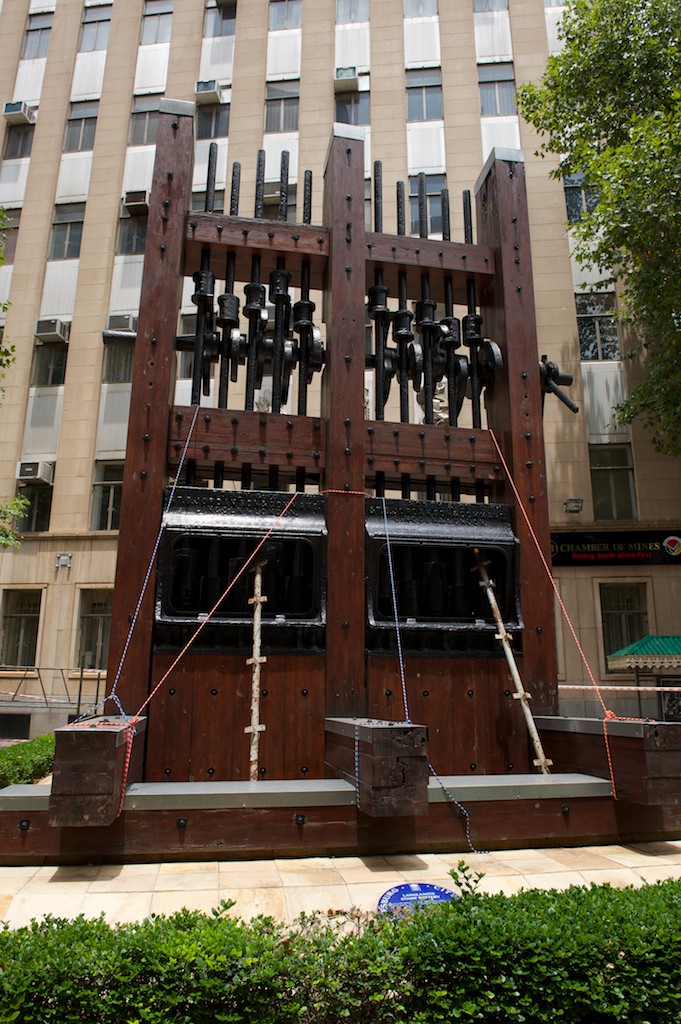 Lesley is especially fond of pointing out to me the few remaining mining machines that are now exhibited in public gardens and sidewalks. An old stamp battery figures prominently among them. It is an old machine that was used to extract gold by heavy pounding instead of grinding.

At the headquarters of Standard Bank, on Simmonds Street, we visit the mining museum. While digging for the contruction of this impressive building in the mid-1980s the earth moving machines uncovered a shaft of the gold mines of one hundred years earlier. It had been a certain colonel Ignatius Phillip Ferreira (1840-1921) who had first struck gold here in 1886, thouch he later lost all his money. Standard Bank which, coincidentally, also began operations in Johannesburg in 1886, decided to name this museum after the colonel.

Despite the holiday there is quite a bit of life at the Carlton Centre, a fifty-floor skyscraper we visit next. At 223 meters this has been the tallest building in Africa for almost forty years.

All offices are of course closed today but there is nonetheless a lively crowd in the large shopping mall that occupies the lower floors. The 360 degree view over the city is not to be missed and Leslie elaborates profusely on the history of the city as we walk around a full circle on the top floor, pointing at the various landmarks through the large windows.

We then go for lunch downstairs in a large shopping mall. Nando's chicken offers half a tasty bird and a pile of potato wedges for a very reasonable price. It is a local chain that's been very successful and is now expanding abroad. I'd like to do some window shopping, just to see what's on offere here but our stroll is cut short by a tall guy who starts folloing us mumbling some unintelligible nonsense. As we hurriedly make for the elevator and back to the garage, a security guards approaches us and asks if everything is OK. Unfortunately it seems that this sort of harassment is not rare in this once posh building. 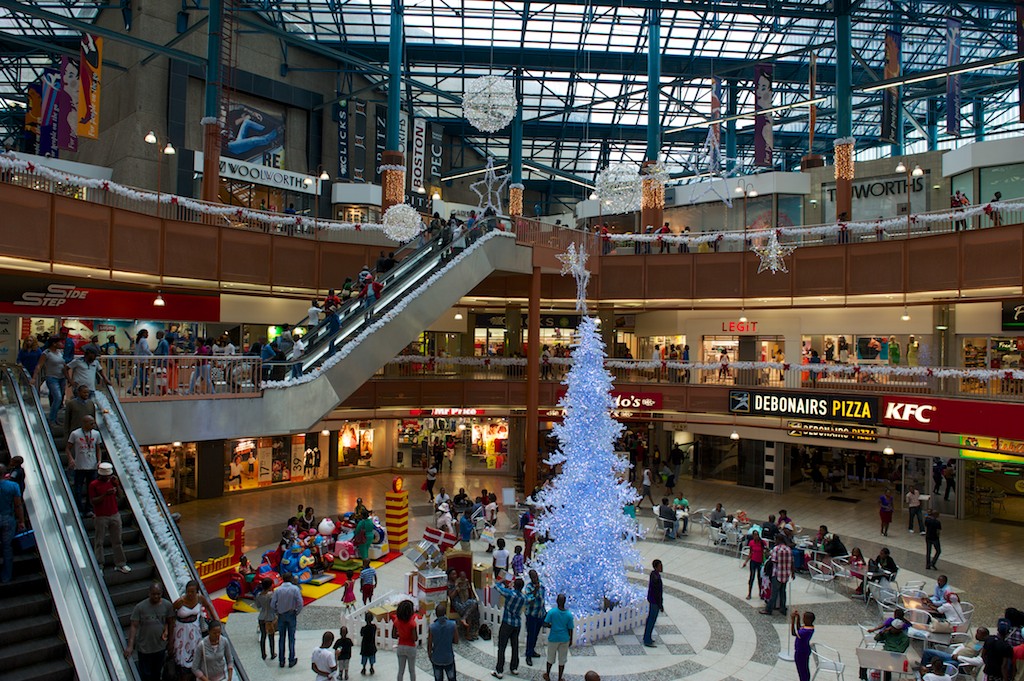 One other venue that is open today, surprisingly, is the Constitutional Court! Lesley wants to take me there because of the significance of the adjacent women's prison. A somber place, but one that inspires hope: the grim facilities that once deprived women of their freedom, in some cases because of political reasons, are now closed and the Constitutional Court, supposedly, is the guarantor of the rights of all in the new South Africa. 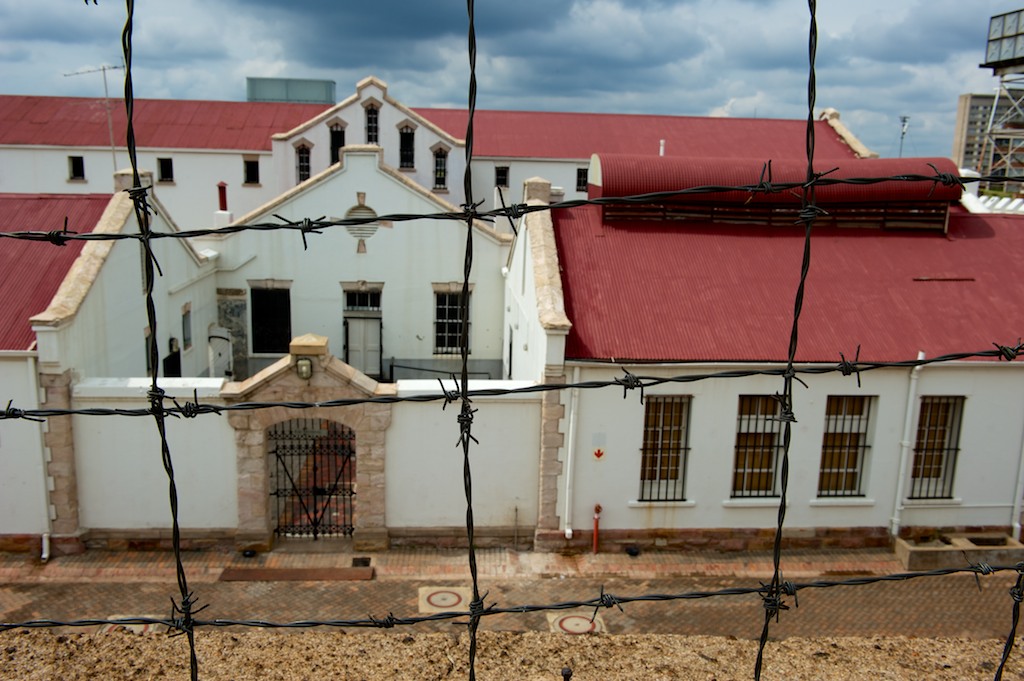 It's been a long day and I spend te evening resting and reading in my room, not before another walk through the incredible casinos next door. It's a surreal view from my window: glittering lights from the casino contrast markedly with the black nught sky.

Next to the hotel, a large parking lot is full with the gamblers' cars. Every few hundred meters a parking guard looks after the vehicles: they are dressed in smart uniforms and gesticulate profusely to attract the drivers' attention every time a new car approaces. Smack in the middle there is a huge fountain with a larger-than-life statue of a Roman centurion and four horses galloping wildly into a ring of water jets...
Posted by Marco Carnovale