Easy wake-up and breakfast in the business lounge to which I have been upgraded for no apparent reason. At check-in, on Christmas day, I had asked to what I owed this gift and the response from the charming lady at the reception was: "It's Christmas, so we thought we'd give you a gift!": Well thanks Madam, no point trying to understand any further. I am all by myself at 8 o'clock. Great cold and hot breakfast. Mostly English style but it's a true rainbow buffet, with lots of African fruits and some Chinese spring rolls

Then on to the airport with the hotel shuttle where I meet my fellow photographers from Italy. We'll be spending the next two weeks together trying to capture the beauties of this country.Their flight via Istanbul is ontime, we are met by our driver Peeter, a tall, blond and blue-eyed Dutch African, and after a few quick purchases of local sim cards we are off.

From the airport we drive straight to Soweto where we meet Jessica, our local guide, and stop for lunch. Actually I don't have lunch at all and instead use the time to walk around and mingle with the local patrons.

It's an easy and welcoming atmosphere on Vilakazi street, where both Mandela and archbishop Tutu had their homes. "The only street in the world where two Nobel peace prize winners had their home" boasts Jessica, our local guide. I suppose Marie and Pierre Curie, who got the prize in 1903, don't count because they were a married couple. Other than that, it sounds like a credible claim, though I confess I have not taken the time to verify it.

Mandela's home is a small construction but of course it carries huge symbolic significance for it is from here that he waged his struggle with Winnie in the 1950s and early 1960s, and it is here that he returned when released from prison in 1990. Tutu's house is nearby but can't be visited as they still live in it. 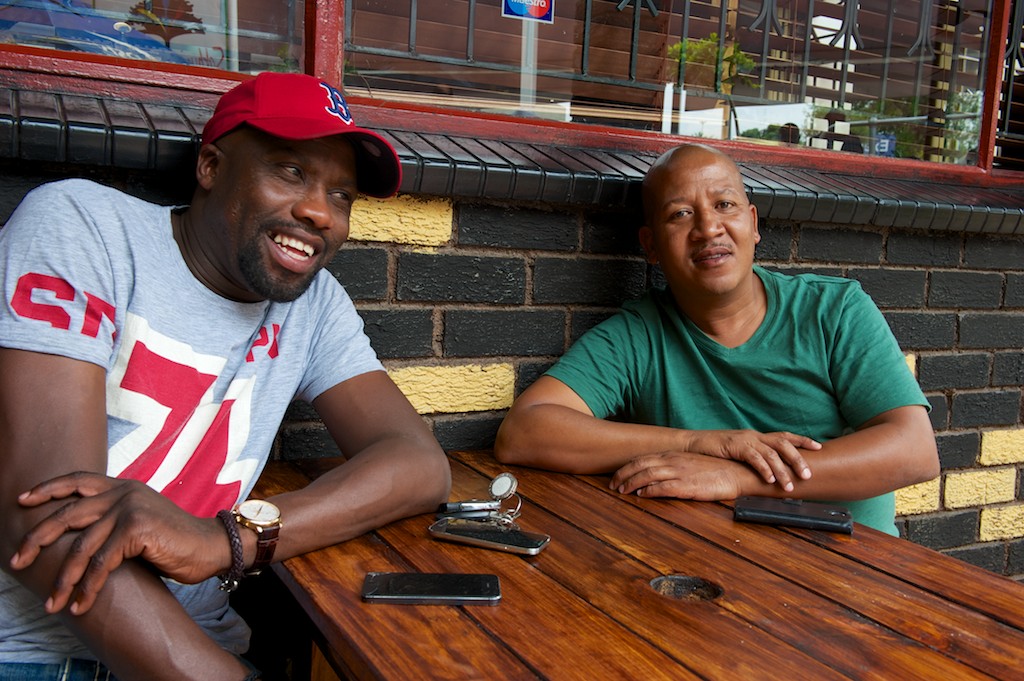 In one large restaurant full of patrons lunching and drinking in the rodside terrace, I fail by a split second to raise my camera in time to take the picture of a young waitress opening the metal cap of a bottle of Coke with her big white teeth, apparently that's how you do it here. I start snapping at families enjoying their lunch. Patrons are all blacks, except for obvious tourists, and by and large they are smartly dressed for the occasion.

Two big guys are having a chat and a
few beers at one of the tables. I ask to sit down with them and after our mutual introductions they start to talk about Italian soccer, which of course they know more about than I ever will or care. We then turn to politics.

They miss Mandela of course and are highly critical of the current president Zuma.They chuckle when recalling how the president was booed at the stadium during the recent commemoration of Madiba.

At about 3:00 pm everyone is done eating and we walk down the street and toward the monument to the rioters of 1976. Along the way we meet some Church officials intent on preparing for the Sunday mass, and stop for chat on the beauties of Soweto. It's one of the many churches that make for the kaleidoscopic panorama of South Africa's Christian religions. 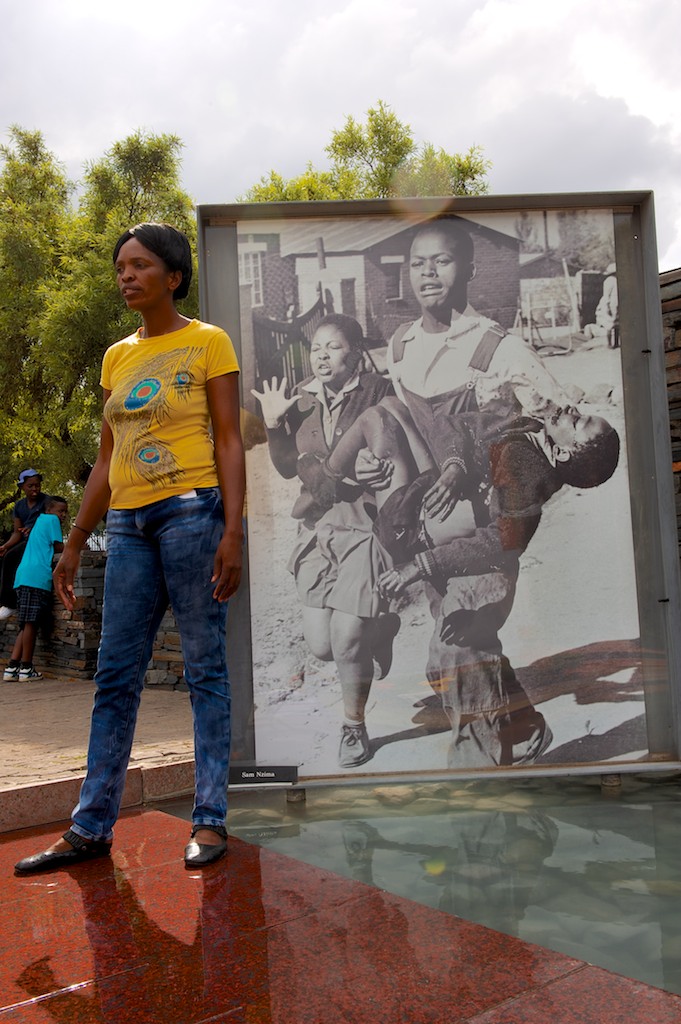 Moving along the street, we head to the unmissable Hector Pieterson monument, celebrating the person whose death contributed to change the history of South Africa like few others. His sister was with him when he died and tells her story in this video.The monument has now become a place of remembrance like few others, with eveeryone taking their picture next to the large photograph from that fateful day. 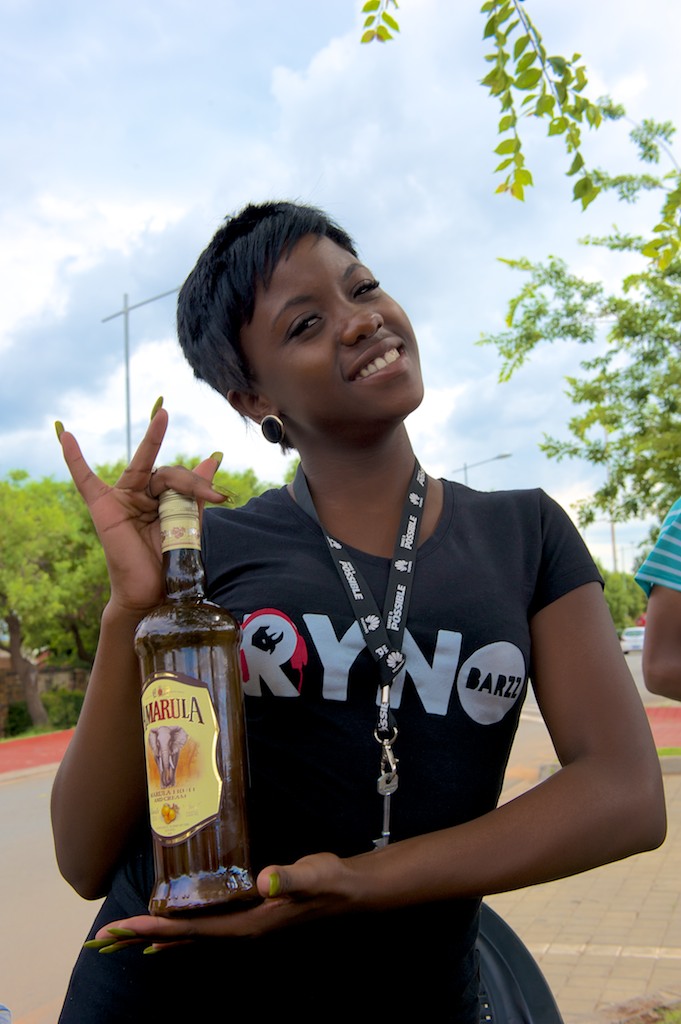 On the way, we run into a group of locals, in their early twenties, who are having a few drinks at an improvised pic-nic on a patch of lawn. Their car is their bar and the booze moves around but they are perfectly sober and warmly welcome us to join for a sip or two.

Drive on to Mapoch (Mabholo in the local language) Ndebele village. Driver uneasy when we stop at a small village shopping mall to buy some South African adaptors. (This country has a unique ans bulky plug size that is incompatible with anything from anywhere else in the world). He urges us to hurry up and move on, especially, he says, as it's getting dark.

On the way out of Soweto we drive by the decommissioned towers of the old Orlando power station. Colorful graffiti mask the history of this obsolete and very polluting coal-fired plant, now transformed in an amusement park. South Africa is growing rapidly and needs more and more energy. This plant was shut down in the late 1990s however after fifty years of honorable service. The white government flirted with nuclear power (and even build half a dozen nuclear weapons, only to dismantle them before surrendering power) and one plant is still in operation near Cape Town.

Our village is hard to find, navigator goes crazy. It tells us to drive into the bush , then straight then it starts babbling away as if it had had a beer too many. We finally get to a small gate: our Ndebele village. We are home for the night.We are the only guests and it seems we might be the only tourists to have come this far for a long time.

At dinner, we are seated in what seem like a communal hall, just next to the large kitchen. After a while a few women come along and prepare a simple buffet of rice, potatoes and chicken, but there are no drinks. They must go and fetch those at a nearby "bar", a place that we will get to know rather well in the coming days.

After dinner we ask for directions to the bar, which is actually unmissable even in the pitch dark dirt roads of the village: its huge loudspeakers make themselves heard a long distance away. The bar, a few rooms of bricks and mortar with neon lights hanging in a rather haphazard fashion, serves beer and a few soft drinks but no water. The beer is nice and cold, coming out of large refrigeratos powered by a diesel generator. There is a choice of two South African beers.

The main point of interest however is a red cloth covered pool table next door, which seems to be a magnet for most youths in the village. We are too tired today but we'll be here tomorrow!
Posted by Marco Carnovale