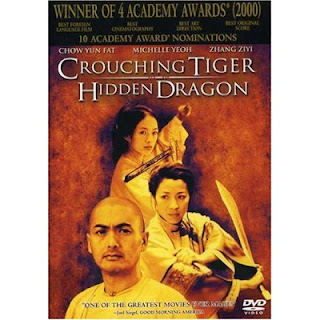 From Sony Pictures' web site: Named "Best Picture of the Year" by over 100 critics nationwide! Two master warriors (Chow Yun Fat and Michelle Yeoh) are faced with their greatest challenge when the treasured Green Destiny sword is stolen. A young aristocrat (Zhang Ziyi) prepares for an arranged marriage, but soon reveals her superior fighting talents and her deeply romantic past. As each warrior battles for justice, they come face to face with their worst enemy - and the inescapable, enduring power of love. Set against 19th-century China's breathtaking landscape, Crouching Tiger, Hidden Dragon is the action-packed, box office smash from acclaimed director Ang Lee (Sense and Sensibility, The Ice Storm) featuring stunning martial arts choreography by Yuen Wo Ping (The Matrix).

A mesmerizing film. I am not a fan of wuxia films, and I believe this film could have done with much less rooftop flying and bullet deflecting. It is an excellent story in itself and it also shows a lot about a dramatic historical period in China (late XIX century). In fact, in my view one missed opportunity of this film is that it could have told us a lot more about the historical context. Also, I think the plot is overly complicated, after a while I gave up trying to follow all its nouances. Yet, it is hard to fault the director for his imprint. It does make a coherent whole and it is impressive. It is also a movie about the endless dilemmas of love and loyalty.

The sound track is beautiful as well and comes out well in the BD. Too bad there are no extras, at this price one would have expected some.

You can see a list of movies on China I have reviewed on this blog.