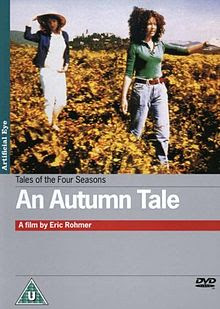 Eric Rohmer's light-hearted romantic comedy, set amongst the vineyards of the Rhône Valley, concludes his film cycle THE TALES OF THE FOUR SEASONS. Best friends Magali, a widow, and Isabelle, a happily married bookshop owner, have known each other since childhood. Although Magali enjoys her life as a wine grower, she admits that she would relish some male companion- ship; a confession that prompts Isabelle to secretly find her friend a man. After placing a lonely hearts ad, Isabelle chooses a suitor, but finds that things don't quite go according to plan...

I won't repeat what others have said about the cast and the style of the director. It is a good movie overall, entertaining and amusing. I bought this movie as part of a series about wine. I was a little disappointed to find out it has only a bit to do with wine: French vineyards provide the background of the story and that's about it. Yes Megali does talk about her wine and her relationship with the land, but she could have played the same role in the film if she were growing olive trees.

Nonetheless I found it a great movie because it highlights the dynamics of match-making and dating in the pre-internet era. That was the time when there were no online dating sites and instead people wrote ads in papers. There was no email (though at one point in the film one can see a Minitel monitor) and if you were interested in someone you had to call. (Or write to a PO address.) I very much enjoyed living through what millions must have experienced while trying to find a partner in those times. The story is far from predictable however, and I won't tell it here...