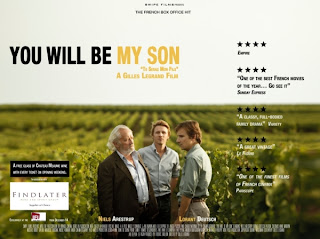 Paul Marseul (Niels Arestrup), owner of a prestigious vineyard in Saint Emilion has a son, Martin (Loran Deutsch), who works with him on the family estate named Clos de l'Abbé. Paul is a demanding and passionate winemaker but is a domineering father. He is not happy that his son may one day succeed him. He dreams of a son who is more talented, more charismatic . . . and more in line with his own aspirations. Things deteriorate as Paul's trusted manager (Patrick Chesnais) is dying of cancer. Philip (Nicolas Bridet), his brilliant son, who is also in the busines, returns from California to see his dying father. Paul sees Philip as his ideal son and turns away from his own flesh and blood.

A film that is about wine but a lot more. Winemaking is the background against which we witness the development of a familiar story with a quirky twist. Wine is an essential part of the story because of what it represents in French culture, though the film makes surprisingly respectful reference to American wine!

The familiar story is that of a son who is programmed from birth to take over the family business, with a controlling father trying to leave his imprint on everything he does. This happens in many families, where sons take over but are not up to par. The film pushes to an extreme the reaction of the father to what he sees as inadequate talent in his son. He does not really try to teach him to stand on his two feet, rather he tries to mold him in his own image. When he fails, he turns to somebody else. Does he love his wine more than his own son, whose problematic delivery killed his wife? Or does he simply recognize it would be bad for both wine and son to leave the estate to him? It is a dilemma it is not easy to get out of. And the viewer is left in a difficult position to judge the father, who eventually pays the ultimate price in an unexpected turn of events.

It should be seen together with the film "A Good Year" which I also reviewed in this blog.

In Europe, you can buy the DVD here

In the states and around the world buy it here

Email ThisBlogThis!Share to TwitterShare to FacebookShare to Pinterest
Location: France