It is pleasantly warm, about 25 °C. Passport control is fast, and customs officers could not care less to check my bags. In fact the only person they seem to be interested in checking thoroughly is a pitch black man who was sitting next to me on the KLM plane. Maybe it's a coincidence, random checks. Maybe not, and it's racial profiling. I don't know. They scan his luggage repeatedly with the X-ray machine, then let him go.

The airport is brand new and very functional, like many in China today. By the time we reach the luggage carousel all our bags are already there, spinning slowly around and waiting to be picked up. It reminds of Rome where a half hour wait is good reason to consider oneself lucky!

We meet Li Yin (Beautiful Music) our Chinese guide. One of them. We will have one "national" guide to accompany us all over the country and "local" guides at each of the cities we will visit. This is mandatory for foreign groups visiting China. She speaks excellent Italian. 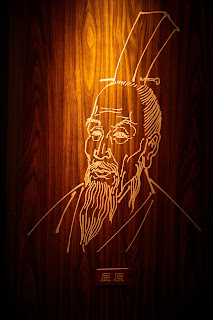 Our tour begins with a visit to the home of the ancient poet Du Fu. A traditional home of a rich man of the Tang era, in the X century of our era. A huge garden, perfectly manicured laws and exotic plants provide a relaxing framework to relax after a long intercontinental flight. Many Chinese families with children play along the many ponds and canals. A serene place. Also interesting architecture and furnishing, though most of it are replicas since the originals have been destroyed over time by fires and the Cultural Revolution.

This will be a common refrain during this trip. The Cultural Revolution has caused immense and irreparable damage to the... cultural heritage of China. In fact it was not "cultural" at all, it destroyed culture, and it was not a revolution either, as it had no spontaneous force coming from the people at all and in fact was manipulated by Mao from above.

A peculiar feature of the house is a photograph of Mao visiting, in 1958, as a sign in English lets us know. The faded image of the Great Helmsman is a true representation of the way he is seen in China today.  Still untouchable, but fading away from the memory of people busy working and getting rich. The taciturn local guides volunteers the view that while people still respect Mao everyone today understands they are better off without him. Before, she says, everyone was poor, now many people can buy jeans and sunglasses. Even if Mao is quietly criticized today, he is still a sort of supernatural being, a larger than life character nobody dares to challenge openly. In an adjacent room there are portraits of other visiting dignitaries from the past, a sad sequence of black and white pictures of long forgotten apparatchiks.

There is no picture of Deng Xiaoping, the pragmatic leader who set off China's transformation in 1979, three years after Mao's death, and who came from Chengdu.

After leaving the house of Du Fu there are still a couple of hours to fill before dinner, and we take a walk on a huge square of this lively city that would have a lot to offer if we had the time. There is a Mao monument in the middle. There are lots of police around, I have read that in the last few days there have been riots in Shanghai, harbor workers protested against price rises. Many have gone on strike, for the first time against a government company. And probably the government fears more widespread popular unrest. There are many small disturbances of this kind in China these days, but none big enough to gain national significance, or to be noticed abroad.

Our hotel is the Minshan, very welcoming, modern but with a warm atmosphere to it. Nice rooms, complimentary bottled water, though at one point someone knocks at my door and a lady of the staff walks in, takes the bottle and locks it up in my minibar, to which I don't have the key. ??? Oh well...
Posted by Marco Carnovale