Up early and off to a bus ride to the mountains of Yulong Xueshan (Jade Dragon Mountain), where we leave the bus and buy some tickets. To do so, one must go through a weird sort of hangar, with a whole series of stands selling anything from oxygen bottles (in case of mountain sickness) to T-shirts, to traditional Chinese medicine, to dried frogs... I end up buying some CDs of local music. 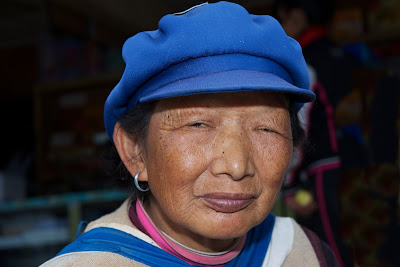 A chairlift takes us up to the “yak meadows”. The view of the peaks from the top is stunning, and the white snow against the blue sky provides a perfect frame for the Buddhist gompa on top of a hill that we reach with an easy 20 min walk. The gompa is not the most impressive I have ever seen, still, it's good to see it here, open for business.

A few yaks graze around, it is all by the book! Not enough time to savor the atmosphere unfortunately, time to go back. I detest fixed schedules when traveling but today I have no choice, I am in the hands of the local guides. To make things worse, some of my clients, especially 50+ single Italian ladies, complain to me! Oh boy... 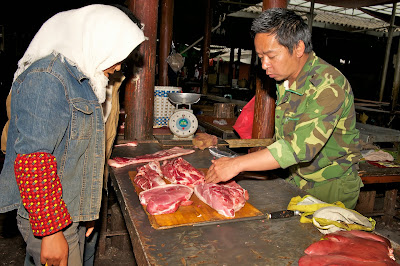 Lunch is in a typical restaurant in Baisha, the capital of the old Naxi kingdom and still one of their major centers, where murals from the Ming dynasty were once world famous, before, yes you guessed it... the Cultural Revolution did irreparable damage to them. Some of my companions begin to display uneasiness with Chinese food. (Figures...) I, on the contrary, find the fare fed to foreign groups to be too edulcorated, its taste made way too plain to adjust to the wimpy palates of Western tourists. Therefore, after making sure everyone has his plate full, I go and eat with the driver and the guide, who get REAL Chinese food: hearty, sometimes spicy, sometimes VERY spicy, and sooooo good! As of today this will become my standard operating procedure for the rest of the trip.

After lunch off to town for a visit of the food market, with impressive displays of all kinds of delicacies, clearly a successful farmers’ market that may not be very communist but has all its shelves full. Very colorful cabbages and other greens are on display next to bright red chili baskets that will spice up local dishes. Southern Chinese cuisine is known for being generally more spicy than the rest. In a semi-dark covered pavilion a number of butchers are busy chopping and skinning all kinds of animals, but especially pigs and cows as I can tell. No refrigeration system is in sight but the meat looks very fresh, I suppose there must be a high turnover.

I bought a red mahjong set, kind of old looking if not necessarily that old. Nearby, a palace that used to belong to an old pre-revolutionary governor exudes some ancient charm. I especially appreciate its old wooden doors. Many frescos all around, we are told by our local guide, were destroyed by the Red Guards during the Cultural Revolution, but these doors survived because local farmers painted them over with portraits of Mao.

We then move on to the park of the Black Dragon Pool. It is a stunning location, with lots of history, art and architecture which we only have time to taste in part.

There is an old and very big camellia tree. It has its own guardian, who is well known because he has had this job for over 50 years. He says, through our guides, that the Red Guards wanted to cut the tree down as it was an "old thing" but he stopped them and told them they would have to kill him first, and they gave up. Who knows what really happened but the tree is here!

Dinner tonight brings a new guest: Baijuu, the rice liquor that will accompany most of the rest of our dinners in this trip. Sort of similar to grappa (very sort of) it can be made with rice or sorghum. It has a rather coarse taste but can go down very well after a hearty Chinese meal.
Posted by Marco Carnovale