We leave Oxelösund and the Ericsons after a hearty breakfast at 11 o'clock. In town I manage to buy a Swedish flag. I collect, and hang around my apartment in Rome, flags from the countries I visit. I always wanted a Swedish flag because of the special significance of this country in my life, but did not manage to do so until now. When I was dating Karin Ericson I asked her about buying a flag and she recommended I write to the king. So I did write to the King of Sweden to the effect that I was going to get married with a Swedish lady and we wanted a flag from him as a kind of blessing. I did not really lie, we were a real couple (as sixteen-year-olds can be) and in theory we could have been married at some point in time. The secretary of the king wrote that he had no flags to give away; however, she sent me a wedding picture of the king and the queen. 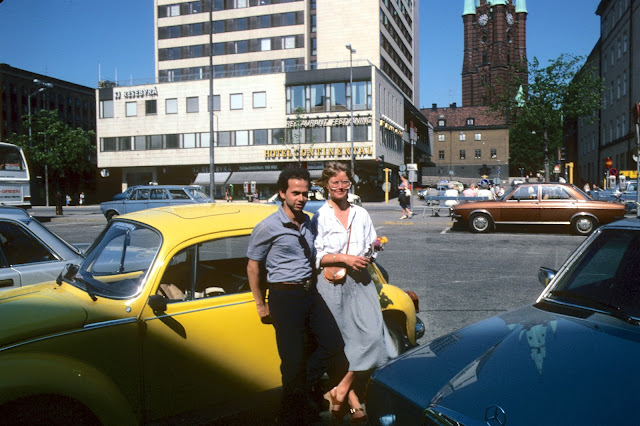 Flag properly folded in my suitcase, we drive to Stockholm and meet Lena, Karin's sister. She is as stunningly beautiful as she was three years ago. We have a ice cream while strolling together in the pretty downtown area, and after saying good bye we hit the road again, direction Nynäshamn, a small port town where we board a ferry headed for Gdansk.