After a long night spent listening to the moans of drunken Scandinavians, we arrive in Stockholm at 9 o'clock in the morning. The plan is to visit the Ericsons, the parents of my high-school girlfriend Karin. I have lost touch with her, but they never forget to write to me for my birthday, and we have kept in touch over the last few years. 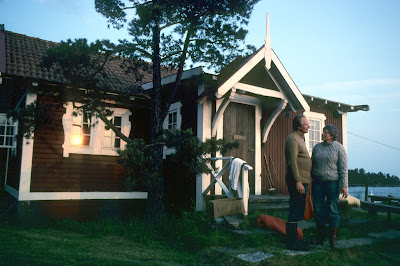 We drive to the Ericsons' apartment in Hasselby, near Stockholm, but there is no one there. It is a green neighborhood, lots of flowers. Quite a change from the last time I was here, in the depth of winter, with sub-zero temperatures and all the flora either frozen stiff or covered in snow. Given the difficulty of communication, I had not been able to advise of our arrival, though I had told them months ago we could come by in the Summer. And anyway they had always said I was welcome any time, and I know they meant it.

We then drive to Oxelösund, where they have their Summer house. No one to be seen. Unusual. We wait a bit and have a light lunch. After a while Bo and Ulla-Britt Ericson arrive. Ulla-Britt is a bit surprised but smiling, Bo is enthusiastic as usual. Maybe my mother-in-law-that-never-was is a bit disappointed that her daughter and my did not solidify our relationship? Who knows?

We are fed abundantly with smoked fish from the Baltic, and then four of us set out on the Ericsons' small outboard-powered wooden boat to go fishing in the archipelago. These cobalt blue waters always bring to mind the USSR to me as a young student of defense affairs. It is here that the Swedish navy has repeatedly spotted unidentified submarines - widely assumed to be Soviet - trying to make their way and sound the defenses of the nearby naval base at Karlskrona. The USSR always denied its subs crossed into Swedish waters, but who believes them? I keep looking at the quiet waters to see if a periscope emerges.

No luck today... we see neither fish nor subs.

(P.S. In 1981, scarcely a year after my visit, a Soviet submarine ran aground for all to see a few kilometers from here!)
Posted by Marco Carnovale