Lazy morning and lunch at the Rossiya hotel, absolutely forgettable. Much (most?) of what is on the menu is not available. After repeated "we don't have" by the waiter we ask what they have. Some mediocre meat and potatoes.

We then visit the "Beriozka" shop, that sells all kinds of stuff that is much in demand in the USSR but taken for granted by us. These shops have a long history and exist in several Communist countries, we use Pewex in Poland, but here they have a special transgressive flair, maybe because most Soviet citizens are not allowed in. Prices are quite high, really the same as in the West and much more expensive than Poland for certain items: for example a beautiful book on the Kremlin that I bought in Warsaw for 430 zloty (15 dollars) here costs 40 dollars. In fact they sell quite a few beautiful art book, Soviet authored and Soviet produced, that are not available to normal Soviet consumers in regular bookstores.


We then go the Kremlin for another walk. Lots of soldiers marching around. There are many churches in the citadel (the meaning of the word "kremlin" but they are ALL closed NA REMONT, "for restoration". We try to buy tickets for the famous "multifaceted palace" but they tell us you must book several weeks in advance. No luck. However we are treated to a free show of thousands lining up to visit Lenin's embalmed body in his mausoleum.

We all feel a bit depressed and keep walking along the Kremlin wall, chatting with Igor. He says that it is very difficult for a Soviet citizen to travel abroad. First, you must apply at the local police station, and they will apply on our behalf to the relevant foreign consulate. Then, after you have a visa, you can apply for a passport. Strange, hard to believe in fact, that any embassy would issue a visa to someone without seeing a passport. Anyway it is well knows that it is difficult, most of those who do leave go on organized tours. Private trips abroad almost unheard of and usually require an invitation by someone in the country to be visited. 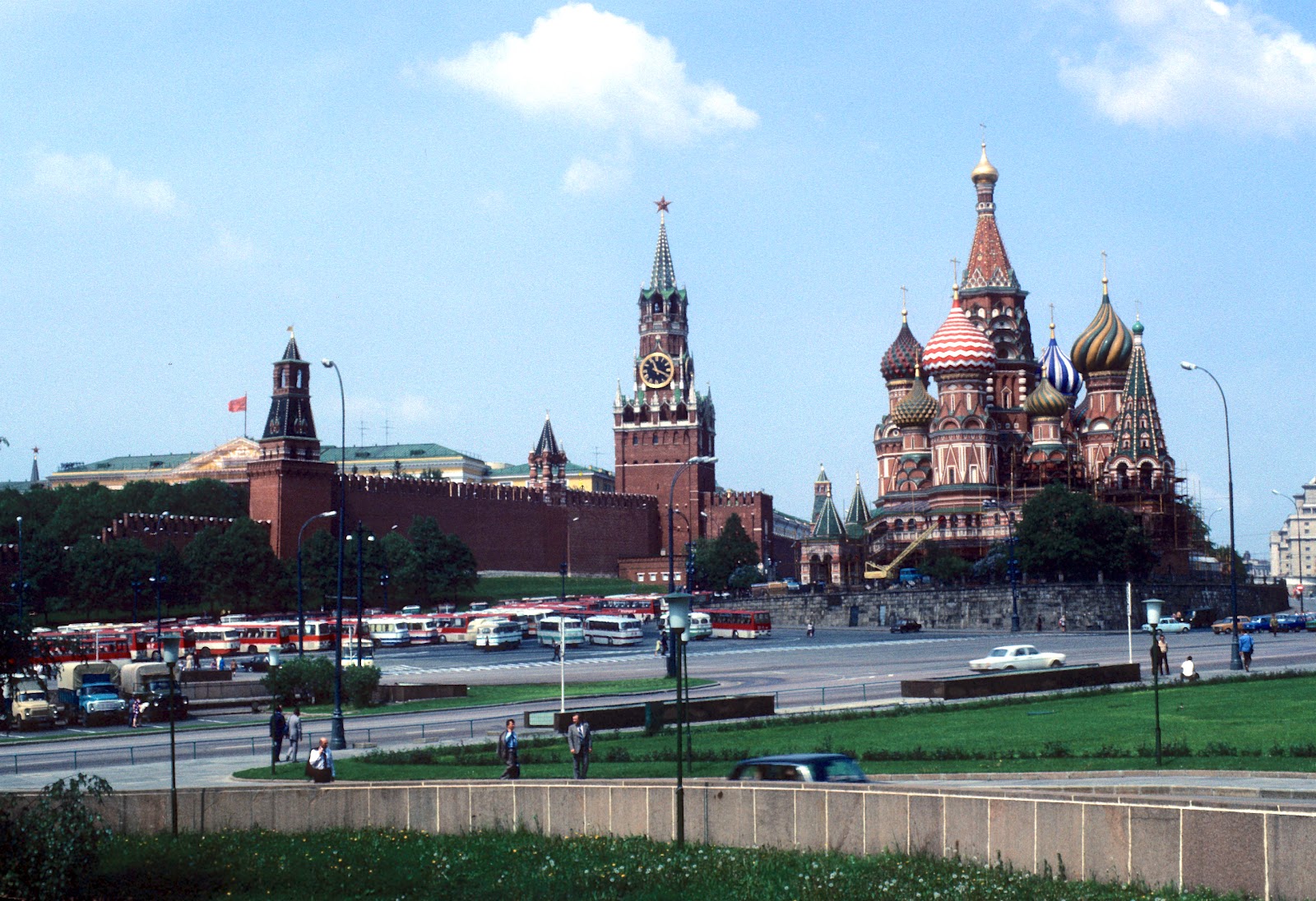 After a while we see a small door that is half-way open. There are a couple of guards but they are mostly intent at chatting with each other. We decide to try our luck and walk through the door. The guards notice us and come to meet us, speaking Russian and indicating fairly unequivocally with their hands that we must leave. I reply to them in Italian that we are tourists, only here for a few days, we'd like to see more of the Kremlin. I was about to say I am Communists and a friend of the Soviet Union but that would not have been very credible with three Americans by my side. Meantime, some stranger, a Russian, comes by and starts talking to the guards. Not sure what they say for the next few minutes, but at the end of it all the guards escort us to a ticket office where we can buy the last three student tickets + a regular ticket for who knows what.

Once inside our jaws drop at unison. There is a fantastic museum of the Tsars' ceremonial weapons and armour, robes, furniture, carriages, etc. Absolutely stunning. There is a separate museum for the jewels of the imperial family but that requires yet another ticket and we can't get it today. Not allowed to take photos, unfortunately.

In the evening, another amazing show in the Kremlin's Congress Palace's theater: a dance performance by the Bolshoi ballet, one of the most famous in the world. Much much better than anything I've ever seen before, or that I am likely to see again any time soon. So much better than the one we saw in Warsaw. Again, no photos.
Posted by Marco Carnovale