Again wake up at dawn and the adrenaline starts pumping. Breakfast is devoured faster than usual as we try and get back on to our vehicles and out to the lions. They probably have not moved much since last night and it might still be busy with their mating procedure. It usually goes on for a few days, 20 to 25 times a day. So the chances of seeing them in action again are reasonably high. 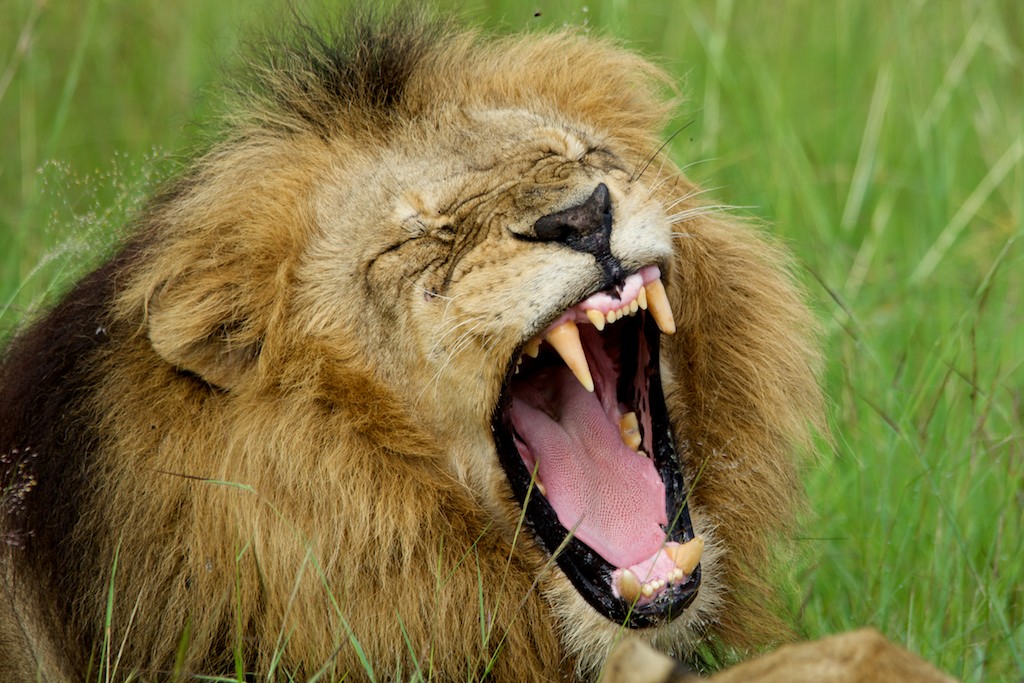 But first we need to check out, as we'll be leaving Kruget today. I take my packed bags out of the room and onto the balcony on stilts that overlooks a thick bush, and go back into the room to double check I did not leave behind any chargers, razors, slippers, hats etc. As I come out again and definitively close my room's door behind me, there come my three ladies of two days ago: they must have been waiting in the bush for me to appear and of course they make it clear that they are going to take my bags down to the waiting van. They hardly speak a word, and I don't either, but we all know what we have to do. OK fair enough, the sevice is worth twenty Rand. Once in the parking lot, we all leave our bags in the van and head out with the safari vehicles for one last tour of Kruger.

After the usual check-in procedure at the park's gate we tell the driver to head straight for the location where we saw the lions the previous evening and sure enough there they are, they have just moved across the road, a few meters, not more. However, unlike last night, when we were alone, there are lots of cars now. The word about "ngoni fagapagati" spread quickly. Not so the news about the British car being overturned I guess. No one seems to be in the least apprehensive when we later drive by a couple of elephants.

There are rules of the road in national parks, one of them being to keep a safe distance from the animals and not to get in between the anumals and a car who got there first, But not everyone respects the rules and there is not much the rangers can do: they have to power of enforcement. Too bad, they should. After a while it gets crowded. We are lucky to have gotten near the lions first, and keep a safe distance of a good twenty meters or so but soon a big white SUV drives in front of us. All it takes is one rude driver to spoil the sighting for everyone else. Most drivers are polite and line up behind the first to arrive at the scene of a sighting, but some must think that if they don't get ahead first, someone else will. Anyway, after a few minutes the lions move on and some thirty cars turn on the engines and disperse around the park. The magic of last night was not to be again today.

It's clear that the lions are not afraid of people but still: why not just move out some and get away from noise, polluted air and large obstructive vehicles? Apparently they enjoy the warmth of the tarmac as compared to the cool grass.

At about nine o'clock we must give up and head back to the camp. It's time to bid farewell to our rangers, get on our van and head South: we have to hit the coast at Saint Lucia by tonight.

At around noon we go abroad. Yes, we do, as we drive into Swaziland, a small landlocked independent kingdom wedged between South Africa and Mozambique.

The country is famous for its polygamous king, who won't be among the friendly people we met along the way, and for lush green mountains, which we'll see a lot of during our five-hour crossing of the country.

Much of these mountains are covered in thick woods grown to make for timber, a major export and source of revenue for the country.

Arrive in Saint Lucia at sunset. It's a pretty posh vacation retreat for wealthy (and therefore white) South Africans, and there are many expensive cars with blond Afrikaans and English speakers to be seen. However we do see a lot of blacks with less fancy clothes and much less fancy cars around. Apparently they sleep and dine in the nearby townships, and only come to town for an evening stroll and a drink.

I would like to go and have dinner in one of these townships, but our driver steadfastly refuses to take us there. Too dangerous for us and for the van, and he would be in deep trouble with the agency's boss if anything should happen to either. Disappointing, I will have to try and find a way around this. Most South African live in townships, it would not make any sense to spend over a month here and not see one. I mean a black township. Of course even the exclusive pockets of white wealth that we have seen are strictly speaking "townships", that's just a name for an administrative division of the country's cities. But in the common jargon "township" has come to mean "black township" and also implies poor, dirty, unsafe. Or does it? Some South Africans even told me that Soweto is "no longer a township" because, unlike during the times of apartheid, it is now developed, reasonably safe, home to a growing middle class and a "must do" tourist destination. The borders of the meaning of township are changing. I'd like to find out. But not tonight.

We finally have dinner is at the "Ocean Basket", a chain of fish restaurants that is very popular across South Africa: good quality fish, informal but usually effective service, inexpensive. This restaurant is very busy tonight, this is a holiday town and the Christmas break is in full swing, but in ten minutes a table for twelve is available on the terrace and we can sit down with our driver. Most patrons are white but there are a few blacks.

Ocean Basket immodestly prides on being "the sole provider". Well... a bit ambitious perhaps, but I decide to take their word for it and order their "famed cape sole". It is perhaps not the sole sole around but is indeed quite tasty. The happy new year's eve dinner is made merrier by a few bottles of Sauvignon blanc from the Cape region. Maybe they are not the "sole" provider of good fish, but their formula is a successful one and they have opened shop in several other African countries as well as, for some reason which is not immediately obvious to me, Cyprus.

Back at the hotel we get a couple of bottles of bubbles and pop them at midnight. It's 2014!
Posted by Marco Carnovale