CKS Memorial and stroll around Taipei

Visit to an important landmark of the city of Taipei, whatever you think of the history behind the man.

The most obviously awesome sight is the change of the guard in front of the huge statue of CKS sitting between flags of the Republic of China. It takes over ten minutes for the procedure to complete, and there always are lots of people watching.

A highly controversial man he was: the museum takes you through the various phases of his life, from a traditional Chinese background to world leader dealing with Churchill and Roosevelt.

His father died when he was very young and he grew up attached to his mother.

He was married off to his first wife at age 14! Much later he met Soong Meili, the woman of his life..... but still had a concubine in traditional Chinese royal fashion!

The exhibition lavishes praise on him but I would not say there is a
cult of personality. his political and military failures and defeats are also covered in text and photos. 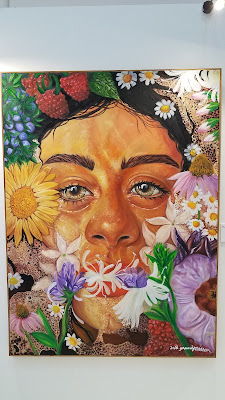 There are other art exhibitions in the mausoleum, one about Andy Worhol and another by YawaiMeika, a young (born 1990) lady painter who belongs to an aboriginal tribe in Taiwan. 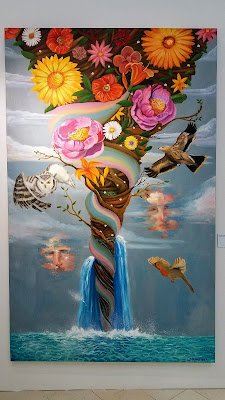 We also try our luck at the concert hall and theater but there is not much going on, the next concert is in a week's time! perhaps because of the New year celebrations, oh well.

A pleasant walk around the mausoleum, lots of people walking around, children playing, elderly watching on wheelchairs, it is a weekend family day out despite a cloudy and windy day. Many exotic plants, the grapefruit flowers gift us the most intense scent of the afternoon.

Lunch at a simple but friendly eatery just outside the memorial complex, Steamed chicken, pork intestines. Shared formica tables, paper napkins and metal chopsticks which I don't really like, too slippery. I later noticed packs of single-use wooden chopsticks but they are for takeout clients. As I was thinking to ask for permission to use them a Deliveroo driver came by to pick up an order.

On the way to the hotel, past lots of lit paper balloons for CNY,  a well-deserved foot and body massage, a popular feature of central Taipei, 1200 ntd, 1 hour foot and 1 hour body. 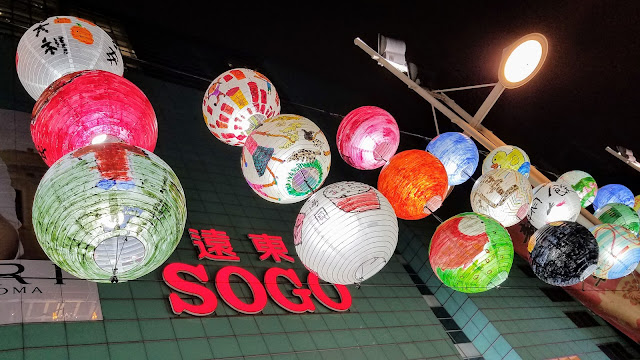