9. - 2 MAY: Dazu, legend of the country girl; board ship for Yangtse cruise

The highlight today is another Unesco WHS: the Dazu rock carvings dating from the 9th to the 13th century of our era.. I won't take time to describe them here, just click on the Unesco page linked above. It is a magical place, and worth spending a full day in. Maybe even two if your schedule allows. 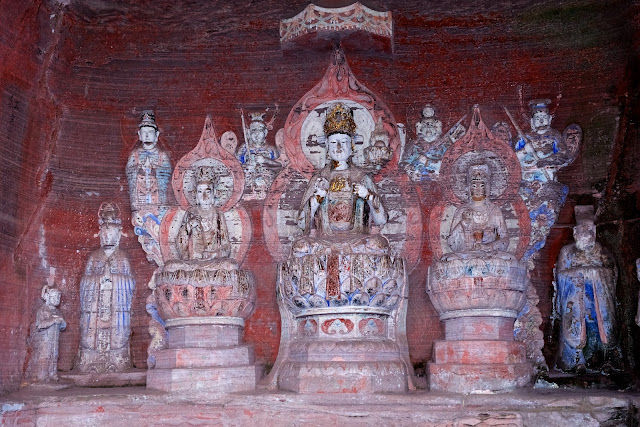 But I would like to share the "legend of the country girl", subject of one of the carvings, as reported to me by a local guide. I found it moving.

A beautiful country girl is invited to town by a bunch of boys she does not know. She does not want to go because she is shy, but they insist so much that she relents and accepts to follow them. And that's when her troubles start...

Once in town they take her to a party and force her to dance. But she is weak because of pregnancy and after many hours she collapses and aborts her child. Soon thereafter she dies of grief and goes to hell. Here she gemerates five hundred children with all the demons she meets in the ghastly place. Nonetheless, she never forgot her one child on earth and wants revenge against the town boys for her lost child. Strong of her afterwordly powers, she goes back to the town where she died, attends more parties and every night she eats a local child.

After this had been going on for a while Buddha Sakyamuni decides to intervene, sneaks up to her and kidnaps one of her 500 children. He then goes to pay a visit and finds her in a desperate state of mind and asks her why she is so cruel since, after all, she now has 500 children. What does she think of the mothers of the children she eats, Buddha asks her. She understands and stops eating children, at which point Buddha returns her kidnapped child to her. She then loved all children of the world for the rest of her life and became a goddess of children! 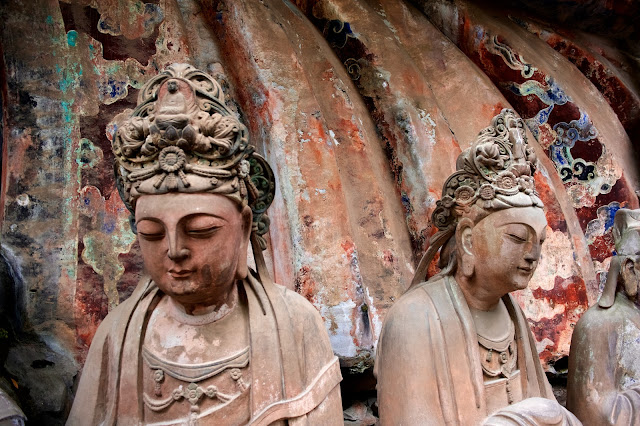 Recommended reading: This one below is one of several books on the Dazu carvings, a UNESCO World Heritage Site. It is the best of the bunch, great binding, good photographs and detailed descriptions, in English, of each one of them. It is expensive: there are cheaper versions of this book but this is the one to buy if you can afford it. It is impossible to convey the sheer size and majesty of the carvings in pictures, but this is as close as it gets.


In the US and worldwide buy it here:

In the UK buy it here:

My guide tells me another legend, which I struggle to understand: a woman who had a chicken was sent to hell because during her lifetime she had fed this chicken lots of prime food. In doing so she made the chicken fat. One man thought the fat chicken would be very tasty, killed it, cooked it and ate it. If the chicken had not been fed so well she would not have looked so mouth-watering and the man would not have eaten it. OK I'll need some time to think this through.


It is a rainy day, and the long bus ride makes a few of us doze off... I stay awake, mostly, and from my seat at the front of the vehicle keep looking at the two flags our nostalgic driver has glued to his dashboard...


After the visit to the carvings' site we go for lunch, but first we stumble into another great temple. The Longevity temple, built in 1178, and now again in use after decades of neglect during Maoist times.

In the evening we board our cruise ship, the "President", for a 3-day run down the Yangtse, which in some languages is referred to as the Blue River, the longest river in Asia and the main artery of life in China since time immemorial!
Posted by Marco Carnovale