12. - 5 MAY: Three Gorges Dam: Disembarkation and brief visit of Yichang 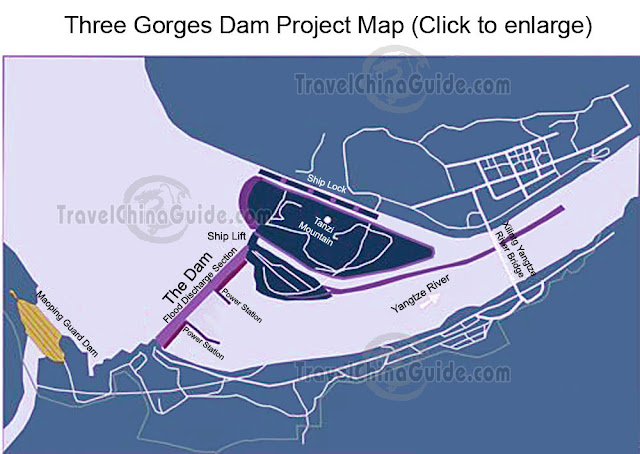 Today we get to actually walk on the largest dam in the world by capacity (the second after Itaipu by production of electricity), it is more impressive than my words can ever convey. To acces the site, one is led through a checkpoint, with metal detectors and all, and must take a local shuttle bus. It rides for about fifteen minutes in a closed town where dam workers and families live, a perfectly manicured model project to showcase the new China to domestic and foreign visitors. And there the show begins...

Underneath, 26 x 700MW turbines (for now, 6 more are being added) produce about 3% of China's electricity. Total investment has topped USD 26 Bn, almost half of which has been spent to relocate 1.3 million people from the areas flooded by the dam.

Five ship-locks allow ships to cross the dam in about four hours. Each lock is 234 meters long and 34 meters wide. Upriver the altitude above seal level is 175 meters at high tide and 120 meters at low tide, while downriver it is a fairly constant 65 meters, leaving a gap of 110 meters to be exploited for power generation.

A new ship "elevator" is being built which will allow smaller ships up to 3,000 tons to avoid the time consuming locks and go up or down the 80 meters gap in one go.

The dam was not built primarily for electricity however. The main benefit is flood control. Before the dam there was enormous damage to property and loss of human life at every inundation. Improved navigation on the Yangtse is a third reason why the dam was built. Ships can go through for free.

The dam has also turned into a tourist attraction. In 2010 almost 1.5 million tourists visited the site. With each tourist paying 115 Rmb (about 12 Euros, 15 USD) this is close to 20 million cash and rising pouring in each year. That's not counting gadgets, books, shirts etc on sale at the site.

The view from the specially contructed viewing platforms is imposing. Visibility was not great today but the whitish haze contributed to making the sight even more majestic. For photographers it is a difficult subject: how do you frame a dam? It would have been easier with a helicopter! However, the long perspective does provide clearcut lines to compose a frame. 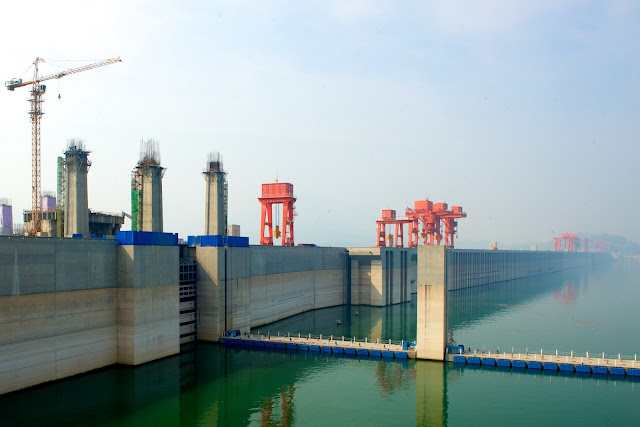 While aware of the costs to the people who had to leave their homes, and to the loss in art treasures in the areas affected, I came away impressed like few other times in my life.

In the afternoon we disembark at Yichang, and go to visit the Three Travelers’ Cave. A system of caves and cliffs so called because various travelers in the Tang and Song dynasties (9th to 13th centuries AD) stopped here and wrote poems on the rock.

But the most fun part of my stay in Yichang is in the evening. After checking in the hotel I go out to have dinner with Li. (The others stay and eat at the hotel.) She takes me to some night market where all kinds of foodstuffs are available, cheap, hearty, tasty and sooooo Chinese!