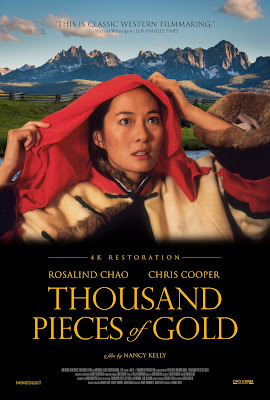 Lalu (Rosalind Chao) is a young Chinese woman who is sold by her impoverished family and transported against her will to the American West in 1880. Upon her arrival in California, she meets Jim (Dennis Dun), a Chinese "wife trader" who sells her to Hong King (Michael Paul Chan), a successful Chinese merchant who lives in an Idaho mining town. The two set off on the long journey to Idaho and eventually strike up a friendship along the way.

When they finally arrive in the rough, isolated town, she is distraught to discover that she is not going to be Hong King's wife. Instead, she is to work in his saloon as his newest prostitute under a new name, "China Polly". She is further dismayed when Jim abruptly disappears, leaving her to fend for herself.

The following night, when Hong King tries to sell her virtue to the highest bidder, Lalu violently refuses to submit to her would-be suitors and successfully avoids becoming a prostitute, thanks in part to the intervention of a kind stranger, Charlie Bemis (Chris Cooper), who turns out to be Hong King's Caucasian partner. She placates a furious Hong King and convinces him to allow her to be his servant and saloon maid in order to repay the cost of her purchase. Hong King agrees to let her buy her freedom for the impossible sum of a thousand pieces of gold.

Polly, as Lalu comes to be known, endures great hardship. At one point, she is sexually assaulted by Hong King. However, she refuses to give up. She works hard and makes friends with the local townspeople. She also grows closer to Charlie, who begins to fall deeply in love with her. Meanwhile, Hong King is beset with financial problems and decides to sell Polly to the highest bidder. In a rare stroke of luck, Charlie wins her in a game of poker. She moves in with him but insists they remain platonic and keep separate quarters.

Jim comes back and wants her to be with him but he then leaves her again when he finds out that she is living with Charlie. The "white demons" begin to run out the Chinese people from their town so it will be a purely white town and the Chinese will stop getting all of the gold.

Polly works in many jobs and saves money to go back to China and her family, but ultimately ends up falling in love with Charlie. She marries him and lives the rest of her life with him in a different area so she will not be harassed by the white demons anymore. (Wikipedia)

A brilliant film set up as a love story but in fact a telling history of racism in America. Right after the end of the Civil War, when blacks became free, it was the Chinese who were discriminated against in California, where many had come in search of fortune.

The film in itself is not the best structured one you will ever see, but it is a most interesting historical novel about a part of American history many forgot.
Read my other reviews of books about China here in this blog.
Email ThisBlogThis!Share to TwitterShare to FacebookShare to Pinterest
Tags (click on a tag to read posts on same topic): China, FILMS, history, racism, USA