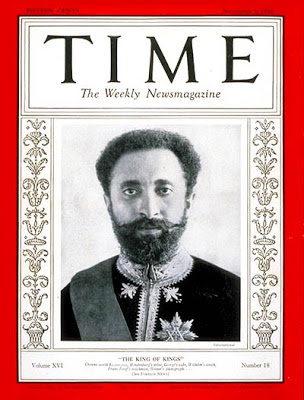 After the deposition of Haile Selassie in 1974, which ended the ancient rule of the Abyssinian monarchy, Ryszard Kapuscinski travelled to Ethiopia and sought out surviving courtiers to tell their stories. Here, their eloquent and ironic voices depict the lavish, corrupt world they had known - from the rituals, hierarchies and intrigues at court to the vagaries of a ruler who maintained absolute power over his impoverished people. They describe his inexorable downfall as the Ethiopian military approach, strange omens appear in the sky and courtiers vanish, until only the Emperor and his valet remain in the deserted palace, awaiting their fate. Dramatic and mesmerising, The Emperor is one of the great works of reportage and a haunting epitaph on the last moments of a dying regime.

I always knew Haile Selassie was not an enlightened leader, but this ook opened my eyes to just how unbeliavably backward and culturally blind he was.

The man despised "thinking". While essentially illiterate himself (everything had to be read to him) he frowned upon books and newspapers, even those favorable to him, because "reading" might lead his subject down the slippery slope of "thinking", the worst that could happen to them!

Absurd pomp ruled the imperial household while his people starved, and an obsession with conspiracy blinded the man to even the most basic common sense. He had to micromanage everything, and loyalty to him, not talent, was the basis for promotion in the public administration.

Absurd defense expenditures starved agriculture and industry of badly needed investments, let alone education, which was frowned upon as a matter of principle. University students were considered, by definition, troublemakers.

That he ruled Ethiopia so long says a lot about why the country is so backward. While he left power almost 40 years ago, and the responsibilities of his successors can not be denied, the Emperor's methods condemned Ethiopia to a miserable level of underdevelopment and ignorance from which is is only beginning to emerge.

The Emperor ended his life in a state of denial. He would say that if the Revolution that dethroned him was good for the people, he was for the Revolution!

Email ThisBlogThis!Share to TwitterShare to FacebookShare to Pinterest
Location: Ethiopia