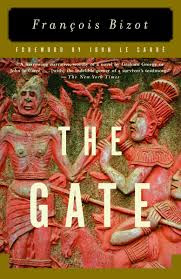 In 1971, on a routine outing through the Cambodian countryside, the young French scholar Francois Bizot was captured by the Khmer Rouge. Accused of being an agent of American imperialism, he was chained and imprisoned. His captor, Duch, later responsible for tens of thousands of deaths at the Tuol Sleng prison, interviewed him at length; after three months of torturous deliberation, during which his every word was weighed and his life hung in the balance, he was released. No other Western prisoner survived. Four years later, the Khmer Rouge entered Phnom Penh. Francois Bizot became the official intermediary between the ruthless conqueror and the terrified refugees behind the gate of the French embassy: a ringside seat to one of history's most appalling genocides.

Bizot was incredibly lucky to see what he saw and come out alive, then move on to survive in Phnom Penh for several more years and write a harrowing and unique account of the Khmer Rouge rule. The gate of the French embassy, where many notables of the old regime had found refuge, and through which they will have to walk to their fate in the hands of the communists. A unique first-hand experience that very few western writers have been able to share so much in detail. He talks to many revolutionary soldiers and discusses politics as well as the details of day-to-day existence, the next harvest, education. Reading him is almost as good as having been there, without the dangers and the discomfort!

Read about my trip to Cambodia here.

See my reviews of other books on Cambodia here in this blog.