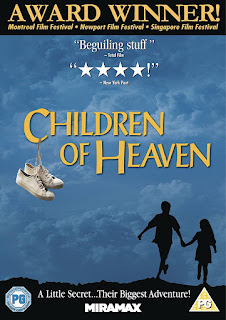 The accidental loss of a pair of shoes causes problems for a young Iranian boy in this award-winning family drama from director Majid Majidi. After Ali (Mir Farrokh Hashemian) fetches his little sister Zahra (Bahare Seddiqi)'s pink shoes from the cobblers, they are accidentally picked up by a garbageman.

With his family in financial troubles, Ali decides not to tell his parents about the loss. Instead, he agrees to share his shoes with Zahra.

The plan is that she will wear them to school in the morning and return them to Ali at midday, so he can attend afternoon classes. However, the arrangement soon brings further hardships and it's not long before Ali is forced to consider an alternative solution.

In 1998, it was the first Iranian film to be nominated for an Oscar for best foreign-language film by the Academy.

A lot of suspense in this movie with two children as protagonists of a story that takes us into the life of poor Iranians scraping a living at the margins of society. I see it as a celebration of family love as much as a not-so-indirect denunciation of social inequality in Iran. The two young actors are really talented! Very illuminating to look at the world, or at least at Iran, with the eyes of children who can find happy moments in adversity and overcome the odds.