A couple of hours in Paro in the morning, just getting acquaited with the small town and doing a little shopping. Locals are friendly if somewhat detached. The town is relatively clean, some ladies sweep the streets with simple brooms. We would have to look around when we return but the first impression is one of placid serenity.

In order to save a dozen hours of driving (we'll have more than plenty anyway) today we're flying east from Paro to Bumthang.

The small ATR 42-500 (the only one in the fleet of Druk Air we were told) tooks off after a short acceleration and made a steep ascent into the clouds. Some 45 minutes later the pilot pointed the aircraft's nose down to make a stopover at Gelephu.

A few passengers disembark and new ones board. Again the turboprop was the only game in town at the tiny airstrip and as the turboprop headed up to the sky one more time.

Landed at Bumthang again in dramatic scenery. It took them forever to unload the plane even though it was the only plane at the airport (probably for the whole day). No problem, we sat around the runway and took pictures. Then headed to our hotel, the Yugarling 3 star resort and checked in. 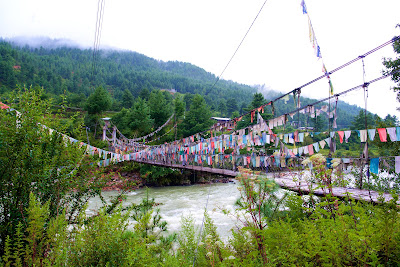 We spent the afternoon exploring the ancient temple of Jamphel Lhakhang. Quite understated compared to other in the country. We also went to Kurjey and Tamshing on foot. We walked over a suspended bridge that was once made of ropes but was recently reinforced with steel cables, like many in the Himalayas.

At the end of our long walk we stopped at a tea house that doubled up as a souvenir seller. A young girl managed the shop and let us use the toilet. Some of us bought some tea.

Bhutanese mountain roads, much like in India, are peppered with road signs that encourage cautious and responsible driving. I noted them down, some were pretty funny and often rhymed, and would note them at the end of each post on the day I saw them. Road sign of the day:

Mountains are pleasure
only if you drive with leisure