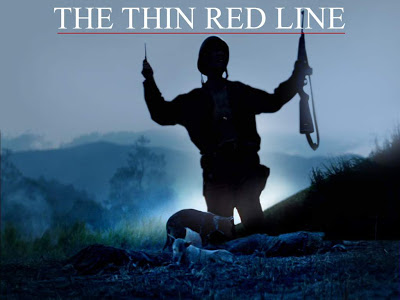 An excellent movie to understand the psychology of young men thrown into combat. Acting is very good and often superb. Location is well chosen (could not be done in Guadalcanal itself though) and special effects are well done.

The most interesting aspect is the various dialogues about the cynicism and unfairness of war in this world, "there only world there is". This is true of most wars of course, nothing specific about Guadalcanal. There is a scene at the beginning of the movie that suggests otherwise: a couple of soldiers are stranded on an idyllic island with happy indigenous villagers.

In fact it's too bad there is precious little in the movie that tells you much about the Guadalcanal battle itself. Only scant reference is made to the historical context and the significance of this island in the early months of WW II. I would have liked additional historical facts to be relayed through the dialogues and battle scenes.

PS: don't hold your brerath to see much of George Clooney, he only gets a couple of minutes at the very end.

And the American region version here: