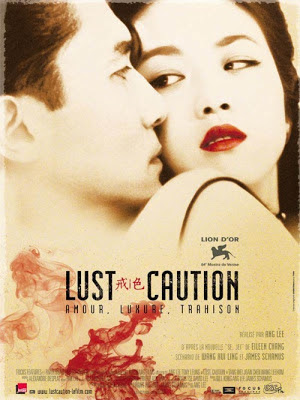 Yes, the emotions and lust take center stage most of the time, but I was attracted to the historical setting. Collaborationists in Japan occupied China faced agonizing struggles between survival and conscience. Their realization that all is lost after the American intervention in the war following Pearl Harbour is painful, but they have nowhere to go. Also the idealistic but amateurish youth in the heroic resistance movement are given the credit they deserve.

As for the lust and love part, I agree with most reviewers: it is a great movie, digging deep into human weaknesses. Both protagonists neglect their political duties to pursue their lust. Caution, in the end, is not enough...

You can watch a trailer of the film here.

You can read more reviews of film on China here in this blog.

In the US you can buy it here: