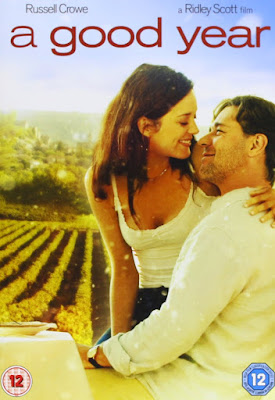 Director Ridley Scott and Russell Crowe--who first worked together on the Academy Award-winning Gladiator--are reunited in this romantic film, which is based on Peter Mayle's book A Year in Provence.

Crowe plays Max, a workaholic London bonds trader who doesn't know the meaning of vacation. When his uncle dies, leaving him a picturesque estate in the south of France, Max views it as an opportunity to cash in the vinery and pocket the profits. The film is reminiscent of Diane Lane's Under the Tuscan Sun in the way the scenery plays as much of a role in the film as its characters. The lush village and streaming sunlight portray Provence as an idyllic, magical place. Even Max falls under its spell. While not a particularly likeable character, especially in the early part of the film, Max also isn't a bad guy. Nothing that happens comes as much of a surprise. Still, while the film doesn't fully utilise Crowe's range of skills, the actor is charming in his role and A Good Year provides fine viewing. --Jae-Ha Kim for Amazon

A feel good movie to take you to Provence for a couple of hours. Crowe is not at his best, whereas Marion Cotillard is the real star.

The moral of the story is one I share: work to live, don't live to work. The setting (ruthless London city trader sees the light and a pretty woman and turns good) is a bit trite. But then again the point the movie is trying to make is a simple one. But a strong one.

But this is also a movie about wine. You learn a bit about French wine making specifically, though American wines enter the fray when Max's cousin comes into the picture. A couple of references are made to the France-California rivalry: I would recommend watching the film "Bottle Shock" together with this one. This movie was made the same year as the rematch of the  Judgement of Paris, again won by California over France.

The ending is predictable, sort of, but with a fun twist...