Stopover in Hong Kong on the way to Australia

click here to see this map in full size 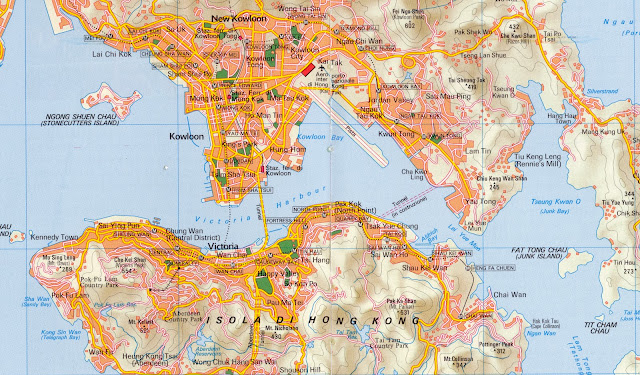 Cathay pacific offers me a day room at the hotel by the airport. Landing at this airport is an experience in itself. As we approach in the early morning hours it is still pitch dark. I can see the bright lights of the bustling city, which has just reverted to China a few weeks ago, in stark contrast with the black background of the mainland. During the final approach the  pilot comes on the intercom and advises that he is going to switch off the main cabin lights so we can see better outside. A few minutes later I understand why. The plane comes in low literally between rows of high rise buildings! You can almost see inside the bedrooms of the apartments as he makes a precise landing in the narrow strip of reclaimed land in Kowloon bay!

After leaving my stuff in the hotel and taking a shower I head out to town. Tsim Sha Tsui is disappointing, the famous shopping district seems to be little more than a gigantic tourist trap. Store owners are unfriendly and prices not particularly cheap. I buy nothing, though I have a great Chinese meal in one of the malls!

I then take a ferry to Hong Kong island, and stroll around the insanely dense concrete jungle for a while. Countless new flags of Hong Kong flutter in the light wind, it's been only three months since the the last British governor left and the old flag was lowered for the last time after 150 years of colonial rule.

Just a glimpse of a bustling city that has now been granted fifty years of autonomous rule (the Basic Law agreed upon by London and Beijing envisages "one country, two systems"). We'll see if in fifty years Hong Kong will have to change to accomodate China or, perhaps, China will have changed and resemble Hong Kong.