Today we fill up Giallina at a new gas station. They don't know us so we must be a bit circumspect in negotiating a price. They readily agree to sell for 28 ZL/liter (instead of the usual 18 we pay at our friends' station but much less than the official 75 we should pay as foreigners).

Easy and pleasant trip to Czestochowa. We drive through several villages. In Sulmierzyce the local parish priest is excited to see our Roman car plate and insists to take us into the church and introduce us to the parishioners. Many people, they came for the Easter blessing.

Interesting to note that in this church, and others in small villages, a statue of Christ is guarded by two statues of medieval soldiers. 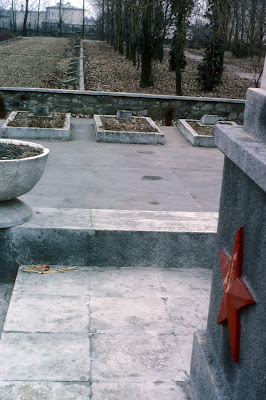 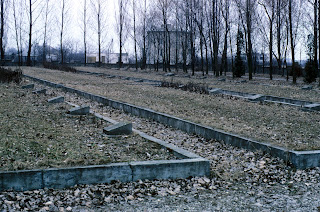 We keep driving along and run into a Soviet military cemetery. No crosses of course, just red stars and plain stones on the graves..

The Soviets are not loved in Poland, to put it mildly, but the official party line is that they liberated the country from the Nazi invasion. Which is true, except that they had partitioned the same country with the Nazi in 1939, and except that they did not really "liberate" it, as in give it freedom, but rather subjected it to a new communist dictatorship.

You can read more about this in many books, including the following.

When we get to Czestochowa it is really cold, there is a lot of snow on the ground. The Jasna Gora monastery is imposing, surely the most impressive site we have seen in Poland so far. It is the hear of Christianity in Poland. here, almost a year ago, Pope John Paul II delivered his farewell speech at the end of a trip that stirred emotions in Catholic Poland.


Tonight we stay at the Hotel Orbis Patria, the three of us have to squeeze into two beds, but there is no choice... we are used to it.

You can buy a beautiful reproduction of the Black Madonna here