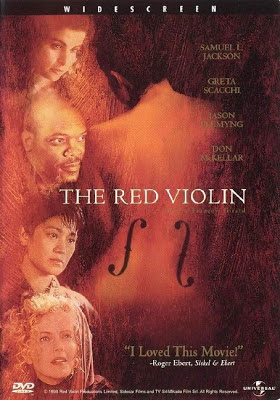 An epic adventure of mystery and obsession unfolds when Charles Morritz (Samuel L. Jackson), an appraiser of rare musical instruments discovers a one of a kind red violin at a prestigious Montreal auction house. Convinced he's found an authentic long-lost masterpiece, Morritz uncovers the spectacular journey of the priceless violin, how it changed hands and lives of all who touched it. When the violin's shocking secret is finally revealed, Morritz must wrestle with his own demons and choose between burying the truth and risking everything.

Excellent fiction, but the story must resemble that of quite a few of the legendary violins produced in Italy in the XVII and XVIII centuries. They have passed from player to player for generations, toured the world and keep stunning listeners ever since.

This film is certainly a bit beyond the credible. The ending is especially so. Hard to believe any one violin has actually gone through anything resembling the Red Violin. But each individual adventure experienced by the instrument has certainly occurred for one or the other of the real ones. The myth of Stradivarius and Amati endures because of this.

The story is captivating, and the cast well picked if not glamorous. This film is said to have been inspired by the vicissitudes of the Mendelssohn violin currently played by American violinist Elizabeth Pitcairn.

You can watch the trailer of the film here.