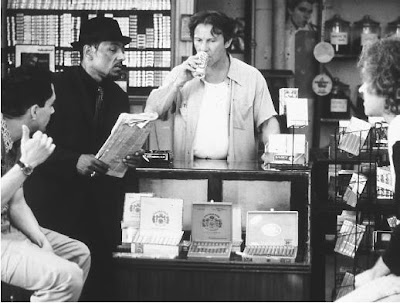 Departing from the conventions of Hollywood story-telling 'Smoke' is constructed like an emotional jigsaw puzzle: pieces interweave and interconnect to form an intricate whole. Unrelated characters - a New York cigar store manager (Harvey Keitel) who has taken photographs in front of his store at the same hour every day for 14 years; a novelist (William Hurt) unable to go on writing after his wife is killed in a random act of street violence; a man (Forest Whitaker) who ran away from his past and tries to start over after accidentally killing his wife. These characters, amongst others, making their way through the lonely urban landscape, might seem to have little in common. But in the couse of this motion picture they cross paths by chance and end up changing each other's lives in indelible ways.

I first saw this movie when in came out in 1995 and then bought the BD in 2012. It is still am amazing film about human nature, love and New York. This kind of stuff could only happen in New York. People of entirely different backgrounds crossing paths for an incredible series of adventures and misadventure. Yes, incredible, but then again this is a movie.

However the emotions that play out in the story are very real, and no doubt will resonate with many viewers.

One last note about the title: smoke is the common denominator of all the stories that intertwine in the course of the film, which is centered around daily life in a cigar store. A pretty unique place where the owner, disenchanted with life, can meaningfully put together a series of albums of four thousand pictures of the same place. I won't tell you why this actually makes sense so as not to spoil the film for you.

And, how do you weigh smoke? You actually can, really, just watch the movie!

A good bottom line from the various stories: stealing is giving, lying is telling the truth.

A deep, captivating, dry humor, no nonsense film not to be missed.