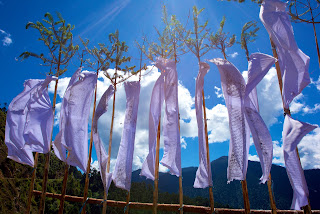 We wake up at 6 o'clock, have breakfast and hit the road by 7. Low clouds at dawn give room to a sunny morning very quickly and it promises to be a gorgeous day.

Very long and tiring drive on a road which badly needs some repair work. Bhutan makes a lot of money by imposing expensive daily charges to tourists, hopefully some of that money will go to road improvement.

We drive through the Ura valley and over the Thrumshing pass (3800 meters) one of the highest motorable roads in the country. Lots of multicolored prayer flags, and many white ones as well.

Stop for lunch in a local restaurant, the Wogon Villa, in Sengor village. Momos and other local veggies and meats. Not too much variety but strong and inviting flavors and smells, I love it.

Our guide today tells us about the African snail infestation in Bhutan. The snails got into the country who knows how, they liked it and are now multiplying out of control. Good Buddhists cannot "kill" them of course, so the king approved of a policy to "reduce" their population. 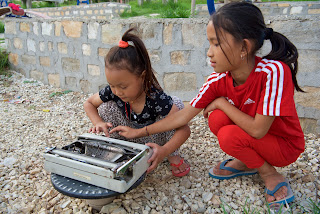 Most of the country is buddhist, except for substantial minorities of Hindu practitioners, mostly Nepali immigrants in the south of the country, and amounting to some 25% of the total population. The first Hindu temple was built in 2012, in Thimpu.

Thsering tells us how Christian missions have been welcome in Bhutan for some time, but no preaching is allowed, that was the deal with the government as a condition to be permitted to operate. Yet, in the last few years some Christians, both foreign and Bhutanese, have been arrested for displaying their faith. In theory the constitution of 2008 provides for freedom of religion but in practice it seems there is still some way to go. No religion is allowed to do any proselytism at all actually. 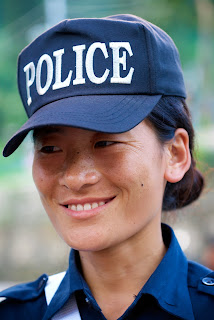 Accommodation at the Wangchuk resort. Before dinner we take a walk around town, lots of people in the streets, street vendors, old folks spinning a prayer wheel in the main square of the town. Two kids play with an old typewriter, who knows maybe it belonged to their grandfather.

At some point I strike a conversation with a policeman and a policewoman, very relaxed and unarmed. It's hard to think what police would have to police here.

A public garden/playground is full of kids running around and playing with their toys.

We have dinner and hit the sack early as tomorrow it is going to be a long and, we already know, momentous day.

Wish you a safe and happy journey