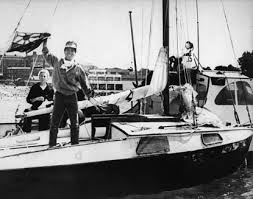 A powerful hymn to the human spirit, Alone Across the Pacific by renowned Japanese director Kon Ichikawa (An Actor's Revenge, The Burmese Harp, Tokyo Olympiad) tells the extraordinary real-life story of one man's obsessive quest to break free from the strictures of society. In 1962, Kenichi Horie (Yujiro Ishihara) embarks on a heroic attempt to sail single-handed across the Pacific Ocean.

Leaving Osaka in an ill-prepared vessel, the Mermaid, the young adventurer must overcome the most savage of seas, the psychological torment of cabin fever, and his mental and physical breaking point, if he is ever to reach the fabled destination of San Francisco's Golden Gate Bridge. Using Horie's best-selling logbook as his source, Ichikawa portrays the epic struggle of man against nature.

'Scope cinematography with Horie isolated in the oceanic expanse of the frame and a score by celebrated composer Toru Takemitsu, add to the drama of a film for which Ichikawa received a Golden Globe nomination, among other accolades.

This is Traveling with a capital T. Traveling for the sake of traveling. The real story of Kenichi Horie's first of many sailing challenges he set for himself. In 1962 he was a young ambitious man in Japan, a country still recuperating from a devastating defeat in WW II. He felt for his country, and said that for a nation with a long maritime tradition it was a shame no one had yet sailed solo across the Pacific. He wanted to do it for Japan.

And yet he wanted to leave Japan, where he suffered because of the cultural and social restrictions that hampered his wandering spirit. He wanted to be free of Japan as much as of his own family, whom he loved but whose interference with his dreams he could no longer put up with. He was fascinated by America, the power that defeated the Japanese Empire and established such a pervasive presence on the islands. He wanted to sail under the Golden Gate bridge of San Francisco. And he did, after ninety-four days of excruciating adventure and hardship.

He did it in a Japanese way: carefully preparing everything, meticulously executing the plan he had drawn, even trying to apply for a passport (he did not manage to get one in time) because he wanted to follow the rules. It is ironic that when he completed his feat his father, instead of being proud, promised to the media that upon return the son would apologize to the nation for having contravened the rules. (It was not allowed at the time for small boats to leave Japan.)


In the US buy it here

Email ThisBlogThis!Share to TwitterShare to FacebookShare to Pinterest
Location: Taiwan

What is music? How is it constructed? How is it consumed? Why do you enjoy it at all? Nicholas Cook invites us to really think about music and the role it plays in our lives and our ears. Drawing on a number of accessible examples, the author prompts us to call on our own musical experiences in order to think more critically about the roles of the performers and the listener, about music as a commodity and an experience, what it means to understand music, and the values we ascribe to it.

This very short introduction, written with both humor and flair, begins with a sampling of music as human activity and then goes on to consider the slippery phenomenon of how music has become an object of thought. Covering not only Western and classical music, Cook touches on all types from rock to Indonesian music and beyond.

Music is an agent of ideology: we must not just hear it, but "read" it as an intrinsic part of the society and culture that produces it. Until the second part of XX century mostly studied in conservatories, not universities as musicology. Does music need words? Can it be read without words? Yes, though a few words can help set the context.

Beethoven is a recurring reference for the author. He did not just revolutionize music, he had something to say about the decay of aristocratic Europe. He never wanted a fixed, salaried position: he wanted to write the music he wanted to write, when he wanted, if he wanted. Cook argues this was the opposite of Rossini, who thrived in that Europe of pomp and ostentatious luxury. Others would disagree: Rossini mocked the rich and the noble in his operas, just look at the Barbiere di Siviglia, where everyone is a crook.

Mass production of records, now internet streaming: talk about music as you talk about cuisine: everything is available everywhere. Also, the average technical quality of musicians is on the rise, musicians face harder competition to emerge.

This is indeed a very very short introduction to music, but a useful one to stimulate interest especially for those who maybe listened to music but never thought about it, and never "read" it!

Buy the book on Amazon here:

: Combining authority with wit, accessibility, and style, Very Short Introductions offer an introduction to some of life's most interesting topics. Written by experts for the newcomer, they demonstrate the finest contemporary thinking about the central problems and issues in hundreds of key topics, from philosophy to Freud, quantum theory to Islam.
Posted by Marco Carnovale No comments: