Breakfast and identity in Bali, Indonesia 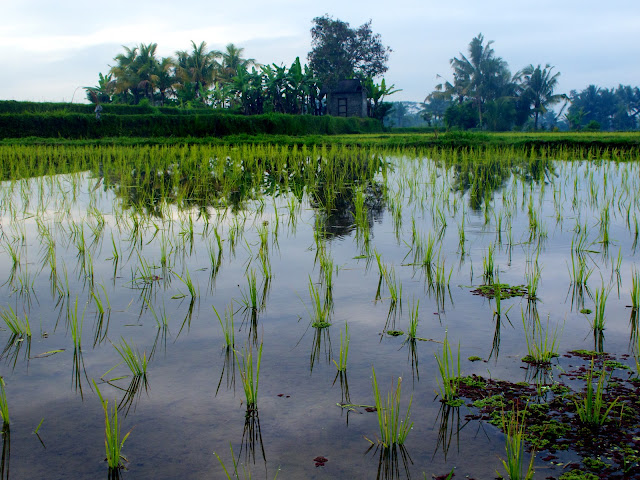 I am about to have a delightful breakfast in the terrace of my hotel in Bali, which is adjacent to some fastidiously manicured rice terraces. The early morning sun shines on the water that fills the paddies. I have just taken a short walk around the terraces to photograph the reflections of the seedlings on the muddy water, and have returned to the table for a hearty Indonesian breakfast.

A waiter comes to my table, he has obviously been trained to have a personal approach to each guest, as he greets me warmly.

Waiter: Hello Mister Marco, so you are from Belgium?

Me: Hi, good morning, yes, well I live there but I am Italian.

W: Oh I see, so Belgium is near Italy?

M: Well kind of, it's a two-hour flight, Belgium is on the Atlantic coast in the North of Europe.

W: Oh I see, on the Atlantic, so is it near Canada?

M: No no, it's in Europe, between France and Germany.

W: Ah ok. I thought it was landlocked. I once flew over the Atlantic, I remember it's extremely deep. And the waves are huge! But France and Italy are the same right?

M: Not really, different countries, though we are all in Europe now: no borders, same money, most laws are the same.

M: Ah well yes I suppose in a way it is.

W: And Belgium too?

M: Yes of course, Belgium too.

He may not know Belgium's exact position on the map, but he clearly knows about the Atlantic. How could he guess the depth of the ocean and size up the waves from an airliner is anyone's guess. But he understands Europe as well as any of us who live there.

The conversation is very useful for me: it drives the point home that I, really, have no homeland. My roots are weaker than those of the rice seedlings that bend in the light morning wind. Do I have an identity? Do I really need one? Do I care? Not really. I suppose I just have multiple identities, and it's too complicated to explain over breakfast.

Lesson learned: keep it simple when trying to explain where you come from.
Posted by Marco Carnovale