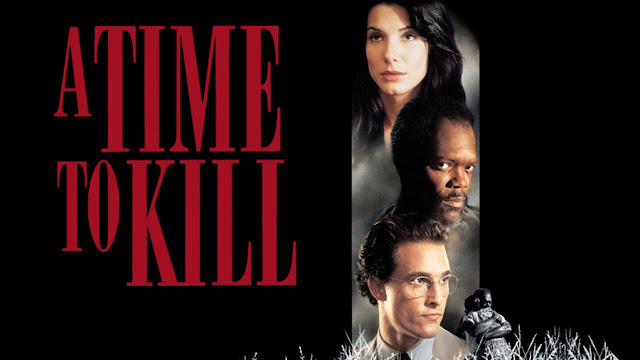 John Grisham's explosive novel is brought to the screen by Joel Schumacher. Carl Lee (Samuel L. Jackson) seeks violent revenge after his 10-year-old daughter is brutally assaulted. Lawyer Jake Brigance (Matthew McConaughey) has to save him from Death Row, against mounting pressure from both the Ku Klux Klan and the Civil Rights Movement. Sandra Bullock stars as Brigance's student lawyer aide, while Kevin Spacey appears as the ruthless prosecutor, Rufus Buckley.
Review
A good movie to understand the deep roots of racism in the southern US. The obvious theme is racial prejudice at a jury trial where white jurors are expected to convict a black accused murderer, Carl Lee.
The real surprise comes when Carl Lee chooses a white lawyer (Brigance) to defend him. And he chooses him not because Brigance is not racist, but because, despite all he says, Carl lee thinks in the end he really is: he defends blacks but does not make friends with them, their daughters don't play together. So, as a white man who does not mix with black, Brigance is more credible to a white jury!
Email ThisBlogThis!Share to TwitterShare to FacebookShare to Pinterest
Tags (click on a tag to read posts on same topic): FILMS, politics, racism, USA